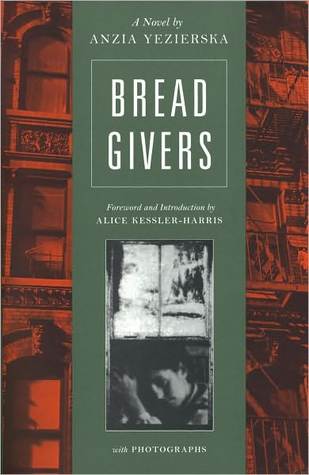 I’m not quite sure how I feel about reading fiction in a history class. I mean, I understand the reasoning—if a novel or short story is auto-biographical, then it, obviously, reflects its historical time period—but I still feel a little unsure about reading “The Yellow Wallpaper” and “Bernice Bobs Her Hair” in a solely historical context. That’s probably because it’s impossible for me, the Literature major who took so many Literature courses they won’t let her take anymore, to discuss fiction without digging. So, on the one hand, it’s good for me, because I love talking books; on the other hand, I’m still a little confused. But perhaps our discussion of Anzia Yezierska’s novel will help me see the light…

Bread Givers is told in the voice of Sara Smolinsky, a young Jewish Russian immigrant living in New York with her family—her parents and her three sisters. While her mother and sisters desperately struggle to make money, her father is only concerned with studying sacred Jewish texts, claiming that his women should support him. In short order, the young Sara watches her father marry off her sisters to increasingly awful men, and vows that if she does marry, she’ll marry for love, not because her father wills it. As her father’s oppression grows worse, Sara runs away from home and begins a slow journey from poor immigrant to Americanized schoolteacher.

My family is Roman Catholic, but I’m not. My brother and I are quite far apart in age, so I think he did attend as a child, but when my mother was finally faced with her daughter, she determined that I would never be raised in the Catholic Church, because she felt it was misogynistic. An alternative church, however, never presented itself to my parents, and so I ended up religiously feral. While that’s had some drawbacks and we did have to deal with that whole weird femmephobic period I went through in middle school, my mother’s plan ultimately worked: her daughter was a natural feminist. I mention this because the misogyny Sara’s father spews and assigns to his religion is truly and astonishingly hurtful. Even protected by a buffer of ninety years and my religious wilderness, I had difficulty getting through this book because I would sometimes feel just sick at what Sara’s father thought, said, and did about women (let alone how abhorrent of a person he is on top of that).

But, of course, that’s the point. Sara rages against these views as her father refuses to lift a finger to help his family earn; in fact, he turns away a wealthy suitor for one of his daughters because he’d be “stealing” one of his sources of income from him. She has to live with the consequences of his actions, and when she can’t take it anymore, she leaves and pulls herself up by her bootstraps. But it’s not a simple story of rebelling against one’s oppressively old-fashioned parents (while Sara’s mother suffers too, she still indulges her husband); Sara still identifies as Jewish, and must try to reconcile her concept of being, well, a person with Judaism as flavored by her father, something she’s still struggling with when the novel ends. On top of that, becoming Americanized takes hard, hard work—and Sara must still struggle with being an outsider, even as she goes to college and earns a prestigious scholarship that lets her jumpstart her life as a teacher. And even teaching isn’t the perfect escape. For such a deceptively simple coming-of-age novel, Yezierska complicates Sara’s accomplishments without robbing her of them. It’s really remarkable.

All of this might make Bread Givers sound like a dour and oppressive book. But there are moments of beauty and transcendence in Sara’s world. Sara shares my taste for aeries (she’s forever looking for a simple, clean room with lots of air and emptiness) and it’s when she finally meets a man who shares that love that she begins to take the first steps towards romantic fulfillment. (Satisfyingly, Sara sends a suitor packing because she refuses to settle for anything less than she deserves.) Faced with her outsider status at college, Sara takes solace in the night sky in a refreshingly non-twee way. And as she leaves New York for college, she misses the rhythm of the city:

I wanted back the mornings going to work. And the evenings from work. The crowds sweeping you on, like waves of a beating sea. The shop. The roar of the rushing machines. The drive and the thrill of doing things faster and faster. The pay envelope. The joyous feel of money where every little penny was earned with your own hands. (129)

Bottom line: Anzia Yezierska’s Bread Givers focuses on a woman struggling to reconcile her concept of self with her father’s hatefully misogynistic interpretation of Judaism without sentimentality, allowing Sara’s accomplishments to stand on their own with all their attendant flaws. And the writing, though simple, has moments of beauty. Well worth a read.

I bought this used book from Amazon.