Once Upon a Time: Season One
based on various fairy tales 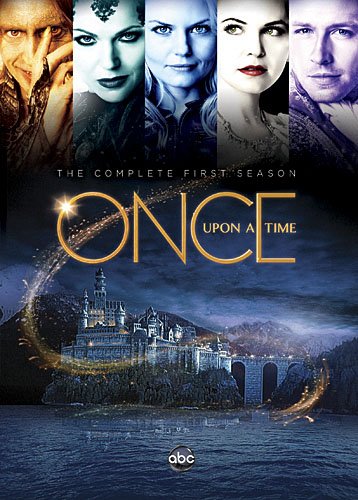 It’s really amazing that I didn’t pick up Once Upon a Time as soon as it started airing, given my status as a Disney freak and a general sucker for women with swords. But I didn’t realize ABC was exploiting its Disney connection to the hilt until I heard Jamie Chung had been cast as Mulan and then, after spending time with my friend Anna from high school who loves the show, I decided it was time to catch up for the second season. Which translated into binging the first season in a single weekend while cackling, screaming, and, yes, crying.

Once Upon a Time opens with the Evil Queen, thwarted by Snow White and Prince Charming, deciding to curse the entire world of fairy tales by destroying their world and transporting them to ours, where they’ve lost their memories of being fairy tale characters and are trapped in the town of Storybrooke, Maine. The only hope to break the curse is Emma, Snow White and Prince Charming’s daughter, sent to our world moments before the destruction of her home world, so that she might achieve her twenty-eighth year (go with me) and break the curse. Unfortunately, nobody’s told Emma, now a cynical bail bondsperson who believes she’s an orphan, who doesn’t believe in magic. But on her twenty-eighth birthday, the child she gave up for adoption, Henry, finds her, and begs her to come back with him to Storybrooke to break the curse. While she doesn’t believe him, she goes to make sure he’s okay—after all, he swears his adoptive mother is the Evil Queen… The show jumps between the present in Storybrooke and the past in the world of fairy tales as Emma reluctantly finds herself stuck in Storybrooke and seeking her destiny.

I read In the Hand of the Goddess and watched the first few episodes of Once Upon a Time around the same time; I told my roommate I was building myself a fortress of camp fantasy to keep the adult responsibilities away. (October was stressful, y’all.) Anyone who enjoys the show will be the first to tell you of its camp delights. I spent the episode devoted to the Huntsman in hysterics, as Regina, the Evil Queen, kept going “YES! THIS IS THE RUTHLESS, SOCIOPATHIC KILLER I NEED!” even as she watched him weep over killing things and generally frolic with wolves. If you’ve ever wondered where all that cheesy nineties fantasy went, it went directly here and, honestly, it’s amazing—even as everyone else totally commits to both the real world and the fairy tale world, Regina and Rumpelstiltskin snark and comment on the proceedings. When Regina meets Belle by chance and tells her about the power of true love’s kiss, she excuses herself for implying that Belle should kiss her cursed master: “I’d never suggest a young woman kiss a man who holds her captive. What kind of a message is that?”

As you may have gathered, while the show more or less claims it’s based on fairy tales, it’s really based on the Disney canon. So it includes novels like Alice in Wonderland, The Adventures of Pinocchio, and there is a nod to “The Little Mermaid”, even as it touches fairy tales Disney hasn’t touched yet, like Little Red Riding Hood and Hansel and Gretel. But wherever it pulls its sources from, Once Upon a Time is content to play merry hell with the content, fitting Rumpelstiltskin into fairy tales other than his own to give us one of the best characters in the show and otherwise behaving like a kid with a grab-bag of action figures. But, for the most part, it’s fairly thoughtful about its links and how it reinvents and retells fairy tales. I won’t spoil it, but Once Upon a Time’s version of “Little Red Riding Hood” is fantastic. Sure, there’s some just silly and delightfully melodramatic plot twists here and there (secret twins! dwarves hatch from eggs! municipal elections!), but, for the most part, I honestly enjoyed the way this show fleshes out its characters and retells these stories while remaining true to its earnest, sappy heart.

So it’s camp to the hilt, Disney, and thoughtful, but I think what continues to blow me away about Once Upon a Time is the sheer amount and variety of female characters. Statistically, the main cast is split evenly down the middle, but Emma is our lead, Regina our main antagonist, and any given episode will usually give us women being, well, people. For instance, we’ve got two female characters that, in the hand of lesser writers, would be flat and awful; Kathryn, the third wheel in the Prince Charming and Snow White love triangle, and Ruby (Red Riding Hood), who is introduced to us when her grandmother snarks at her that she’s sorry she interrupted her plans to sleep down the Eastern seaboard. And both of them, by season’s end, are fully developed human beings, shown to be resourceful, honorable, and devoted to their friends. Female strength of all kinds, from general butt-kicking to faith to sheer, quiet strength of character (this show made me adore Belle, and I normally don’t care for her), is one of the main themes of the show. And I haven’t even talked about how the show’s value of friendship and value of love that sidesteps traditional fetishization of romantic love and focuses on commitment, communication, and mutual respect.

What a mindblowing concept for network television.

Bottom line: Once Upon a Time’s first season is Disney to its core, camp to the hilt, and full of amazing women and amazing interpersonal relationships. Well worth a watch.

I watched the first season of this show on Netflix Instant.