In the Hand of the Goddess by Tamora Pierce 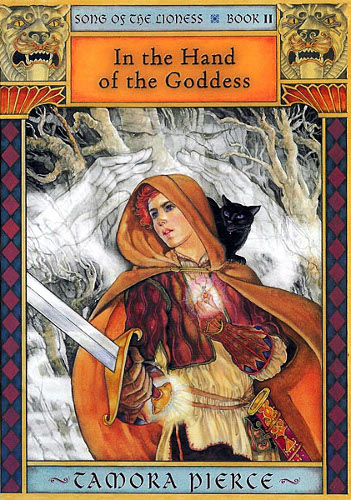 It’s always a bit weird, trying to read children’s series that are fiercely beloved by people you know. Even the sharpest critic grows soft when it comes to a story that changed their lives, and I totally get that—God knows I get testy when people talk smack about The Legend of Zelda: Ocarina of Time. (Despite supposedly being a kid who likes books, wee Clare did not read much.) But even though I can’t get into the groove these people have enjoyed with these stories, I can get into a groove of my own with it. A campy, cackling groove. (Oh, how appropriate for Halloween!)

In the Hand of the Goddess finds Alanna Trebond, the girl who disguised herself as a boy so she could become a knight, experiencing further adventures. After an encounter with the Goddess that proves she is destined for greatness and gives her the animal companion Faithful (who can talk!), Alanna applies herself to her training as a knight while trying to hide her true gender, known only to Prince Jonathan, to whom she is squire, and George Cooper, King of the Rogues. As neighboring Tusaine declares war on Tortall and the dark magic of Duke Roger, Jonathan’s usurping uncle, threatens court, Alanna must prove herself as a knight to defend the country—and perhaps the man?—that she loves.

After struggling with Alanna: The First Adventure, I came to In the Hand of the Goddess with different expectations. The sort of expectations I usually bring to, say, a fantasy movie made in the eighties, which is a fair enough comparison, seeing how In the Hand of the Goddess was published in 1987. I mean, this a novel that opens with our heroic violet-eyed, redheaded protagonist discussing her awesome destiny with the goddess she is the chosen of, mere feet away from a mare named Moonlight and a talking, violet-eyed cat, as well as containing the kind of villain that have lackeys hurling themselves at their feet and say, “My Lord, I have failed you!”. Subtle it ain’t, which is part of its camp charm: I would have been over the moon at this as a kid.

This isn’t to say that Pierce isn’t talented; she clearly is. As hilariously thick as Alanna can be (I just spent the last twenty minutes regaling my roommate with the love plot of this novel, which involves “GOSH HE KISSED ME DOES THAT MEAN HE LIKES ME” and “I’M SCARED” “LET’S BE SCARED TOGETHER” cue making out), she is an engaging character you get invested in and hope that she can overcome her emotional issues to be fully present in her life. Even though the novel is quite episodic, you keep turning the pages. Pierce’s style is still rough; I must admit that I cackled out loud when I saw that she’d put “sneaked” instead of “snuck” in a sentence. And the pacing is a little jerky—we keep slowing down and speeding up unevenly, in order to get Alanna, who is fifteen at the beginning of the novel, through her Trial of Ordeal, which occurs when she’s eighteen. (I’ll be honest; I expected the climax here to occur in the fourth novel in the quartet, so I have absolutely no idea where this story is going now.) If it didn’t affect anything but the chronology, I might forgive it, but I feel like it really hurts the character development.

For instance, Alanna, in the first novel, declared her utter distaste for the world of the feminine (much to my nun-loving dismay. I mean, c’mon, Alanna: Warrior Nun, you’d totally read that), which I took in stride, because I thought she would grow into her own gender identity and respect the gender identity of others. But here, in the middle of the novel, she tells the only adult woman who knows her secret that she wants to learn how to dress and behave like a girl, and even begins exploring the market in female drag. That, in itself, isn’t cause for alarm, but no reason is ever really given—it’s treated as if it’s natural or even expected for Alanna to outgrow her butchness. Even in a children’s novel, you have time for Alanna to explore this, especially since she occasionally finds herself having to dance with fine ladies who can show her the upside of being female in this patriarchal world. And, I have to admit, I would loved a bit more character development in the love story, but I think that might be because I am totally on the wrong team here. (Maybe.) Still, highly enjoyable.

Bottom line: I’m too old to love it unconditionally, but oh, can I enjoy the earnest, camp fantasy of In the Hand of the Goddess. The writing is a bit rough, but Pierce’s talent shines through. Worth a shot in the right mindset.

3 thoughts on “Review: In the Hand of the Goddess”