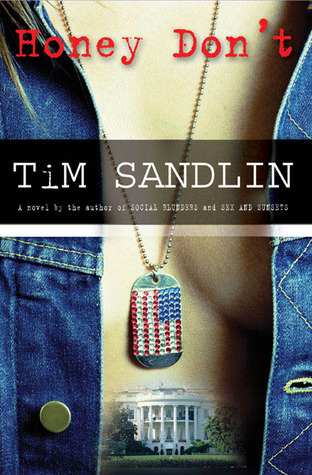 A novel that skewers the inanities of our age, with results that are outrageous, wildly funny, and utterly subversive. It’s Sandlin at his most maverick best.

Set in the very near future, Honey Don’t features a hit list that runs the gamut: from a goatish President dying in flagrante, to an aging Don appalled by modern manners; from a certifiably stupid mafia bagman fleeing both the Secret Service and the mob with $656,000 of dirty money in a locked attaché case and the President’s head in a carry-all, to a coke-snorting, blow-dried VP who has suddenly caught the brass ring. Circling them are conniving White House staffers, corrupt politicos, sleazy journalists, and rancid pro-football coaches-all adding up to a DC three-ring circus.

And in the center ring is the eponymous Honey, one of those Texas women cursed with a given name that condemns her to a lifetime of cheerleadering. But this daddy’s little girl is a free spirit in full rebellion, and her take on life-offbeat but on target-is the heart and soul of this antic tale. And, as always with Sandlin, it’s the women who have the last laugh.

Honey Don’t is yet another of those initial Nancy Pearl recommendations from the beginnings of my reading list (back when it was flirting with one hundred, instead of six hundred). While I rarely crave political satire, Honey Don’t has stuck with me for the sheer title—it’s so expressive and so odd for political satire, so I’m eager to see what Sandlin has done with the thing.

Gordon Hauptfleisch, writing for Blog Critics, enjoyed the sheer lunacy of it all. David Abrams, writing for January Magazine, enjoyed the tender core underneath all the cynicism and lunacy. Publishers Weekly gave it a good review.