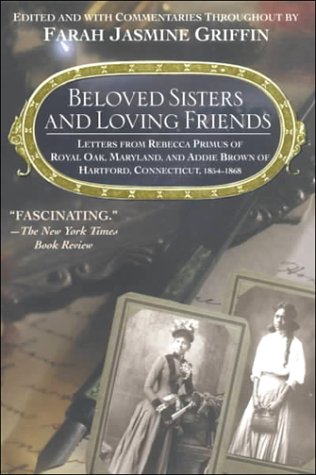 So my history class (A Multicultural History of American Women, a title I will never forget) is… interesting. On the one hand, I’m never at my best at 2 PM; one of my professors cheerfully informed me that the human body naturally wants to take a nap then, just as I was walking to said history class. On the other hand, all the reading is very interesting. Most of our readings come straight out of our textbook, Women’s America, so I was very excited to pick up the first of our actual texts of the semester, Beloved Sisters and Loving Friends. I mean, a collection of letters written by two free women of color in the 1800s in America? Sign me up, son! But, unfortunately, as I began to actually read the thing, my enthusiasm flagged…

Beloved Sisters and Loving Friends collects the letters of Rebecca Primus, a privileged black woman from the North who went South to teach during Reconstruction (maybe you’ve heard of the Primus Institute?), and Addie Brown, her lower-class friend, who worked as a servant in New England. Addie’s ardor for Rebecca is evident, and part of the motivation for their copious correspondence, but her approach to marriage shows us how complex marriage and love were—and still are.

I never used to really like nonfiction. Once upon a time, C. S. Lewis’ weirdly alienating statement at the beginning of The Voyage of the Dawn Treader about how economic books are the “wrong” kind of books to read would have got wee Clare cheering (she was a weirdly alienating thing herself). But part of the joy of my blog is exploration and, over the past three years, I’ve discovered wonderful pieces of nonfiction that I even hold close to my heart. I have learned to love nonfiction! But I cannot love Beloved Sisters and Loving Friends, and I’ll be honest; I feel a bit bad about that.

In class, we often talk about how women’s documents were often passed over because they were so filled with minutiae. Of particular note was the diary of Martha Ballard, a colonial midwife in New England, whose diary was passed over for its repetition. But Laurel Thatcher Ulrich (she of “Well-behaved women rarely make history” fame) spent eight years with the text and produced A Midwife’s Tale, which won a whole slew of awards, including a Pulitzer. Such minutiae, women’s historians argue, is the stuff of women’s lives, and should be treated with respect. This, I absolutely agree with. I am, after all, the woman who will put herself between problematic attitudes and Twilight, for Pete’s sake. I’m all about the respect. But I just could not engage with Beloved Sisters and Loving Friends for that very reason—the minutiae, the repetition. I couldn’t get into the world of Rebecca and Addie, because I couldn’t find a narrative thread to hang my hat on. The best nonfiction, I feel, has some kind of a narrative thread, and one would think that a historical narrative would get off scot-free, since it’s the story of a life.

The main problem is that, despite appearances (I mean, the cover doesn’t promise it, but I feel that a reader might expect it), this book does not collect the correspondence of Addie Brown and Rebecca Primus. Rather, it’s a collection of Addie’s letters to Rebecca and Rebecca’s letters to her families, so there’s no real dialogue between the two women. And that’s a shame, because Addie and Rebecca’s relationship is quite complex—Addie clearly loves and adores Rebecca (she happily reports a friend of theirs saying that if one of them were a man, they’d be married, as well as mildly erotic dreams about Rebecca), even as she contemplates marrying a man for economic security. But without Rebecca’s responses, it’s hard to gauge the relationship. While Griffin hopes she may one day find Rebecca’s letters, I like to think that Rebecca asked Addie to destroy them, because they were so emotionally honest. As lovely as that thought is, it does nothing to redeem the repetition and poor framing. I really wish I could heartily recommend this, and if you’re willing to brave Addie’s idiosyncratic grammar and spelling (because the bulk of the book is composed of Addie’s letters) to glean a few details, then more power to you. But this is not a good example of good historical writing.

Bottom line: Don’t let yourself think this is the collected correspondence of Addie Brown and Rebecca Primus—it’s Addie’s letters to Rebecca and Rebecca’s letters to her family, depriving us of any narrative thread. The framing is pretty poor, too. Pass.

I bought this book used on Amazon.