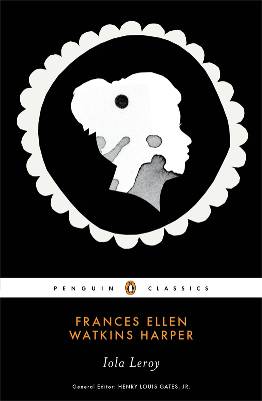 Despite how atrociously busy I am this semester, I am really enjoying my classes. Latin is a joy, I’m writing my senior thesis this month so I don’t have class (but I do have a twenty to twenty-five paper to write!), and my African-American novel class is just so interesting. I think I’m especially enjoying it because the approach is slightly but significantly different from my usual literature classes, and there’s much more historical context than usual, for obvious reasons. In any case, this brings us to Iola Leroy, the second installment on this class’ reading list.

Iola Leroy (or Shadows Uplifted) is set during the end of and after the Civil War. Iola Leroy is a beautiful slave who can pass for white—in fact, Iola had no idea she wasn’t white until, after the death of her slave-holding father, her parents’ marriage was declared illegal and she was sold into slavery. Rescued by the Union Army, Iola sets out to bring her remaining family—her mother, brother, and unknown uncle—together after the end of the Civil War. Along the way, she struggles to improve the conditions of freed slaves and people of color in the United States, refusing to abandon the people she so lately found.

Such a summary makes Iola Leroy sound much more focused than it actually is. Iola herself isn’t introduced until a little ways into the novel, which opens on a nearby plantation where the slaves (including the well-educated Robert, who becomes important later) are shown covertly supporting the Union cause. She is rescued at the behest of Tom, a slave fond of her who, of course, dies heroically so she can tend to him in his last hours. Like Clotel, Iola Leroy is didactic; Harper has a very specific point to make about systems of racism and sexism. Unlike Clotel, which uses melodrama to piece together a plot to hang Brown’s point upon, Iola Leroy uses the model of the sentimental novel—by which I mean a novel focused on the romantic trials of its heroine—in order to give her narrative a spine. While it’s got more story to it, there’s still the kinds of implausible coincidences that distance the reader from the novel’s reality, such as parents and children happening to discover each other on the battlefield.

However, Harper doesn’t merely copy or nod to these conventions—she uses them to make her point. Of particular import is the love triangle Iola finds herself involved in. Soon after she’s introduced, a white Union doctor named Dr. Gresham takes a shine to her and proposes to her, on the condition that she come back North and live as a white woman. (The narrative then takes the opportunity to leap back and deliver all of Iola’s backstory; it flows, as her mother’s story is a cautionary tale for her, but it’s still a little jarring.) Unlike the passive, perfect angels found in Clotel, Iola absolutely refuses to abandon her so newly found race, and chastises Gresham for it. When he protests that he, individually, did not cause her and her people harm (in fact, his mother is a Quaker preacher), Iola asks him why he didn’t resist it before the war broke out. Iola is very politically involved and politically aware; Gresham’s interest in her is a way for Harper to explore the political implications (it’s pondered at one point if Gresham isn’t romanticizing her past as a slave in his attraction to her) of such a thing and give Iola a sounding board for her own political views. This happens late in the novel as well, when a few friends of Iola visit an ex-slaveholder who still supports the system on a social visit.

Of course, Iola is not perfect—well, she is, but that’s the problem. Despite her vocal politics and her feminist leanings (even as she draws close to matrimony, she insists on maintaining a job for her self-respect), she is still the beautiful near-white black heroine prevalent in tragic mulatto narratives, even if she gets the happy ending promised to her as a sentimental heroine. For every novel in the class, we read an article of criticism (as well as view some film clips: Band of Angels and Pinky were chosen to accompany this novel), and the article for Iola Leroy focused on this. While there are some positive uses for the near-white black heroine in such literature, such as appealing to the doubled audience of white female abolitionists and a growing black readership, we’re still left with the same question: what does it say about black heroines who are actually dark?

I downloaded this free digital book from the Kindle Store.

One thought on “Review: Iola Leroy”