The Dark Knight Rises
based on characters by Bob Kane 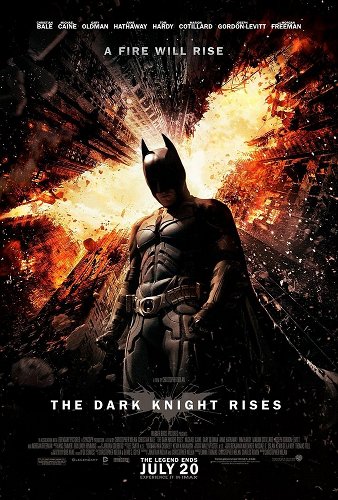 I wasn’t going to see The Dark Knight Rises. It’s hard to articulate why—I mean, I did thoroughly enjoy The Dark Knight, despite the fifth grader behind me who couldn’t comprehend nervous laughter—but I think some of it has to do with the fact that Nolan is burning through a lot of my goodwill towards him by producing Man of Steel. (This is Clark Kent. He’s not the grittiest dude.) In any case, I inadvertently absorbed some spoilers due to not being on my guard. But eventually my curiosity and love for eating nachos at the movies (I go to the best movie theater ever) got the better of me.

The Dark Knight Rises picks up eight years after The Dark Knight. Gotham has experienced an unprecedentedly low crime rate between the films, but it’s a peace predicated on the lie that Harvey Dent was murdered by the Batman, a lie that weighs heavily upon the shoulders of the police commissioner, Jim Gordon. After the death of his lover and the spectacular failure of a clean energy project, Bruce Wayne has become a recluse. But the rise of a new, terrifying threat to Gotham, the masked madman and semi-religious figure Bane, forces Bruce to pick up the cowl again. He’s not alone in the fight to save Gotham, however, and his allies number Jim Gordon, the hotheaded cop John Blake, and the ambiguous cat burglar Selina Kyle. But the bigger question is: is Gotham worth saving?

Walking out of the theater (“Are you okay?” my friend Isobel asked me; “Yeah, fine, just freaked out for the last fifteen minutes”, I replied), I realized something about Nolan’s Batman films. (To be fair, I haven’t seen Batman Begins or The Dark Knight since they came out.) They’re not really about Batman. There’s a point in The Dark Knight Rises where Batman drops out of the picture for a significant period of time. He has a good reason, of course, but watching it, I didn’t miss him, nor did those scenes feel like they could come from anything other than a Nolan Batman film. Instead, they’re about Gotham the city—the structures that can become shackles, as John Blake states late in the film. But this trilogy is an inherently conservative one, as these systems can redeem themselves when push comes to shove, as they’re not inherently corrupt, merely ripe for corruption. Good systems require good people, which is why this film posits that Batman is a people’s hero, even as Bane argues that he is working to put power in the hands of the people. And, at the end, anyone can be a Batman; not just the specific idea of inheriting the mantle, but also the concept that even the smallest acts of kindness are equal to Batman’s herculean feats of heroism. It’s an incredibly thematically dense piece of art, especially in the context of the other two films. I’ve long suspected that Heath Ledger’s untimely death forced Nolan’s hand in his grand plan for the trilogy, but the production has recovered beyond my wildest dreams.

My biggest concern coming to The Dark Knight Rises was Selina Kyle. Nolan isn’t known for writing the best female characters, and I personally have a very specific idea of Selina—namely, Adam Hughes’ Audrey Hepburn-inspired Selina. Anna Hathaway’s Selina is lovely, cutting, and capable, trying to keep her head above water as Gotham drowns. She’s much better than I expected, and Hathaway does extremely well, but she lacks Selina’s compact grace. This is the writing, not Hathaway; I struggle to imagine an honestly smiling Selina in Nolan’s characterization of her. The biggest addition (on the side of good) is Joseph Gordon-Levitt as John Blake, who takes up quite a bit of screentime, in keeping with the idea that anyone can be a hero, not just a billionaire with a lot of issues. He’s slim-hipped, principled, and incredibly focused; he’s also quite good paired with Jim Gordon, who takes to him as a sort of protegee, so he’s an engaging part of the world story. Tom Hardy’s Bane is terrifying in his purity of motive, and his story, once revealed, is heartbreaking, especially in how it intertwines him with another character, but I won’t say anything further for fear of spoilers. To be fair, the voice can be a little goofy; Isobel and I turned to each other and mouthed “OF COURSE!” to make each other laugh in the screening. The returning cast is as good as ever, and I will admit to Michael Caine’s Alfred making me cry. (But then, I cried at The Hobbit trailer beforehand, so that’s not really an accomplishment.)

Technically, The Dark Knight Rises is quite impeccable—for a movie that’s nearly three hours, I only noticed the length in terms of the sheer amount of story I was getting. And the tension is harrowing; despite the spoilers and despite my fairly cool enthusiasm for the series, I was gasping and inching to the edge of my seat constantly. There’s everything you come to expect from Nolan, including his stunningly imaginative action sequences, one of which opens the film and introduces Bane, and the cinematography is crisp, to better contrast the realism of Nolan’s Gotham. Hans Zimmer’s score is percussive, chilling, and haunting, flowing nicely from the rest of the films. I won’t say anything else, because you deserve to see this unspoiled, but the ending shot is one of my very favorites.

Bottom line: The fantastic conclusion to Nolan’s Batman trilogy is a thematically dense piece of art that focuses on the systems that make up our society and the people that can make up those systems—people who can be heroes. Very well done.