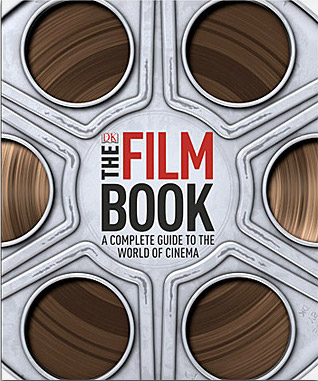 Have I mentioned my summer project yet? I like having summer projects; I don’t do well with free, unstructured time (even weekends make me feel weird when I can’t stay up late to watch Saturday Night Live). Last summer, it was making my Eowyn costume, and this summer, it’s my cinematic education. I was raised in what amounted to a cultural vacuum, hence my irrational love for the eighties, since it was the first cohesive clump of pop culture that reached me. This means that I have never seen The Wizard of Oz (a state I think I’m going to preserve, simply because I can), so I’ve decided to take it upon myself to catch up on film. It’s only a century, right?

The Film Book gives an overview of the history of film before moving onto exploring the production process of films, the various different film genres, and world film. There’s also profiles of the top one hundred directors (as determined by DK, of course) and profiles of the top one hundred films, along with lots of recommended watching lists for each decade, genre, and director.

With very little exception, the books I read come from my reading list. I might pick up another book by an author on my list or rent a book that’s not technically on the list yet, but I haven’t strayed from it in a long time. (A long time. Yes, the summer of my cinematic education is giving me more quotes to abuse.) But for some reason, when I rented this, I marched straight back to the late seven hundreds on the nonfiction floor at my library and grabbed the first two overviews of film I could find—this and James Monaco’s How to Read a Film. (Most of the stuff in my college library is too technical for my current level, although I’ve tried.) I was also looking for a good overview on the history of rock music, but couldn’t find one browsing; recommendations, anyone? In any case, it was kind of nice to pluck a book randomly off the shelf and learn from it.

Books like these are hard to review, hence the above anecdote, but I feel like The Film Book was a useful overview for me—not a total beginner, as I’ve taken a basic Introduction to Film class, but still very much at the beginning. Film history doesn’t particularly interest me, to be honest, so to have a digestible summary that not only covered technical advances but also trends in filmmaking was nice. Like most DK books (the very first book I ever loved was a DK book on mythology! Go DK!), there’s a smattering of sidebars and a glossary if you need it, but they aren’t distracting. This is meant to be aimed at young adults and adults so, while the book itself is glossy, gorgeous, and heavy, it’s aimed at getting information across more than anything else.

I also appreciated the top one hundred film list—I’ve started collecting those in a spreadsheet, for future reference; I like seeing what does and doesn’t make it onto multiple lists—and the section on world film is also much appreciated. It goes country by country, with more words devoted to countries with more influence in the world of film, like France and England. But the film recommendations aren’t limited to the top one hundred film list in the back; obviously, films are discussed throughout the text (some only to illustrate, to my dismay), and I got a great many recommendations for my Movies to Watch list. (Your to-be-viewed list? How is this usually done?) Each decade gets a timeline of interesting facts to orient you, although I did frown upon at the nineties and the aughts being conflated into one double decade.

I mean, ultimately, there’s not much to review here—I just wanted to record it as part of the reading for my summer of cinematic education (it’ll become a title, but not yet) before I get to any of the other texts I’ve found or have had recommended to me by my cinephile friend Natalya. It’s a decent, good overview with enough film recommendations to keep you going on your own.

Bottom line: The Film Book is a decent, good overview of film history, the process of creating a film, and world film, with enough recommendations to keep you going on your own.

3 thoughts on “Review: The Film Book”