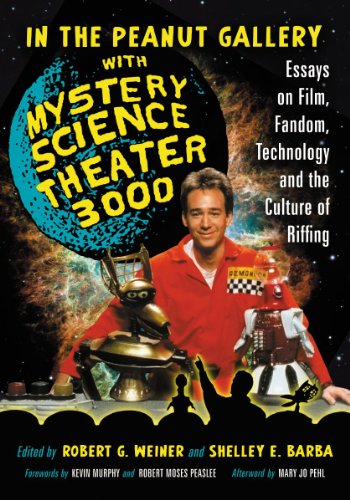 So there I am at Dragon*Con, wandering the dealer’s room, vacillating between my usual cheapness and a desire to buy everything. (Cheapness and a limited amount of things I can physically abscond with keeps me down.) And then I wander across McFarlane’s table, stacked high with academic books about popular culture, which boasts a copy of In the Peanut Gallery with Mystery Science Theater 3000, which I’d heard about via the magnificent Cleolinda Jones, who knows one of the contributors. While I try not to buy books sight unseen, especially at con, I already knew I’d never find it anywhere else, and home (or into the totebag) it went.

In the Peanut Gallery with Mystery Science Theater 3000 is the first book of any length that takes an academic approach to the now-venerable puppet show, where one man and several robots survive a horrible experiment to find the worst movie ever made by mocking it mercilessly. The show spanned ten seasons, two hosts (there’s even an essay about the supposed flamewar that erupted about the virtues of each host), and too many schlocky movies to contain. Along with several academic essays, there are also a handful of pieces contributed by the creative team behind the show, including Kevin Murphy, Mary Jo Pehl, and an interview with Joel Hodgson himself.

The nearest thing to this collection that I’ve read so far is Mapping the World of Harry Potter, which is no surprise; both Ben Bella and McFarland specialize in academic and/or analytical collections concerning pop culture, which I am absolutely all for. And that’s not just because I’m a fan, but because I think that pop culture can be a great way to illustrate more esoteric concepts to a layperson. For instance, Lacan’s concept of “suture” is explained vividly here in one of the better essays for precisely this reason. Of course, I think pop culture is worthy of examination outside of merely being examples, but it certainly helps. The book is also a bit padded; it squeezes past two hundred and fifty pages with two forewords, an afterword, and two essays that are essentially composed of interviews, which makes Weiner and Barbra’s claim that this is the first full-length work concerning Mystery Science Theater 3000 seem a little shaky, if technically very true.

Like most collections, it can be uneven; some essays are startlingly short and one has enough typos for me to notice. But for the most part, the authors approach Mystery Science Theater 3000 seriously, with enough levity that you never feel that they’re disobeying the theme song’s imperative to “remember that it’s just a show, and you should really just relax”. A handful of essays, including “Hamlet will return in Thunderball” (most of the titles are quotes from the show), examine the show’s historical context, from the reasons Roger Corman operates the way he does (Corman’s films featured in ten different episodes) to riffing on film (such as Woody Allen’s debut What’s Up Tiger Lily?) to the ancient Greeks. Participatory culture is nothing new, be it as straightforward as an episode of RiffTrax or the fan activity that spawned hundreds of fan “MSTings”, where fans took the Satellite of Love’s approach and applied it to terrible fanfiction (which I devoured as a kid). In a way, Mystery Science Theater 3000, with its rapid-fire jokes and far-reaching cultural knowledge (several essays point out how the crew can swing from high-brow to low-brow jokes in seconds), simply codified a particular practice of participatory culture—the active audience.

The essays that deal with that concept are the best, especially when they talk about the implications of the active audience. One essay, “The Semiotics of Spaceflight on the Satellite of Love”, focuses on two episodes, focusing on Rocketship X-M and Space Travelers (a borked cut of the Oscar-winning Marooned), in order to show how riffing can, aside from making a bad film funny, subvert the intended meaning of the film. In the hands of Joel and the ‘bots, the darker sides of each film are revealed, with their military slants, sexism, and more. Riffing is an expression of critical thinking, and this is what the academic essays in this collection are trying for, with varying results.

But I think my favorite essay (aside from “Double Poaching and Subversive Riffing”, which dissects riffing and its potential) might be “MSTies and Mastery”, which focuses on the fandom’s efforts to collect the entire series, complicated by the show’s early encouragement to circulate the tapes and limited official releases, due to rights for the films being riffed. It’s fairly straight forward, but ends by wondering if MSTie identity, so tied up in collection back in the day, will change now, because you no longer have to go to great lengths or even interact with another fan to procure them. If the effort of gaining something is a mark of how much you love it, what it does mean that you can just pirate the entire series in a single go now? It’s a fascinating question, and one I’m quite glad the book left me with.

Bottom line: Like most collections, In the Peanut Gallery with Mystery Science Theater 3000 is uneven, but it’s a decent, if padded, collection of essays that focus on the power of riffing and the evolution of fan communities. If you’d like.

I purchased this book from a vendor.

One thought on “Review: In the Peanut Gallery with Mystery Science Theater 3000”