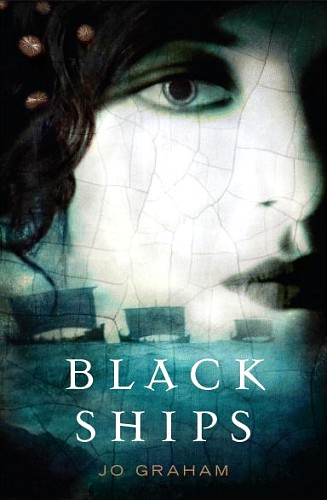 After I read Ursula K. Le Guin’s Lavinia last October, Fyrefly at Fyrefly’s Book Blog recommended I check out Black Ships, another book that retells The Aeneid from a minor female character’s perspective, to combat my complaints about Lavinia’s structure and pacing. While I’ve always been a fan of ancient Greece (although a greater fan of ancient Egypt), ancient Rome always struck me as a poor sequel as a kid, so I’ve not actually read The Aeneid, but I should really get around to it if I’m going to keep reading books like this. (Although I’ve never read The Wizard of Oz and that hasn’t stopped me one whit…)

Black Ships is the story of Gull, born to a Trojan slave brought to Greece as war prizes. When childhood accident leaves Gull with a twisted leg, her mother puts her in the care of Pythia, oracle and handmaiden to the Lady of the Dead. Gull finds comfort, peace, and agency there, eventually ascending to the role of Pythia herself—but upon her ascension, nine black ships she’s prophesied appear, bearing the Trojan prince Aeneas, determined to collect the remnants of his people and begin anew. Moved by her heritage and the goddess, Gull joins them, on a desperate quest to find light in an age that’s rapidly dying.

The entire time I read this, Lavinia was haunting my footsteps. Lavinia was enjoyable, if a bit of a disappointment, and Black Ships seemed primed to follow in its exact footsteps. In fact, I felt odd when Lavinia showed up towards the end in a way that totally negates the Lavinia of Lavinia (…LAVINIA!), as it meant the two couldn’t perfectly live as a pair in my brain. In any case, they’re still conjoined twins for me. They even both have compressed endings dealing with the family lives of its female protagonists! This isn’t a bad thing—if the publishing world was suddenly flooded with thoughtful and historically accurate fanfic about minor female characters in “classics” (y’all know how I feel about that word), I would be over the moon. Having a pair of books that look at the same book from different angles is the very joy of fanfiction and literary criticism.

Ultimately, though, I do like Black Ships better, although it didn’t blow me away. Gull’s identity as a priestess and oracle is something I found utterly fascinating, especially when Pythia the Elder passes away and passes her title on. Gull is a priestess, even if she breaks her vows (hmm, I’m suddenly flashing to Joscelin from Kushiel’s Dart, a book Graham cites as a favorite in the extras at the back of the book) in service of the greater good. As a child, she understands that being a priestess of death is to be apart from the world, but her journey in this novel is discovering that life and death are intrinsically linked. (My favorite side character, Hry, an Egyptian priest and scholar, corrects Gull when she thinks of things as opposites; instead, they are actually inverses.) And her life is rough. She’s a woman apart trying to reconnect with a culture she only knew from her mother and the other slaves, as well as trying to seek out the hand of the goddess to help her people. One of her subplots could have easily gone the route of “she just needs a good man!”, but it’s clear that Xandros, a sailor whom she falls for, clearly loves Aeneas more than he does her. (There’s some awkwardness with the pronouns of what appears to be a transwoman priestess he’s briefly involved with, but I’m glad that this angle was at least explored.)

I do feel like I wasn’t as invested at the beginning, but I’m pretty sure that’s a symptom of reading the first one hundred pages in fits and spurts over the beginning of midterms. And, at the end, it falls prey to the same thing as Lavinia; the bulk of the novel is timely, but the ending is compressed and a bit jerky. One of the things that Graham does very well here is depicting an almost dystopian world on the cusp of the Dark Ages, but I thought the ending, which made sure to show everyone’s children, undercut the bittersweet nature of Latinum as a light against the coming darkness. However, I did love Graham’s brief foray into Egypt, which captured a lot about what I love about ancient Egypt and showed me some new sides to that. Luckily, her next novel, Hand of Isis, seems to be mostly set in Egypt…

Bottom line: Black Ships is an enjoyable and thoughtful rewriting of The Aeneid from the perspective of a Trojan priestess, although the ending is a bit compressed and jerky. Very nice.