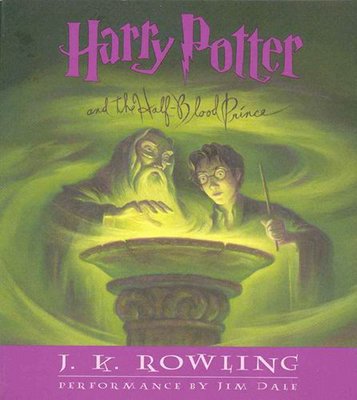 I got a very odd feeling two-thirds of the way into Harry Potter and the Half-Blood Prince. It wasn’t just the fact that this is the second time I’ve read (listened? This terminology always trips me up) this book; it was the fact that I can never read these books in the same way I did as a child and a teenager. I was a very different person when I was a child than I am now, and I was also a very different reader, so it’s hard to try and gather back up my initial impressions—but I still try to, and it’s that attempt that’s disorienting. I really hope that made sense. In any case, Harry Potter and the Half-Blood Prince.

In Harry Potter and the Half-Blood Prince, war has come to the wizarding world. The Ministry of Magic, now headed by ex-Auror Rufus Scrimgeour, is publicly at odds with Lord Voldemort and the Death Eaters. Wizards and witches take every precaution to protect themselves, but they still open the paper every day to check the casualty list. And yet, life goes on at Hogwarts. Even as Dumbledore and Harry work towards taking Voldemort down, there’s classes, Quidditch, and, of course, girls. Girls like Ginny Weasley…

I have to say, Harry Potter and the Half-Blood Prince reminds me strongly of its sister book, Harry Potter and the Chamber of Secrets. (The fact there are seven Weasley siblings and seven books tempts me to take the filial comparison further, but I’ll restrain myself.) It’s the horror angle, which has been fascinating me during this… particular… visitation. (Ha! Take that, terminology!) In Harry Potter and the Chamber of Secrets, there’s a vein of chilling horror in an otherwise pink-cheeked and schoolgirlish story, which makes that horror even more affecting. Harry Potter and the Half-Blood Prince does the same by distributing another vein of chilling horror in what could, in certain lights, be mistaken for a teen comedy. Even as the kids play Quidditch, study, and, of course, fall in love, they anxiously read the papers for news of deaths and imprisonments. Even as Ron humorously pines over a girl thanks to a love potion, the tone turns very dark as Ron ends up poisoned. It’s not a happy book, by any means, but it uses the same approach, even if the series has matured since then.

In fact, the series has matured enough to mock itself—darkly, not humorously, of course. While Harry fully expects Horace Slughorn, the teacher he recruits with Dumbledore at the beginning of the book, to take the position of Defense Against the Dark Arts teacher, he takes, instead, the position of Potion Master. And the most heart-wrenching mockery of all is when Hermione, after everything happens, quietly solves the mystery of the title and Harry feels absolutely nothing but grim resignation. In a way, Harry Potter and the Half-Blood Prince is Harry’s last hurrah of normalcy before the ultimate showdown. It strips him down to his core, which Harry has always underestimated; always self-centered and isolated, he doesn’t realize that his greatest strength is his friends, even if his protectors have been struck down one by one. Ready or not, Harry is finally at a point where he is among equals, not betters—it’s no mistake that Dumbledore tells Harry at one point that he feels safe because he’s with Harry. He’s a man now.

…wow, that was morose. But that’s the point, really; it’s a dark book, even with the veneer of teenage lightness on top. The worldbuilding opens up vividly here, opening with one of my favorite chapters in the series, where the Muggle Prime Minister learns that a recent rash of accidents are anything but. We learn more about Snape and Lord Voldemort’s backgrounds. It’s incredibly odd to come back to Snape’s story knowing how it ultimately turns out, especially since I’m so frustrated with Snape as a character. (Draco fares better this time around, ending my frustrated cries of “DON’T YOU HAVE HOMEWORK?”) There are still some anemic points here and there in the worldbuilding, but it’s nothing I haven’t covered, although I am glad to see that even Rowling vacillates on the robes versus civvies debate raging only in my mind.

I’m very much looking forward to Harry Potter and the Deathly Hallows, even if it feels like my childhood is ending all over again. (If I had a dime for every time I said that…)

Bottom line: Harry Potter and the Half-Blood Prince is unrelentingly dark, reminding me of nothing so much as its sister book, Harry Potter and the Chamber of Secrets—it has a vein of chilling horror shining through a dark teen comedy, as Harry is stripped down to the core of his being, a being that includes his friends as much as himself. A solid installment.

4 thoughts on “Reading by Ear: Harry Potter and the Half-Blood Prince”