As much as I find myself not caring for those who don’t care for speculative fiction, respect must be given to those who are trying to negotiate their way towards a wholehearted embrace of the genre. And as academia and other institutions who were once resistant to the stuff open the doors, we end up with a lot of scholarly writing on speculative fiction and (of course!) on the fandom that grew from it.

In Other Worlds by Margaret Atwood 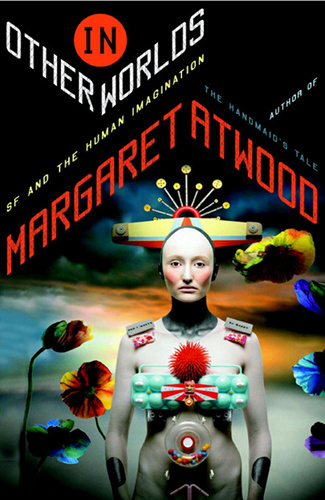 At a time when speculative fiction seems less and less far-fetched, Margaret Atwood lends her distinctive voice and singular point of view to the genre in a series of essays that brilliantly illuminates the essential truths about the modern world. This is an exploration of her relationship with the literary form we have come to know as “science fiction,” a relationship that has been lifelong, stretching from her days as a child reader in the 1940s, through her time as a graduate student at Harvard, where she worked on the Victorian ancestor of the form, and continuing as a writer and reviewer.  This book brings together her three heretofore unpublished Ellmann Lectures from 2010: “Flying Rabbits,” which begins with Atwood’s early  rabbit superhero creations, and goes on to speculate about masks, capes, weakling alter egos, and Things with Wings; “Burning Bushes,” which follows her into Victorian otherlands and beyond; and “Dire Cartographies,” which investigates Utopias and Dystopias.  In Other Worlds also includes some of Atwood’s key reviews and thoughts about the form. Among those writers discussed are Marge Piercy, Rider Haggard, Ursula Le Guin, Ishiguro, Bryher, Huxley, and Jonathan Swift. She elucidates the differences (as she sees them) between “science fiction” proper, and “speculative fiction,” as well as between “sword and sorcery/fantasy” and “slipstream fiction.” For all readers who have loved The Handmaid’s Tale, Oryx and Crake, and The Year of the Flood, In Other Worlds is a must.

In 2010, Margaret Atwood came to Emory to deliver the Ellman lectures from which this collection grew out of—I managed to attend the first of her lectures. Atwood’s history with speculative fiction is a bit tortured; check out that last post for links to her discussion with Ursula K. LeGuin about whether or not what she writes is actually speculative fiction. But it seems the woman is coming around, and for that, I am supremely grateful.

Memory at Stella Matutina enjoyed it, although she points out it appears to be written for fans of “literary fiction” (FIRE!) and Atwood seems to have not read much contemporary speculative fiction; Stefanie at So Many Books found it disappointing, as it covers a lot of ground Atwood’s already covered in other essay collections.

As If by Michael Saler

Many people throughout the world “inhabit” imaginary worlds communally and persistently, parsing Harry Potter and exploring online universes. These activities might seem irresponsibly escapist, but history tells another story. Beginning in the late nineteenth century, when Sherlock Holmes became the world’s first “virtual reality” character, readers began to colonize imaginary worlds, debating serious issues and viewing reality in provisional, “as if” terms rather than through essentialist, “just so” perspectives. From Lovecraft’s Cthulhu Mythos and Tolkien’s Middle-earth to the World of Warcraft and Second Life, As If provides a cultural history that reveals how we can remain enchanted but not deluded in an age where fantasy and reality increasingly intertwine.

Cats, the subtitle is “Modern Enchantment and the Literary Prehistory of Virtual Reality”. I really think that’s all I need to say about it. Of course, since it’s a specialty academic text, I am really banking on Georgia academic libraries getting this text before the May of 2013.

Michael Dirda at The Washington Post enjoyed it, but thought that Saler could have covered a bit more virtual reality; Tom Shippey, writing for The Wall Street Journal, also enjoyed it.

6 thoughts on “The Literary Horizon: In Other Worlds, As If”