My dear and beloved readers, something momentous has occurred. While talking to my friend Andrea on Sunday, I felt strange. After all this time, I’m ready. I finally actively want to read mystery. Of course, my definition of mystery is a bit broader than most, given my long break from the genre…

The Thin Man by Dashiell Hammett 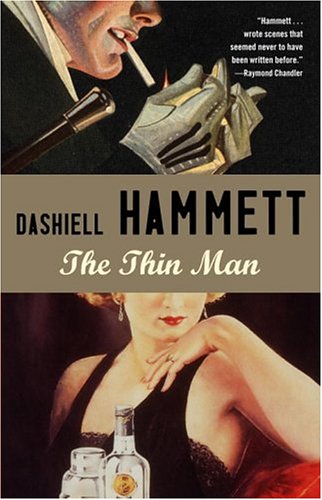 Nick and Nora Charles are Hammett’s most enchanting creations, a rich, glamorous couple who solve homicides in between wisecracks and martinis. At once knowing and unabashedly romantic, The Thin Man is a murder mystery that doubles as a sophisticated comedy of manners.

This is one of those initial Nancy Pearl recommendations, and for good reason—a cute couple with banter and murder? Perhaps this will fill the Mary Watson-shaped hole in my heart. (Doyle! …um, I’m shaking my fist at the sky. That really doesn’t play in writing, does it?)

Ela at Ela’s Book Blog enjoyed it, pointing out the rarefied atmosphere that reminded her of Christie, my childhood favorite; Cori at Let’s Eat Grandpa! enjoyed the banter, but expressed great concern for the cast’s livers.

The man he knew as “Control” is dead, and the young Turks who forced him out now run the Circus. But George Smiley isn’t quite ready for retirement-especially when a pretty, would-be defector surfaces with a shocking accusation: a Soviet mole has penetrated the highest level of British Intelligence. Relying only on his wits and a small, loyal cadre, Smiley recognizes the hand of Karla-his Moscow Centre nemesis-and sets a trap to catch the traitor.

…I want to read this for the exact reason you think. I want to watch the recent film adaptation. I was initially going to do my usual practice of starting way back at the beginning, but I threw caution to the wind. This is coming back to my college library on Wednesday, and woe betide the current renter if she is late.

Matthew at Bibliofreak.net enjoyed it, but felt the complexity of the story makes the reader lose the thread too often, but Joe Sherry at Adventures in Reading didn’t care for it. Bring it on.

Tinker, Tailor, Soldier, Spy was published in June of 1974.