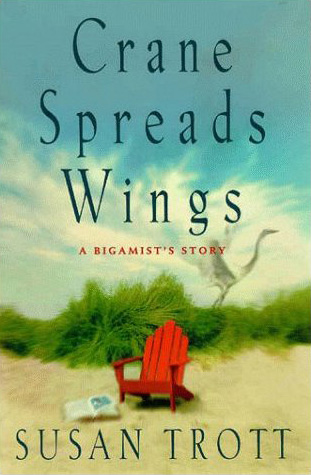 As I’ve mentioned (as part of my book blogger origin story, coming to a comic book store near you soon), at least the first hundred or so book recommendations I wrote down came from Nancy Pearl’s book recommendation… well… books, Book Lust and More Book Lust. So far, she’s not steered me too wrong—I enjoyed All is Vanity and Lady into Fox, although I didn’t care for Beauty or Mirror, Mirror. But they were never boring. So after reading a lot of speculative fiction, I thought it was time to cleanse the palette with some light contemporary fiction. But when I said light, I didn’t mean insubstantial.

Crane Spreads Wings is the story of Jane Croy—or is that Effie Crackalbee? A month into her marriage with Alan Croy, Jane abandons Alan and soon finds herself nannying for the kindly Gled, taking care of his son. But Gled lives in the same place in Massachuetts that Alan does, which wouldn’t be a problem if Effie hadn’t failed to mention that she was married to Alan. As Effie finds herself in the middle of a love triangle, her life is about to get much more complicated…

Normally, when a book has been bad or even offensive, I try to start out with the positive. After all, I’m an optimist who believes that there’s some good in everyone and in every book. So here’s what was good about Crane Spreads Wings—it was short. It barely topping two hundred pages. In a way, it reminded me of your average Lifetime Original Movie, but those are more entertaining. This novel committed what I feel is a cardinal sin in fiction. It was boring.

I picked up Crane Spreads Wings because I was expecting something in the line of an unreliable narrator. But Effie is incredibly bland. Instead of developing the character (in fact, Effie undergoes no character development), Trott instead rattles off details in a rather excessive example of telling and never showing. Effie practices T’ai Chi, the gimmick that names the chapters, but she never seems truly invested in the philosophy of it. It’s just something cool that she does (Gled teases her about licensing her fists as a weapon), rather than something that’s fundamentally a part of her. And nothing ever affects her. Even as Gled almost psychotically mourns the loss of a family member or she almost gives birth in an outhouse, the narrative voice is calm and bland. Trott tells us these things are happening, but we’re never shown them. At one point, we are told that Effie has doubled in size after pregnancy, but we’ve never shown Effie getting used to her new body, or even thinking about her body image at all, although she was quick enough to point out her small frame and beautiful features earlier. Things happen around Effie; they never happen to her. There was absolutely nothing going on below the surface.

On top of that, the dialogue is not very organic. Here, Trott is fond of using phone conversations to depict scenes between characters, but they always open with something like “Don’t you remember what your mother sounds like?” or something equally frustrating. My notes say, in different places, “No organic dialogue”, “Characters are people, too”, and “People act like this?”. It mean, it goes beyond the dialogue into the characterization. We’re told characters are sad or mad or murderous, but it’s never allowed to stand for itself. It’s spooky.

The depiction of women in here is just… weird. There’s not a single female friendship in here that’s not catty. Janice, Gled’s sister, is the token bitch for no reason and Effie looks down on her sisters as dumb. (We’re told they’re dumb, but they are depicted more as naive than anything else.) And the romances are odd. There’s no falling in love; Gled immediately is smitten with Effie, so there’s no hope of development there. The bigamy on the front cover turns out to be nothing more than a speed bump. Effie never feels guilty or wonders why she’s doing it, and I think the book wants us to pin that on Effie’s mom, who works for a law firm and has had tons of affairs with lawyers. (Which Effie occasionally looks down at her for. Of course.) To the novel’s credit, Effie ends the novel a singleton, which is refreshing, but we know who she’ll get together with as she sets out on her new life in an occupation we had no earthly idea she was interested in. Yurgh.

Bottom line: Crane Spreads Wing commits the cardinal sin of fiction—it’s boring. The characters are bland and static, the dialogue is wooden, and the gender politics are just weird. Avoid.