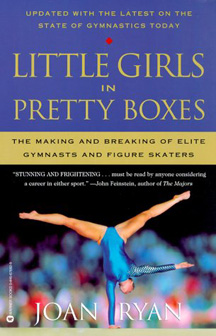 Everything I know about sports (and figure skating in particular) I learned from Johnny Weir. Let’s face it; I was a bookish and spiteful child, of course I hated sports with a passion as a kid. So my first forays into actually appreciating sport (beyond my own appreciation for physical fitness, which is much different) was discovering who Johnny Weir was and investigating men’s figure skating in late high school and early college. But that really has nothing to do with today’s title; an editor at Autostraddle mentioned reading it on a plane ride and enjoying it, so I added it to the list. (I feel like I’ve been bringing the boring recommendation stories lately. Let’s hope this changes soon.)

Pretty Girls in Little Boxes looks at the world of elite gymnasts and figure skaters and comes away absolutely horrified. After extensive interviews of those involved in the field, San Francisco Chronicle writer Joan Ryan presents stories of emotional abuse, eating disorders, and stunted growth, encouraged by coaches and parents to take part in a costly system whose chances of success—winning an Olympic medal—are slim at best. As the broken bones and, yes, bodies pile up, Ryan asks—what are we doing to our girls?

First things first—Pretty Girls in Little Boxes is sensationalistic. Ryan paints a picture of a grim machine that takes in bright-eyed, hopeful little girls and, quite literally, breaks them until they either leave or die. This might be cynical, but I was honestly surprised that she covered sexual abuse discreetly in two pages, given the amount of rubbernecking that’s going on here. And, to be brutally honest, that’s why I picked up the book; I wanted to be horrified. Ryan understands her audience completely, devoting barely a page and a half to advocating specific regulations and changes. This is not a nuanced portrait of figure skating in the 1990s; success stories are brought up under duress or glossed over, such as Brian Boitano and his extremely kind coach. But then again, Boitano is male, and Ryan argues that being a female skater or gymnast in this (well, that, it’s a sixteen year old book that hasn’t aged too well) environment is deadly.

This is not a feminist critique of the sport, which I would have loved—while Ryan looks at the situation through that lens a few times, most of the book is spent depicting the life stories of girls, women, and families who have suffered in this system. But it’s this angle I’m absolutely fascinated by. Female gymnasts, more so than figure skaters, are asked to maintain the body of a child during adolescence; Ryan is particularly fond of the example of Kathy Johnson, who famously didn’t start menstruating until age twenty-five and, less famously but no less horrifying, grew an inch at age twenty-eight. It’s this infantalization that makes them attractive to an audience. If you’re a little girl (or look like one), then you can’t be physically powerful, let alone intellectually powerful. On top of that, you can’t have a sexual orientation, so there’s no threat that you have an aggressive sexuality or are—gasp—queer. There’s no greater symbol of this by coaches—often big men who train little girls because it’s lucrative rather than a specific understanding of them—pressuring their gymnasts to starve themselves to delay menarche and, therefore, the development of their adult (and therefore potentially powerful) bodies. Figure skating comes with its own attendant host of issues, of course; I was particularly taken by the rather vivid illustration of the madonna/whore complex when Ryan described one of Nancy Kerrigan’s costumes as “a white lace costume that suggested both First Communion and Victoria’s Secret” (132). But Ryan focuses on the gymnasts and so will the reader.

Pretty Girls in Little Boxes is quite readable; while I read it over the course of a few days, I can easily see someone whipping through it in a few hours. Each chapter is devoted to one problematic aspect of the sport—injuries or coaches. But there is a bit of a narrative thrust in the book, and that comes from Bela Karolyi, whom Ryan loathes and makes the reader loathe as well. A Romanian ex-pat and gymnastics coach, Karolyi (as presented here) is ruthless, forcing girls to perform on broken limbs, taking medication to mask pain, and emotionally abusing them everyday. His highly visible status as the man who brought East Bloc teaching methods to the US earns him Ryan’s ire, but there’s also a bevy of other coaches and, especially, parents who are equally culpable, looking the other way when coaches get out of hand and pressuring their daughters to justify the immense sacrifices, both personal and financial, raising a child in this environment incurs. As I mentioned above, I don’t think it’s aged well—for starters, I’m led to believe that it’s out-of-print, and gymnastic and figure skating fervor no longer grips the United States. (That I am aware of.) But, when taking it with a grain of salt, it’s a interesting look into a seriously messed up system, as well as the mid-nineties.

Bottom line: Joan Ryan’s sensationalistic Pretty Girls in Little Boxes is an interesting and horrifying look into a serious messed up system, as well as the mid-nineties. But take it with a grain of salt.