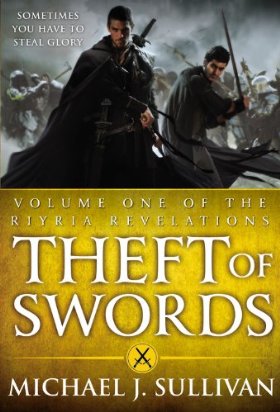 I’m typing up this review on Iona, my trusty iPhone, as there is currently an Internet blackout at my parents’ house. (Equally unrelated to the bulk of this review—when did I cross over from calling it “my house” to “my parents’ house”? Is it pretentious?) Thus, images will be added when possible. (ETA: Done!) I am absolutely pathetic without the Internet. If the zombies manage to take it out during the zombie apocalypse, I will be the first to dip myself in barbecue sauce and throw myself to the ravenous hordes. In any case, today’s book caught my eye on NetGalley because it looked like fun. The fact that a handful of reviews (this is an Orbit reissue of a mostly self-published series) described it as “bromantic” certainly didn’t hurt.

Theft of Swords collects the first two books in The Riyria Revelations series, The Crown Conspiracy and Avempartha. In a world of knights, kings, and a very powerful church, Royce Melborn, a sarcastic thief, and Hadrian Blackwater, a decent-hearted sellsword, are just trying to get by. Together, the two are known as “Riryia”, and they make their living carrying out not-so-legal errands for the aristocracy. When the two are hired to steal a sword to save a man’s life (Hadrian’s idea, Royce would like to point out), they find themselves framed for the murder of the king—and drawn into a plot that could change the future of mankind.

Theft of Swords‘ greatest strength is its characters. While the bromance between Royce and Hadrian I was promised never quite surfaced, they play well off of each other, they like each other, and they’re fun to be around. Royce is dour, sarcastic (“snarky” would imply joy), and clever; Hadrian is nice, competent with a sword, and has a weakness for doing the right thing. In The Crown Conspiracy, they get to hang out with Alric, the prince (and son of the king whose murder they’re framed for) and Myron, an adorably sheltered monk. He gets exited that horses come in different colors, guys, he’s precious. But as precious as he is, my favorite character is Esrahaddon, an an ancient wizard who comes in and out of Royce and Hadrian’s lives as he pursues saving the world. I was always excited to see him and what he was up to. Sullivan manages the neat trick of making him very powerful and very limited in that power; after all, as Esrahaddon says, “Magic is a little like playing the fiddle. It’s damn hard to do without hands” (301).

On his website and in an interview in the back of this Orbit edition, Sullivan talks about the light-handed approach of writing—”making the story pop off the page and the writing disappear” (472). For the most part, he succeeds. On one hand, it’s a fun and breezy read. I swept through the bulk of it yesterday without feeling I was rushing myself. On the other hand, it can be a bit jarring when he approaches darker material in this style, such as an oddly melodramatic moment when Alric reflects on his father’s murder in The Crown Conspiracy and the near-rape of a new female character in Avempartha. I want to commend Sullivan for doing exactly what he set out to do, but I also want to point out that beautiful style can be and has been done fantastically in, well, fantasy. Ah, I was wondering when I was going to get around to my usual plug for Jacqueline Carey. (The Sundering if you want to deconstruct The Lord of the Rings, Kushiel’s Dart for everyone else.) In any case, Sullivan isn’t denigrating the other approach—he mentions he has manuscripts written in that style—but clearly separates The Riyria Revelations from them.

In the same interview, Sullivan talks about trying to make his world holding accessible. For the most part, it’s a world that will be familiar to any fan of the genre—medieval England (give or take a Renaissance Festival), elves, dwarves, and wizards. But Sullivan also takes it in a more interesting direction with the addition of the Nyphron Church as a very powerful piece of the political puzzle. I’ve read fantasy works that use a powerful church before (When the King Comes Home leaps to mind), but Sullivan uses it in conjunction with fantastical races, which I haven’t seen. For instance, the enslavement of elves is promoted by the Church, which views them as abominations. But I think Sullivan misses the accessibility marker a little with the politics, which can be convoluted, especially the farther back you go. On top of that, there’s a handful of anachronisms that ring a little untrue; modern slang is used a bit too often for my taste, especially in a series that has so much fun mocking Esrahaddon’s dialect barrier.

Bottom line: Theft of Swords, which collects the first two novels in The Riyria Revelations, is a fun and breezy read with a great cast, although the style can hurt it in darker moments and there’s a touch of anachronism with the characters’ language. Worth a shot.

2 thoughts on “Review: Theft of Swords”