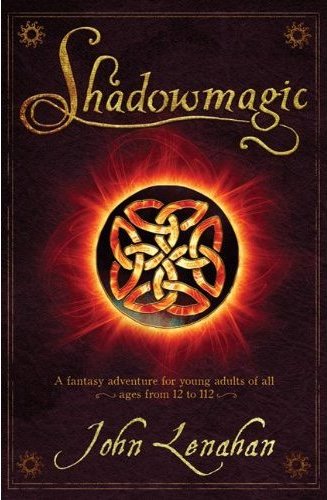 So there I am, in the Tor panel at Dragon*Con on the Friday night before Labor Day. Len is showing me a copy of Dreams of Steel II: Brass and Bolts, which contains his story “Dreams of Freedom”. (Yay, Len!) A gentleman comes up to us and hands us bookmarks for his book, Shadowmagic; I exclaim I’m a book blogger (…let’s be honest, I do that a lot, it’s kind of a big part of my identity) and he whips out a copy, signs it, and hands it to me. It turns out that John Lenahan originally published Shadowmagic as a free podcast, which was then published in the UK. He’s seeking American publication at the moment, which was why he was at Dragon*Con, although Tor editors don’t take submissions at conventions. I figured it’d be a cute and unchallenging read while I recovered from con. Little did I realize how unchallenging it would be…

Shadowmagic is the story of Conor O’Neil, an average Irish-American teenager—despite the fact his one-handed father has trained him in sword-fighting and ancient languages. But when Conor and his father are attacked by two horsemen who invade their house, they are whisked away to the Land, Tir Na Nog, where Conor’s father is a prince and Conor himself is wanted dead by pretty much everybody because of some dumb prophecy. Along the way to defeating his evil tyrant of an uncle Cialtie, Conor befriends a rag-tag team of himself, a banshee, an imp, and a princess. Can they get Conor back to the real world?

Oh, where to begin, where to begin. I suppose Conor is the first place to start, seeing how he’s the first and perhaps biggest problem. Have you ever seen Saved by the Bell, the early nineties high school sitcom? The protagonist is a one Zack Morris, a scheming wiseacre who spends some time breaking the fourth wall and winking furiously at the audience. Conor is like Zack—except without the charm, wit, or personality. He truly kept reminding me of bad Nickelodeon pilots in the nineties; he spends most of his time cracking unfunny jokes that he knows no one in Tir Na Nog will get, but he still makes them, which just makes him look like an ass to be honest. The other characters in the novel are potentially interesting, such as his parents—his mother is an immortal supernatural being and his father gave up his immortality to raise Conor in the Real World. What must their relationship be like? Of course, Conor doesn’t think about this all, merely cracking that he should probably go to his room when his parents have a tiff for the first time in front of him. Fergal, the banshee, is just the sort of snarky best friend I love in terrible fantasy movies, but it’s all about Conor. I’d go on, but you get the drift. He’s boring and unfunny.

What makes it even worse is that nothing is established or foreshadowed or even introduced properly. (Conor certainly isn’t, which is part of the reason it’s very difficult to like him. The fact he’s incapable of telling an actually funny joke is another part.) For instance, Conor and his father are rescued by his mother shortly after their arrival in Tir Na Nog, which stuns Conor, since he’s been told his mother is dead since he was a little boy. But when does Lenahan introduce this fact? Right after she rescues him, which removes any impact the event might have had. This is essentially how the whole novel goes, to a frustrating degree. Conversations that introduce important things—like, oh, the plan for storming the castle—are referenced on the spot as if Conor has really, really poor short-term memory or is just really, really bad at telling stories. Plot points are brought up as afterthought, which means that even when the novel tries to be serious, it’s incapable of impact. To be completely fair, there are a few spots where Lenahan tries; for instance, Conor has a charm on him that keeps family from murdering him (a very useful trick in Tir Na Nog), which is how he discovers that he and Fergal are distantly related. But for the vast majority of the novel, it feels improvised, and poorly at that. On top of that, a lot of these characters are just… dumb and sometimes inappropriate. Late in the novel, Fergal believes the villain about what happened to his parents—despite the fact that he magically saw the true events some time prior, making him a complete idiot for doing so. Also, Conor ogles his mom twice. And the second time he knows it’s his mom. Yeah. That happens.

To be fair, the worldbuilding has potential; the title, Shadowmagic, refers to a kind of magic that draws on tree sap rather than gold, the source for magic known as Truemagic. There’s also runes involved and lands that have affiliation with types of trees. Of course, it’s not explained very well, but it’s interesting! And I quite like the idea that the different types of magical creatures in Irish folklore are really just differing nationalities of folk in Tir Na Nog, as Conor points out at one point. So there’s that. But it’s buried under the weight of an aggressively unfunny main character, a complete lack of set-up for anything (which keeps it from having any impact), and some astounding stupidity on the part of the characters. Yeesh.

Bottom line: John Lenahan’s Shadowmagic is plagued by an aggressively unfunny main character, a complete lack of set-up for anything (which robs it of any impact), and some simply astonishing acts of stupidity by the main cast. Avoid.

I received a free copy for publicity purposes.