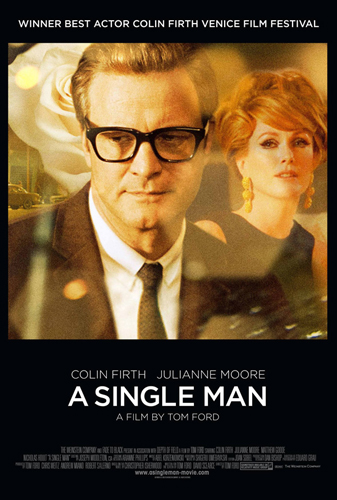 I had this DVD for about a month from Netflix. I’ve alternately been busy, planning to watch it with friends, and hemming and hawing over devoting a significant amount of time to a film that didn’t even qualify for Page to Screen. Obviously, I was wrong—feeling a little weepy one evening, I decided to devote that useless effort to watching a film and promptly discovered it was based on a book in the first few credit titles. I can only imagine how far my howls of irony sounded. In any case, I was both pleased and relieved that it was well worth the unintentional (I swear!) wait.

A Single Man, set in the early 1960s, follows an important day in the life of Professor George Carlyle Falconer—if he has his way, it will be his last day on earth. A year after the death of his long-term partner, Jim, every day is a difficult haze for George, and he’s determined to end it. But the day he finally returns to the real world to say goodbye to it, he discovers that there is still some beauty and hope left, even with the limitations society places on George’s life.

Colin Firth received an Oscar nomination for his role as George, and rightfully so. Without much dialogue (though, of course, George does speak), he manages to convey the sadness, the loneliness, and the fragile hope developing inside with a remarkably deftness. In an early scene, George is informed of Jim’s death by a kind cousin against the wishes of Jim’s parents (despite the fact the two have been together for sixteen years), and Firth just slays it—I started crying in sympathy as George tries to hold back his grief enough to finish the call and give himself over to it. I’ve heard A Single Man described as a stream of consciousness film from George’s perspective, which I find to be true—save for a few shots that linger on Julianne Moore’s character for no reason other than that they paid her and, by God, they were going to use her. (Incidentally, Moore’s Charley is well-done.) Matthew Goode’s Jim, who shows up in a handful of scenes, is warm and kind, and I was delighted to find Goode doing his best John Barrowman impression—seriously, their American accents are identical, right down to inflection. Nicholas Hoult (yes, that kid from About a Boy is all grown up) is absolutely radiant as Kenny, one of George’s students trying to pull him out of his shell and the one person George meets that just might turn things around. The supporting cast is solidly, but ultimately, this film is carried on the capable shoulders of Firth.

Fashion designer Tom Ford makes his film directorial debut here, and the film is gorgeous—although I must point that Arianne Philips, rather than Ford himself, designed the costumes. It combines a wonderful feel for the period with a universal feel; most of this, I think, comes from the score. A lot of period films set in more modern eras where we have access to the music of the period tend to, in my experience, mix a few period songs with a score that sounds, well, period; Catch Me If You Can comes to mind. But Abel Korzeniowski resists this impulse and opts for an understated score; it’s not a score I would listen to on its own, but in context, it’s impeccable. In its cinematography, A Single Man utilizes a trick that might seem obvious or gimmicky in lesser hands—George moves in a world almost drained of color, remembers Jim in full, beautiful color; when he’s inspired or finds a glimmer of hope, color appears, reminding him why life is worth living. But because this is a film told entirely through George’s viewpoint, it works beautifully. I’d be interested in watching this again after my Introduction to Film Studies class, to look at these things more in-depth.

While I can’t speak to how well Ford and David Searce adapt the novel to the screen, I heartily enjoyed the story—my favorite detail, however, had to be the little microaggressions George suffers in his daily life. Even when visiting his oldest and dearest friend, she ponders about what would have happened if she and George had had a “real” relationship; George’s subsequent fury and declaration that he and Jim had something realer than she’s ever had with her ex-husbands was beautiful. I do want to speak a little about the ending… but I don’t want to spoil you. At first glance, it may feel like it threatens to invalidate what came before, but upon further review, I find it heartwarming. It still serves the story and the character, although the cause is a bit arbitrary. Ultimately, however, it was a satisfying end to this complex story.

Bottom line: A Single Man is an absolutely gorgeous film carried on the capable shoulders of Colin Firth; his performance as George is so powerful and human that it utterly blew me away. Behold, a film that makes me enjoy stream of consciousness. Spectacular.

I rented this DVD from Netflix.