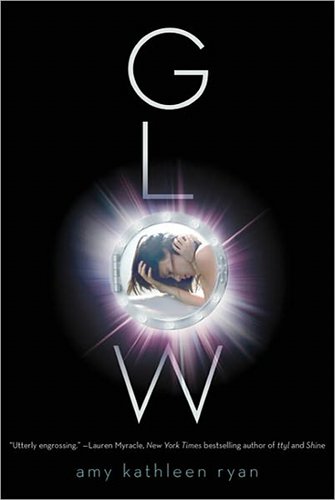 Back in April, Tor.com gave away a hundred advanced review copies of Glow to anyone who wanted one; I sent in for it and got a copy, which has languished on my shelf until now. While I know the giveaway was to encourage word of mouth before the release tomorrow, I usually read advanced review copies close to their date of release in order to put a review up the day before—I just don’t like posting advanced reviews really early. In any case, the release date snuck up on me, but I managed to spend my Saturday morning in bed reading it, which was absolutely delightful.

Glow takes place on two ships—the Empyrean and the New Horizon. It’s a familiar story; Earth is no longer livable, so ark ships capable of bearing life have been sent out to discover a new planet for Earth-origin life to settle. While human fertility is declining, the Empyrean has managed to produce children. Children like the sharp Waverly and earnest Kieran, who live on the secular Empyrean. The New Horizon, however, is full of adherents to a particular flavor of Christianity… and absolutely no children. When the New Horizon stages a raid on the Empyrean in their desperation for children, Waverly and Kieran are separated. As Waverly survives the assimiliationist horror of the New Horizon under the control of Pastor Anne Mather, Kieran struggles to inspire the now minuscule crew of boys to continue the Empyrean’s mission.

Perhaps it’s because Shadowmagic was so disappointing that I liked Glow as much as I did; I was expecting your now traditional young adult novel. You know, pretty cover, shoe-horned love triangle between the “good” boy and the “bad” boy, lots of flash, little substance. But Ryan surprised me here by examining gender and sex in a futuristic culture where it is your duty to bear children, because how else will the human race survive? And it’s this focus on child-bearing (and thus sex) that complicates the lives of the girls on both ships. On the Empyrean, a focus on sex has the adult men ogling and even abusing the teenage girls, which is rightly depicted as disgusting, but the New Horizon’s focus on rearing children can be just as damaging. At one point, Waverly’s eggs are harvested without her consent; as someone tries to justify it, she sullenly likens it to rape, which shuts them up quickly—part of Mather’s motivation for raiding the Empyrean was saving the girls from a crew she knew would abuse them.

Ryan also elevates her novel by striving to keeping things gray instead of black and white. While Mather does terrible and manipulative things, it’s all out of concern for humanity, her ship’s need for children, and her fear for the girls on the Empyrean. While I was worried after Waverly expressed her distaste for religion, religion isn’t demonized here—Kieran is spiritual, finds comfort in faith, and uses faith to inspire the boys as they try to rescue the girls and some of the adults without much hope. I do wish it had been set up a bit more, but it’s presented as a complex issue. It’s really fantastic to see all of this addressed in young adult fiction without the extremely tired trope of religion being presented as bad. Here, Mather twists it to her own purpose (which only deepens Waverly’s distaste for religion), and Kieran uses it to rebuild the community after the devastating raid.

However, Glow doesn’t completely escape the shoe-horned love triangle. For most of the novel, I had wonderful hopes. Waverly and Kieran are presented as a sweet and loving couple, and we actually meet them as Kieran proposes to Waverly. Their love for each other motivates them both through their respective stories—it alternates between the two of them—as Waverly wishes she could just see Kieran one more time and Kieran gets through some pretty horrific stuff by knowing that Waverly wouldn’t want him to give up. You want them to get back to each other as much as they do, because they love each other. Seth, Kieran’s main rival for control aboard the Empyrean, is initially presented as an alternative to Kieran, but both Waverly and Kieran have that thought and dismiss it in the course of the novel. I thought I was home-free! But, of course, at the end, he is cemented into place as the third member of this love triangle. I am tempted to give up and just let the crazy kids these days make their “Team Kieran” and “Team Seth” shirts, since we have apparently decided this is required for a franchise to be successful. But I can’t. If I give up, shoe-horned live triangles will win, and we can’t have that.

Bottom line: By examining gender, sex, and religion in complex ways, Glow elevates itself above a lot of the speculative fiction aimed at young adults these days. Unfortunately, while I thought I just might have finally found a young adult novel without a shoe-horned love triangle, that specter rears its ugly head at the very end. Sigh. Still, a fine outing from Ryan.

I received a free copy of this book for publicity purposes.

Glow will be released on September 13—tomorrow!