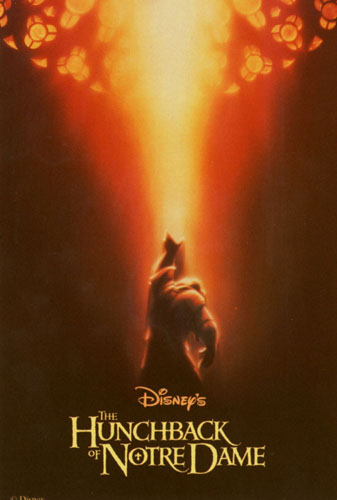 The Hunchback of Notre Dame is, perhaps, my favorite Disney film. I loved and adored it as a child, and I still do—it’s one of the very few nostalgic films that is not only just as good as I remembered it, but even better. It’s rich, complex, and dark. It’s also a terrible adaptation of the actual book. This film introduced me to what films, especially animated films, could be at their best, and I’m still so grateful for it. And I have to admit, as much as I want Der Glockner von Notre-Dame to come Stateside (why so lazy, Disney?), this is one of the few cases where I prefer the film to the musical. Let’s dig in!

The Hunchback of Notre Dame tells the story of Quasimodo, the titular hunchback. Raised by the pious, controlling Judge Claude Frollo who, unbeknownst to him, killed his mother, Quasimodo is forbidden to leave the belltower, though he still dreams of spending one day out in the real world. When he finally gets his chance, it turns on him—luckily, he’s saved by the justice-minded Esmeralda, a Romani dancer, who defies Frollo to do so. Quasimodo falls in love, but so does Frollo, who views his attraction to her as pagan witchcraft. With Frollo searching the city for Esmeralda, the two must work together to overcome Frollo, along with the help of Phoebus, a military captain recently back from the Crusades.

Let’s be honest—as an adaptation of the novel, this movie is terrible. Esmeralda and Quasimodo survive, Phoebus is a hero instead of a womanizing jerk, and Esmeralda is actually Romani, instead of secretly white. It takes the premise of the film and plays fast and loose with it, almost as if it were a fairy tale they could bend to their will. And you know what? It ultimately doesn’t matter. The story itself is an interesting choice for Disney; despite the gargoyles (we’ll get to them in a minute), it’s a very dark movie, dealing with racism, ableism (or lookism? Quasimodo is remarkably able), lust, victim-blaming, religion, and hypocrisy. And it deals with them well. In fact, most kids, despite being terrified of “Hellfire”, take years to realize what exactly Frollo is singing about and what he’s asking from Esmeralda. Perhaps the best part is that the story feels organic; it happens because the character (well, mainly Frollo) make decisions, not because certain plot points or beats need to be hit. Whenever someone complains about the Disney formula, I want to show them this movie.

The complex cast helps. Instead of the dumb, deaf brute he is in the novel, Disney’s Quasimodo is a nice and articulate guy—sheltered and developmentally stunted, to be sure, but still fundamentally decent. He wants to show his gratitude to Frollo and has internalized the idea that he’s a monster of sorts because of his deformities. Esmeralda is well aware of the inequalities in her society and trying to do something about it, although her impetuous nature combined with her ideals occasionally backfires. (In the stage musical, Esmeralda had to flee the last city she lived in because she fought a soldier trying to arrest a friend for no good reason.) And Frollo is a fantastic villain; he doesn’t want power for its own sake, he wants control—and Esmeralda represents such a threat to his control that he is driven to despicable and desperate measures. The gargoyles can be jarring but funny at best and out-of-place at worst, but the directors invite us to see them as figments of Quasimodo’s imagination, which makes them quite palatable to me. To be fair, Phoebus is less complex, but he’s also thoroughly decent, which is important.

You see, some people get upset that Quasimodo doesn’t get the girl; after all, he loves her and does so much for her. But I think it’s fantastic that he doesn’t. Frollo finds Esmeralda (and sexuality in general) disgusting inferior; Quasimodo idolizes her as a superior being, almost an angel. Phoebus, the man she ends up with, is the only man who relates to her as a human being. In the context of the novel (which, to be fair, I’ve never read) where Esmeralda is sexualized and objectified, it’s refreshing to see her agency confirmed by the fact that she can have want she wants, not what the protagonist wants for her. And it’s an important part of his character development that he accepts this—Frollo doesn’t, and look where that lands him. I told you it was deep!

The music remains Alan Menken’s finest work to this day; because the film is frank about Catholicism, it uses Latin chanting throughout to brilliant effect. The songs are amazingly sung—Tom Hulce’s Quasimodo, in particular, has a beautiful singing voice—and spectacularly sound-mixed. It sounds odd, but I miss that ambiance when I listen to the soundtrack instead of watching the film. Maybe it’s just because I like cathedrals so much. And it’s gorgeous to look at; sure, there’s some conspicuous CGI, but you can’t have everything, especially when Notre-Dame de Paris is beautifully and respectfully rendered and used so much in the film. “God Help the Outcasts”, in particular, shows off both the brilliant score and beautiful animation, on top of developing Esmeralda’s character. Dreamy.

Bottom line: In my opinion, The Hunchback of Notre Dame is the best film Disney has made—dark, complex, and devastatingly beautiful. Sure, it’s a terrible adaptation of the novel, but it also contains Alan Menken’s finest work to date. Pretty much flawless.

I bought this DVD from Best Buy.