Nausicaä of the Valley of the Wind by Hayao Miyazaki 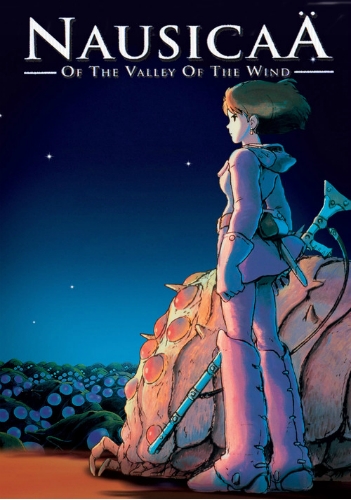 I’d never really given Nausicaä of the Valley of the Wind any thought—I knew of it vaguely from trailers for Studio Ghibli’s work (complete with the soothing voice of the gentleman who did trailer work for Disney in the 1990s), but it had never caught my attention. But when my dear friend Natalya entrusted me with her out-of-print volumes, which are from a time when manga was flopped in the United States, it definitely caught my attention. However, life kept me from getting around to them until this summer, when I finally sunk into Nausicaä’s world.

Nausicaä of the Valley of the Wind takes place in a post-apocalyptic world. After humanity decimated the environment with advanced weapons such as the intelligent biomechanical God Warriors, the now polluted world has been reduced to a handful of kingdoms squabbling for resources threatened by the Sea of Corruption, a toxic forest that’s slowly overtaking the land. Nausicaä is the princess of the Valley of the Wind, a small vassal state to the Torumekian Empire. When the Torumekian Empire decides to invade the theocratic Dorok Empire, Nausicaä and her countrymen are called into combat and into a journey that will shake the foundations of the earth…

In a way, Nausicaä of the Valley of the Wind reminds me of A Song of Ice and Fire. (Bear with me…) No one is wholly good or wholly evil, even if some characters are presented as much. Obviously, there’s a lighter and more whimsical tone to the proceedings, but this still a real world of violence and death. Even sweet, faithful, self-sacrificing Nausicaä can be a ruthless killer, to such a degree that she shocks herself and those around her. From my experience with Miyazaki’s work in film, I was surprised by this. It’s a dark world, where Nausicaä’s idealism and willingness to sacrifice herself for what she believes in is the only light. This made for more of an emotional connection than I’ve experienced with Miyazaki before—people die, people suffer, people are exiled, and, most importantly, people move on. I teared up several times while reading it.

While Nausicaä’s personal journey has Messianic overtones—on her speedy glider, she fulfills a prophecy about a winged, blue-clad savior on a field of gold—hers is not the only story. This is a political squabble dwarfed by a looming environmental threat, and we see plenty of players, from Nausicaä’s loyal guards to fugitives to my personal favorite, Kushana, a princess of Torumekia who is ruthless in battle and fiercely loyal to her men, as they are to her. She and Nausicaä learn from each other, even as their ideologies clash. An article I read recently discussed two of the bigger young adult heroes of the last twenty years as movement mascots that are not unique in and of themselves; while Nausicaä has a unique connection with the Sea of Corruption and the animals inside of it, she also functions as a movement mascot, manipulating the mythos building around her in order to forge peace by inspiring fugitives. There’s a moment where Nausicaä, shying away from the bloodshed and manipulation of war and politics, is forced to look at all the blood on her hands. It elevates her beyond a sort of angelic and pure ingenue; no one like that can exist in Nausicaä’s world, although she’s the closest thing to it.

This was my first foray back into manga since my preteen days, so I’m glad I enjoyed it, although I wasn’t blown away by it. The art style will be familiar to anyone who has seen any of Miyazaki’s work, right down to the fluffy bob with bangs that his heroines almost universally sport. (Kushana starts off with braids, but cuts them off as a pledge to her fallen men that she will avenge them. Told you she was awesome.) I’m trying to approach graphic novels from another angle. In Zombie Spaceship Wasteland, Patton Oswalt mentions that comic book geeks often evolve into film geeks and speculates that this is so because comic book panels are essentially storyboards. With that in mind, I tried to slow down and evaluate each panel—as a reader, my impulse is just to read the text. But even so, the action can be confusing, albeit cool—imagine a cavalry charge on giant emus backed up by antique gunships. I was a bit taken aback by the dip in quality when it came to the fourth and final volume of this collection; useless footnotes are added in and characters’ names are misspelled. It’s a slight detail, but if you’re a perfectionist in search of a quality set, Nausicaä of the Valley of the Wind, check out another set instead.

Bottom line: Nausicaä of the Valley of the Wind is a sweeping, post-apocalyptic epic about political squabbles dwarfed by an environmental threat in a world of grey—even the sweet and self-sacrificing heroine has a dark side. An interesting read.

I borrowed these books from a friend.

The cover above is actually from the film version—there is no omnibus for Nausicaä of the Valley of the Wind.