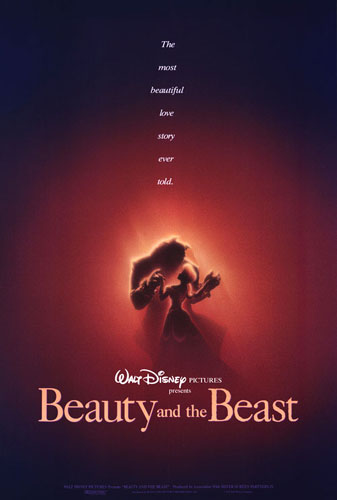 It’s time. I’ve made more than enough bitter, obscure remarks about how I don’t like Beauty and the Beast—it’s time to tell you why. To be totally fair, saying I don’t like a Disney movie is like saying I don’t like a particular flavor of frozen yogurt—I still love frozen yogurt. But it still boggles my mind that Beauty and the Beast was nominated for Best Picture back when that actually meant something. Compared to other animated films, especially the films of latter half of the Disney Renaissance like The Lion King and The Hunchback of Notre Dame, it’s… lacking. And I suppose people assuming my favorite Disney princess is Belle because we’re both French bibliophiles puts a damper on things. In the interests of fairness, I watched Beauty and the Beast one more time to give it a chance to explain itself.

Beauty and the Beast takes Jean Marie Le Prince de Beaumont’s adaptation of the traditional fairy tale and streamlines it—when the beautiful (and bookish) Belle’s father is imprisoned by a magical Beast, Belle offers to stay in his stead at the castle. As the two spend more time with each other, they learn from each other and form an unlikely friendship and, perhaps, more—but it’s threatened when the townspeople learn about the hideous Beast.

Le Prince de Beaumont specifically adapted Gabrielle-Suzanne Barbot de Villeneuve’s version of Beauty and the Beast into a piece aimed at acclimating young girls into arranged marriages; you don’t know if your husband will be a beast or not, but if you love him enough, he’ll turn into a prince. (I’m already creeped out!) Naturally, nearly every adaptation of the fairy tale gets accusations of Stockholm Syndrome lobbed at it. I have to admit, my problem with Beauty and the Beast is that it almost rises above the material, but ultimately fails. In Belle’s “I Want” number, “Belle (Reprise)”, Belle explicitly states what she wants in life—someone to understand her, which is ultimately fulfilled, and an adventure in the “great wide somewhere”, which never is. Half of her motivation suddenly vanishes and the film doesn’t appear to care, although Belle is, supposedly, our main character. (In actuality, most of the film is from Beast’s perspective.) A character’s motivation can change, of course, but you have to address it instead of ignoring it. To be fair, Belle is prepared to abandon the Beast in the snow after he’s rescued her from wolves and, in a wonderfully and subtly animated moment, decides to stay and help him. But that small moment took me years to see; it’s too small for such a big change. The stage adaptation addresses her change of motivation with the song “A Change in Me”, where Belle explicitly tells her father she no longer wants what she outlined in “Belle (Reprise)”. I was floored when I learned it was a song written to entice Toni Braxton to the part a few years into its run—it’s not even included on any English language cast recording. (Thankfully, Susan Egan, the original Broadway Belle, recorded it.)

In fact, that’s probably why I don’t like “Be Our Guest”. With a Disney animated features, you’re looking at, more or less, an hour and a half of running time. There’s no room to waste time. While “Be Our Guest” is a fun number (especially in the stage adaptation; I occasionally want Belle and Lumiere to run off together, but that’s neither here nor there), it doesn’t develop character and it doesn’t move the story along—I would vastly prefer using that time to put in a song like “A Change in Me”. (And don’t get me started on “Human Again”. I refuse to accept that as actually part of the film.) All of this isn’t to say that I don’t like the music in this film; the main motif in “Prologue” sends chills down my spine and “Gaston” is a whole lot of dastardly fun. (Who doesn’t love a pub sing?) But the sound mixing in the film can be off—“Gaston”, in particular, is sort of just dropped in. Of course, I’m comparing it to The Hunchback of Notre Dame, which is, I argue, Alan Menken’s greatest work to date and sound mixed to perfection. …We’ll get around to The Hunchback of Notre Dame, I promise.

Beauty and the Beast can a beautifully dark film, but occasionally gets distracted with the wacky antics of the talking objects. (It took Disney a while to get a handle on the sidekicks during the ‘90s.) Belle’s first encounter with the Beast is harrowing, as is her discovery of the enchanted rose and, of course, the marvelous transformation sequence. Beast, as voiced by Robbie Benson, is a warm guy underneath his lightning and thunder, and Belle is a strong young woman who loves her father; I just wish her motivation wasn’t swept under the rug. Gaston is a wildly fun villain, going from hilarious to a legitimate threat easily. But, while I enjoy the talking objects (Lumiere above all), “Be Our Guest” and, yes, “Human Again” are too bright and cuddly to make Beauty and the Beast a completely satisfying and mildly Gothic story. While it’s enjoyable and has merit, it still has some pretty big problems. (And I’m still confused by the Best Picture nomination.)

Bottom line: Beauty and the Beast has problems—namely, pacing and never addressing Belle’s change of motivation (which, funnily enough, could both be fixed by knocking out “Be Our Guest” and putting in a song like the stage adaptation’s “A Change in Me”, but I digress). Its beautiful, moody, and lightly Gothic sensibility is often dropped for colorful, cheerful numbers with the talking objects, and the sound mixing is a little… abrupt. Definitely an animated classic, but also definitely not something worth a Best Picture nomination back when that mattered.