The Hero with a Thousand Faces by Joseph Campbell 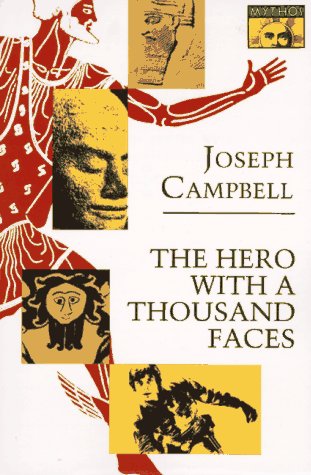 It took forever to read this book, because I had to read two different copies of it. Being both confident and an idiot, I picked up The Hero with a Thousand Faces during finals (as well as two other books that went straight back to the library unread). I got about a third of the way through before the end of the semester, neglected to copy down marked passages to my commonplace book, and returned it. I mention the commonplace book because that’s the reason I had to start over from the beginning, rather than having it be an open-ended loose end hanging over my head for two weeks. I even hit up the library before I even got to my house to see if they had a copy. It’s been a trial, but I now finally have the work of comparative mythology under my belt.

In The Hero with a Thousand Faces, Joseph Campbell examines different mythologies in order to get at the similarities found in all or most mythologies—hence the term “comparative mythology”. Going step by step (and using examples pulled from all over the world), Campbell constructs the monomyth, a universal structure found in mythologies, folk tales, and fairy tales. You probably learned about it in middle school as “the Hero’s Journey”, but the monomyth doesn’t concern only the hero, but the society in which the hero operates.

The Hero with a Thousand Faces was published in 1949 and then revised in 1968—I’m not sure how extensively it was revised, but both editions I read were the same. The one from the local library at school had Luke Skywalker on the cover, referencing Lucas’ relationship with Campbell and the influence he had on Star Wars. In fact, after reading this, the prequel trilogy makes more sense, in that Lucas was following the formula so strictly it went… weird places. It’s certainly dated; Campbell almost universally refers to a masculine hero and, while his thoughts on the symbolic role of the victim are fascinating, and a female victim. To be fair, he does discuss one or two stories with female heroines. And while he does his best to avoid language that might value or devalue a particular mythology, some of his language can be dated. But his ultimate conclusion is all-embracing—“The differentiations of sex, age, and occupation are not essential to our character, but mere costumes which we wear for a time on the stage of the world. The image of man within is not to be confounded with the garments” (385)—and its philosophic ramifications, I find, are remarkably validating.

This is most definitely an academic text. While Campbell is never boring, he’s also never gripping—he states his intention in the introduction and executes it, going slowly as to point out how seemingly different stories are, in fact, using the same structure; the differences come from certain milestones being minimized or maximized or, sometimes, just achieved in subtle ways. But if you’re interested in this sort of thing, it’s very rewarding. Neil Gaiman “got about half way through The Hero with a Thousand Faces and found myself thinking if this is true — I don’t want to know. I really would rather not know this stuff. I’d rather do it because it’s true and because I accidentally wind up creating something that falls into this pattern than be told what the pattern is” (Ogline). But I have to be totally honest—I don’t feel like I’ll be second-guessing my steps writing from now on or suddenly become unable to not see the pattern when I’m reading. What Campbell is looking at here is myth, not fiction; for every book that follows the monomyth, there are ten that don’t. Sure, you can split hairs and analyze it down, but I do think the monomyth is just one formula among many. I think speculative fiction writers and readers, especially when it comes to fantasy, are particularly antsy about the monomyth—after all, the granddaddy of modern fantasy, Tolkien, specifically set out to write an alternate mythology.

Ultimately, I think this is a very valuable resource for writers of all genres and anybody who likes a good story. By boiling down all these mythologies down to a point, Campbell shows the universality of myth and story and how it can ultimately bring us together. We may not recognize all the trappings of a myth foreign to us, but we do know the monomyth it fits into. But I’d caution anyone from following it too slavishly instead of using it as a tool—I mean, that’s how Star Wars went weird and Eragon happened.

Bottom line: The Hero with a Thousand Faces is a dated and, frankly, dry academic text—but its ultimate conclusion is so affirming and its exploration of the commonalities of myths so interesting that’s it’s still a good read. It’s also an important resource for readers and writers alike. Give it a shot.

I rented these books from the public library.

13 thoughts on “Review: The Hero with a Thousand Faces”