As you may have gathered, I am an enormous fan of The Lord of the Rings. When Fans, Bloggers, and Gamers inspired me to be a better fan, the effort concluded with my current happy home at TheOneRing.Net forums. So, when I heard that they were screening the Extended Editions in theaters this summer, I may have flipped a little. But I needed someone to go with—it’s funner with friends—and, of course, I needed something to wear. After my cinephile friend and fellow Ringer Natalya said she would go, I decided it was time—it was time to make one of my dream costumes, the Éowyn costume. Eighty bucks of fabric and notions and about a week of labor later, she was done. (Thank God I was working off a pattern!) For the last three Tuesdays of this month, Natalya and I—as Merry and Éowyn—headed into town to watch The Lord of the Rings the way they were meant to be seen.

First off, here’s the costume—that skirt has six yards of fabric in it, which was as much of a pain as it sounds. And it’s cream.

(Incidentally, if you are interested in making your own Éowyn or Arwen dress, I used Simplicity 4940. It’s an out-of-print pattern, but you can find it for under ten bucks online—I paid six for my copy. It has directions for Éowyn’s shieldmaiden dress, Arwen’s mourning dress, and a gown that can be used for Éowyn’s green velvet dress or Arwen’s riding ensemble.) The sword is Natalya’s; my only plastic sword is a pirate one, which would just be inappropriate. And I do not know why I’m apparently making my Hugh Grant face. 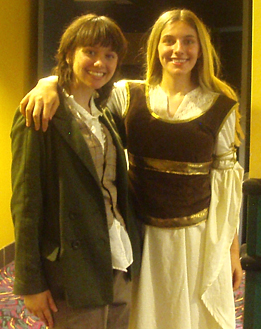 That’s Natalya and I, obviously—a kindly usher took this before the first showing. Each Tuesday, we left our hometown at three, loaded up on snacks, and made our way into the city to see it on the big screen. 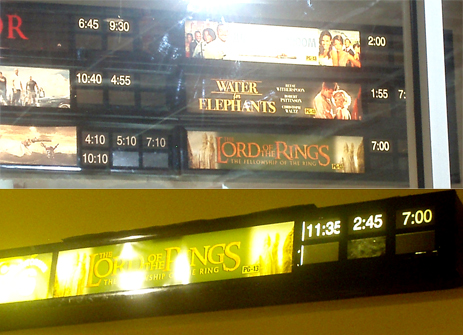 The showing for The Fellowship of the Ring was actually kind of quiet; maybe twenty people tops showed up. I’ve seen The Fellowship of the Ring many, many times, in both theatrical and extended cuts, so I didn’t enjoy as much as, say, the little girl who was there with her dad. The pre-show content TheOneRing.Net promised were four easy pieces of trivia that looped over and over again. Not cool. It started with an ad for TheOneRing.Net (complete with a clip of Peter Jackson hinting at The Hobbit back in 2004), an adorable ad for WETA Workshop, a commercial for next week’s showing, a commercial for the Blu-Ray editions these screenings were promoting, and a special message from Peter Jackson from the set of The Hobbit. Everything was in Blu-Ray quality, and seeing that on the big screen is fantastic. I could see everyone’s contact lens, it was so clear and detailed, and I could pick out the digital doubles. The remastering didn’t change any special effects, and it was amazing to see how they’ve held up over the past ten years.

Natalya made me stay through the fan club credits—although, to be fair, an usher told us that there would be extra content after the screening—but I didn’t feel as if it were long.

The showing for The Two Towers went much the same, although the marginally larger audience was comfortable enough to actually talk to each other beforehand now. To be fair, I was asking everyone what they thought of Tauriel, who was announced in between screenings. I’ve always loved how the scope opens up in the second film, and seeing Helm’s Deep on the big screen was harrowing. It was funny, though—while I’ve seen The Fellowship of the Ring ad nauseum (I remember when I got the Extended Edition DVD), I don’t watch the second two that often, mostly because I have to go through the first one to get to them. So I’ve conflated them in my mind; I was waiting to see scenes that are actually in The Return of the King. But getting to watch the introductory Rohan scenes were fantastic.

But The Return of the King was the best screening. First of all, the film itself is meant to be seen on a big screen. I was absolutely stunned by the last half of the film and its epic scope; it was like my eyes couldn’t take in enough. Obviously, I started crying about halfway through; this is one of my favorite stories in the entire world, and it’s so beautifully rendered by Peter Jackson and company—I even love the added bits, like Théoden and Éowyn’s final encounter and Liv’s song. But the best part was having a big audience to share it with. We clapped, we cheered, we laughed, we cried, we snickered. (Oh, Figwit—I mean, Lindir!) I may have told Sam to “GO FOR IT!” when he finally decided to talk to Rosie, which at least was quieter than the gentleman who yelled “NO!” when Frodo got stung by Shelob. I cried and laughed so much that my eyes itched and my mouth twitched when I wasn’t smiling. It was amazing. Truly amazing.

If they ever come back to theaters, I highly recommend that you go see them if you love them—or at least see The Return of the King on the big screen with like-minded folks. It’s an unforgettable experience.

This week, I got through Kristin Cashore’s Fire and started on Adrienne Sharp’s The True Memoirs of Little K—the former was a bit disappointing and the later is… not what I expected. Perhaps more importantly, however, my hold on A Storm of Swords came in! I have no idea when I’ll fit it into my reading schedule, but what with the release of A Dance of Dragons looming, I can’t wait to tear into it. Soon, soon…

Tor/Forge is giving away a copy of Original Sin until Tuesday. Tor.com is giving away ten copies of Bill Willingham’s Down the Mysterly River until Tuesday. Alita at alita.reads is celebrating her second anniversary by giving away A Monster Calls, The Fault in Our Stars, Miss Peregrine’s Home for Peculiar Children, or a book of your choice for under fifteen bucks until Thursday. Anastasia at Birdbrain(ed) Book Blog is giving away a copy of Wanderlust until the 14th. Tor/Forge is giving away a bundle of books edited by George R. R. Martin, as well as a random summer reading bundle, until July 19; you must sign up for their newsletter. The Baen Free Library is full of free downloads, including The Shadow of the Lion and On Basilisk Station. Night Shade Books is offering Butcher Bird and Grey as free downloads at the moment. Vertigo Comics is offering free downloads of the first issue of several series, including Fables, The Unwritten, and Y: The Last Man. (And you will go download The Unwritten.) If I’ve missed your giveaway or freebie, drop me a line!

Do you attend screenings of films already released on DVD?

10 thoughts on “The Sunday Salon: The Lord of the Rings Extended Editions Showings”