In Great Waters by Kit Whitfield 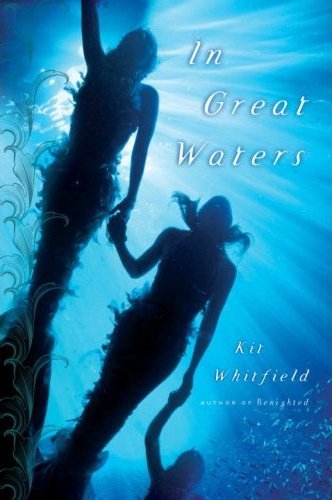 I have to be honest, I didn’t hold out much hope for In Great Waters. While the premise was interesting enough that it got onto my reading list, I dragged my feet about adding it. The cover certainly didn’t help—it puts me in mind of generic teen supernatural fiction, rather than a historical novel with mermaids. Still, when I got home, I put it on hold for arbitrary reasons I no longer remember, and I thought it might be a nice palette cleanser between Fans, Bloggers, and Gamers and picking up The Hero with a Thousand Faces again. And then it blew me away.

I love it when that happens.

In Great Waters takes place in a world where deepsmen—what we might call merfolk—made themselves known to the landsmen in Venice during the Middle Ages, when a hybrid named Angelica rose from the waters, allied her people with Venice, and married the doge. Since then, the royal families of European nations with any sea boundary have been composed of such hybrids, but interbreeding has become a problem. In England, the royal family remains without any viable male heirs, which leaves the young Princess Anne in a precarious position as politicking reaches a fever pitch—aided by the secret existence of Henry, a bastard hybrid with his eyes on the throne.

I need to read more Kit Whitfield, clearly. I’ve mentioned before that my favorite writers think things through and have a knack for detail, like Michael Chabon and Jacqueline Carey. Whitfield has this in spades. Her worldbuilding is flawless—for instance, while the deepsmen look more or less like your traditional merfolk, the hybrids have bifurcated tails that function like legs, although the now sickly royal families can barely carry their weight… hence canes, which can only be used by the royal hybrids. I actually bookmarked this article at io9 about how mermaids would view the world underwater for a possible project, and Whitfield nails every one of them—the lung capacity, the sheer loudness of their voices, and the eyesight. Not to mention the political implications that hybrids pose; while bastards are usually killed by royal families anxious to keep the succession clean, they can also take thrones for their own. It’s fascinating but, most importantly, unobtrusive—Whitfield never derails the plot to infodump about her fascinating world, which must have been tempting. She leaves you wanting more.

Our two protagonists are Henry and Anne. Because of Henry’s upbringing in the sea and upbringing at the hands of Allard, a scholar under the sway of Robert Claybrook, the closest thing thing this novel has to a villain, we learn a lot of the worldbuilding organically, but Henry is a fascinating force of nature until himself. He’s cruel, stubborn, and, remarkably, just; his disgust with the lies of politicking and his commitment to not lying becomes an important plot point towards the end of the novel. I can see how Henry might turn off some readers, but he’s not an evil character; he’s a product of the sea, where life is move or die. He’s stunningly complex, which also goes for Anne. Unable to play the games of court well, Anne cultivates a reputation as a devout simpleton—while her faith is unshakable, she’s also clever. And scared. And wants the best for her sister, even when circumstances force her to threaten war against her. Whitfield doesn’t deserve complexity for her two leads; the rest of the cast has organic and sometimes conflicting motivations, like Henry’s best friend, the landsman John. These characters, deepsmen and landsmen alike, feel like real people; I became so invested in these characters that I worried about them when I wasn’t reading the novel. It’s truly impressive.

Whitfield also uses In Great Waters to explore themes of belonging, family, and othering. I was fascinated by the subtle genderbending applied to the royal hybrids, as they’re already physically othered from both deepsmen and landsmen; Henry patterns himself after Angelica (he scoffs at the idea that she rose out of the sea speaking perfect Italian and concludes that she was a smart bastard like him), and the English royal women are referred to as princes, princely, princelings, and prince-like so often that it has to be intentional. Anne is struck by Henry’s lack of family loyalty and even envies the freedom it affords him, and Henry is constantly trying to negotiate his alienation in landsmen and even royal society. It’s a very rich text. I do, however, have to say that I wish the climax was a bit bigger; while it was in character and made sense, it was a little, well, anticlimactic. But it’s a small misstep in a book with pacing so good I didn’t even notice it (which is the idea!), wonderfully complex characters, and an enormous amount of thought put into it.

Bottom line: Kit Whitfield’s In Great Waters is an impressive accomplishment—with thoroughly thought-out worldbuilding, complex characters, and deep, resounding themes, it’s utterly fascinating and engaging. The ending could be a bit bigger, but that’s not much of a complaint. Read it.

9 thoughts on “Review: In Great Waters”