Despite my love of doomed princesses, dark fantasy has never really grabbed me—at the end of the day, I do want hope. (In my favorite doomed princess scenario, The Legend of Zelda: Ocarina of Time, she only thinks she killed her hero or erased him from existence entirely by accident! She remains doomed nonetheless.) But that’s no reason to ignore the genre (subgenre?), so here are the two main dark fantasy entries on my reading list.

From a dazzling new voice in fantasy comes a mesmerizing tale of treachery, passion, intrigue, betrayal, and an act of pure vengeance that threatens to bring down a kingdom.

Seething with decadent appetites unchecked by law or gods, the court of Antyre is ruled by the last of a dissolute aristocracy. But now to the kingdom comes a handsome, enigmatic nobleman, Maledicte, whose perfect manners, enchanting charisma, and brilliant swordplay entice the most jaded tastes . . . and conceal a hunger beyond reckoning.

For Maledicte is actually a woman named Miranda–a beautiful thief raised in the city’s vicious slums. And she will do anything–even promise her soul to Black-Winged Ani, the most merciless of Antyre’s exiled gods–to reclaim Janus, the lover whose passion still haunts her dreams. As her machinations strike at the heart of Antyre’s powerful noble houses, Miranda must battle not only her own growing bloodlust, but also her lover’s newly kindled and ruthless ambitions. As Ani’s force grows insatiable and out of control, Miranda has no choice but to wield a weapon that may set her free . . . or forever doom her and everything she holds dear.

Memory initially turned me onto this book; ignore the blurb—Maledicte is a transguy, not a girl in drag. So, a trans hero plus a dark, decaying aristocracy? Goodness me, sign me up.

Memory enjoyed it, but not as much as she would have liked—the character development is kind of… missing. Robert at Fantasy Book Critic describes it as a poor man’s Jacqueline Carey’s The Count of Monte Cristo, which made me swoon, despite the lack of development he pointed out as well.

A Companion to Wolves by Sarah Monette and Elizabeth Bear 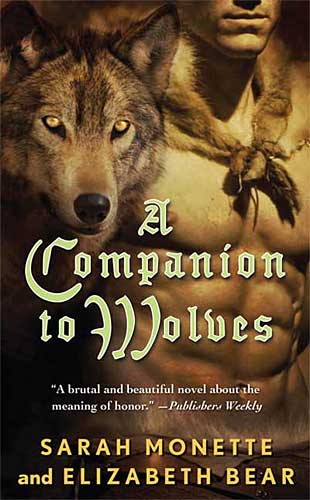 A Companion to Wolves is the story of a young nobleman, Isolfr, who is chosen to become a wolfcarl — a warrior who is bonded to a fighting wolf. Isolfr is deeply drawn to the wolves, and though as his father’s heir he can refuse the call, he chooses to go.
The people of this wintry land depend on the wolfcarls to protect them from the threat of trolls and wyverns, though the supernatural creatures have not come in force for many years. Men are growing too confident. The wolfhealls are small, and the lords give them less respect than in former years.  But the winter of Isolfr’s bonding, the trolls come down from the north in far greater numbers than before, and the holding’s complaisance gives way to terror in the dark.

Isolfr, now bonded to a queen wolf, Viradechtis, must learn where his honor lies, and discover the lengths to which he will to go when it, and love for his wolf, drive him.

Now, I don’t read a lot of fantasy featuring companion animals—in fact, I can think of very few beyond His Dark Materials, which technically isn’t. But you know how I love fantasy deconstructions, so this feels like a logical step; a book that takes the convention of that subgenre to their logical extremes. Deconstruction at its heart. Delicious.

Robert at Fantasy Book Critic enjoyed it, but noted that names can get similar and, despite its frank sexuality, the story is time-tested. Joe Sherry at Adventures in Reading found it an interesting exploration of masculinity, since the mechanics of this world force a Viking-esque world to deal with homosexuality.

One thought on “The Literary Horizon: Maledicte, A Companion to Wolves”