Having recently listed basically the bulk of my graphic novel collection on eBay, I’m quite in the mood for some graphic novels—DC, of course. I’m a DC girl, through and through; while I like Marvel’s films, there’s something too snarky and winking about it for me in the comics. I’m mostly an aficionado of Batman and the whole Batfamily, but I think it’s time to try something different. To that end, the very first Elseworlds graphic novel and the first installment in Jaime Reyes’ stint as the Blue Beetle ought to do quite nicely.

In an alternate future where England managed to secure America and avoid revolution, the Inquisition (the enforcers of the church) rule the streets with an iron fist. Bruce Wayne’s parents were murdered before his eyes. But instead of training for years to exact his vengeance, Bruce takes a path of piety. It isn’t until Inquisitor Gordon informs him that the state ordered his parents murder that Bruce begins to question his faith. Donning his father’s old demon costume from a Passion Play, Bruce takes to the streets as Batman.

It’s no secret that comics are ridiculously difficult to jump into; most series are well into their runs, and character development is sometimes left by the roadside to keep things going. Elseworlds offers a different way to explore DC characters; these one-shots take established characters and put them in odd, often alternate history settings. For instance, Superman: Red Son asks, what if Supes landed in the USSR instead of Kansas? Batman: Holy Terror is the first Elseworlds title to bear the logo (though it appears to be the third Elseworlds title), and the concept just sounds fascinating. Part of the reason I’m such a Batfamily fan is because there’s so much ground to cover, and this graphic novel seems poised to look at the ground in an interesting new way.

MGK at Mightygodking.com considers Batman: Holy Terror to be “one of the best Batman comics ever written“. Which is high praise from a guy people want to actually write for DC. Hilary Goldstein at IGN found it middling, especially a section where Batman discovers what the state is doing to superpowered humans.

Batman: Holy Terror was published in 1991. 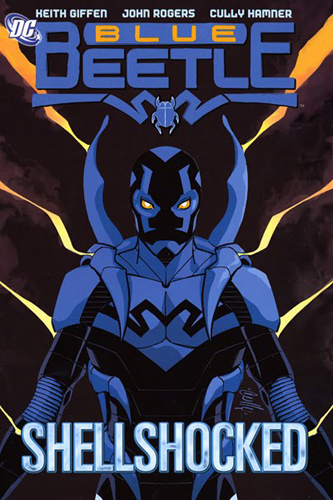 Collecting THE BLUE BEETLE #1-6! Tearing its way through the events of DAY OF VENGEANCE and INFINITE CRISIS, the mystical Blue Beetle scarab has chosen its new guardian: teenager Jaime Reyes! But supernatural powers can be a blessing or a curse, and when it comes to the powers of the Scarab, you don’t get one without the other.

I like legacy characters—characters who have their mantle handed down from parent to child or mentor to mentee. And from the little I’ve encountered of Ted Kord as the Blue Beetle (the template for Watchmen‘s Night Owl) and his bro for life, Booster Gold, I like it. But Ted, unfortunately, was murdered—a death that has surprisingly stuck. (Though he’s risen from the dead to torment Booster.) Jaime Reyes is Ted’s successor as the Blue Beetle, and I’ve heard great things about him—a teenage hero of color with a supportive and loving family? Peter Parker, eat your heart out.

Jessica at Active Voice—the woman who actually introduced me to Blue Beetle and Booster Gold—absolutely adores the series, with its well-developed characters, references to the Blue Beetle legacy, and a hero that actually trusts his family. The anonymous blogger at Collected Editions thought it had a strong start, but faded once Hamner left the series for a short while.