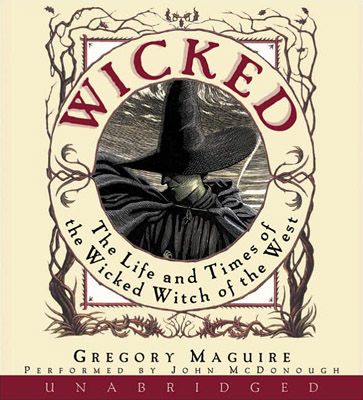 I’ve never seen The Wizard of Oz. Yes, that particular piece of Western pop culture and I have never crossed paths; I mean, I know most of it through cultural osmosis, but I never saw it as a child and, as an adult, I’m frankly not that interested. But the magical thing about L. Frank Baum’s creation is that it’s in the public domain, meaning that publishing The Wizard of Oz fanfiction is kosher. Which brings us to Wicked, one of my favorite books from high school, as well as one of my favorite examples of how fanfiction can deepen and correct a text. It’s a terrible shame that Gregory Maguire can never quite live up to his 1995 adult fiction debut—Son of a Witch is decent, but A Lion Among Men is just a frustrating detour from The Wicked Years’ main story. I’m still totally going to read Out of Oz when it comes out in November, though—I’ll just rent it instead of buying it.

Wicked is subtitled as “The Life and Times of the Wicked Witch of the West”. The villain of The Wizard of Oz is reimagined as Elphaba Thropp, a woman whose good intentions seem always doomed to fail. Elphaba is seen through the eyes of many people in her life—her mother, her college roommate Galinda (perhaps better known as Glinda the Good Witch), her college friend Boq, her lover, her lover’s children, and, finally, Elphaba herself… although she’s retreated so far into the disguise of Witch forced on her by society by then that she’s not really herself anymore, or, perhaps, a heightened version. This is an Oz where the rights of Animals are being chipped away at, religious conflicts run high, and the powers that be squabble over the forces of magic. There’s so much that Dorothy didn’t understand.

Wicked is thoroughly thought out—the perfect storm of politics and interpersonal relationships that leads up to Elphaba’s demise can all be followed in the text neatly and subtly. Maguire hasn’t made Oz dark for the sake of edginess or grittiness, which, I imagine, might have been tempting during the rise of the comic book anti-hero in the ‘90s, but rather it’s complex because people are complex. Deconstructions—although I don’t particularly think of Wicked as a deconstruction, though that might be because I’ve never read The Wizard of Oz—tend to do this, I notice, although there are certainly deconstructions that revel in grittiness for grittiness’ sake. It’s a world of competing religious beliefs, changing attitudes towards rural workers in the face of industrialism, and a recently deposed royal family. I’m not sure how much of this plays nicely with The Wizard of Oz canon, but it feels flawless—I think the best example of this are the infamous shoes. Given to Elphaba’s sister, Nessarose, by her father, they represent to Elphaba everything her father isn’t to her but is to her sister; after Nessarose’s death during her stint as the head of the recently seceded state of Munchkinland, they become a powerful political symbol that would be dangerous in the hands of the Wizard, Elphaba’s eternal enemy. Certainly explains why she wants them so badly, doesn’t it?

Maguire’s writing is at his best here—in his later books, you can often see him straining back towards this high point. There are beautiful and startling turns of phrases here, the wordplay can be both delightful and disturbing, and, most of all, it’s thoughtful and slightly different for each character that encounters Elphaba. And just as complex as the worldbuilding and style are the characters; all real people, trying to negotiate in a world that has privileged or unprivileged them. Elphaba, naturally, has the hardest time with this—a serious, green-skinned woman devoted to the unfashionable cause of Animal (as opposed to animal) rights, she uses her sarcasm as a weapon and a shield until the Wizard considers her a threat. We watch her change and grow as people encounter her through the years. And yes, Elphaba is where my love for prickly heroines come from; she does care, somewhere very deep down—but it’s also her most vulnerable spot.

This reading, I paid very close attention to queer characters in Wicked; Glinda is implied to have been a little in love (or at least sexually attracted) to Elphaba in college, Crope and Tippett are represented as “inverts”, and Elphaba’s father and mother had a mutual affair with a man named Turtle Heart. It’s a diverse crew, and I quite appreciated it—it gives Oz a breadth and reality that I enjoyed. The audiobook is read by John McDonough, whose husky, grandfatherly voice navigates Maguire’s writing wonderfully. His voices are subtle but distinctive; I especially enjoyed his no-nonsense and smirkingly stern Elphaba and how he aged her voice. It’s a superb audiobook, although my library copy was mildly damaged, forcing me to miss about half an hour of the entire thing. I do have to wonder, though—Wicked is, ultimately, a character study about one woman in order to explore good and evil. Considering the majority of female characters in the work and its female protagonist, why is it read by a man? It’s not really a complaint or a criticism, but rather food for thought.

Bottom line: Wicked shows what fanfiction, at its best, can do—correct and deepen a text. It’s a beautifully complex, well-written, and human piece of work, exploring the nature of good and evil through a character study of Elphaba Thropp, the Wicked Witch of the West. The audiobook is read wonderfully by the husky and grandfatherly John McDonough, though I’m left wondering why a novel with a female protagonist is read by a male reader. Still, an amazing book.

9 thoughts on “Reading by Ear: Wicked”