I will valiantly defend to the death the amazing, life-changing work that comes out of speculative fiction—by the way, have I mentioned you should read The Sundering by Jacqueline Carey recently? But there’s still always a time for good, old-fashioned pulp fiction, which is exactly what we’ll be looking at today.

A Princess of Mars by Edgar Rice Burroughs

Suddenly projected to Mars, John Carter found himself captive of the savage green men of Thark. With him was Dejah Thoris, lovely Princess of Helium. And between them and rescue lay a thousand miles of deadly enemies and unknown dangers.

A Princess of Mars is considered to be a classic sci-fi text, having been published in 1917—accordingly, this makes it both eligible for Project Gutenberg and for the delightfully subversive Penguin Classics cover. Perhaps it’s all the Penguin Austens I encountered last semester, but the combination of the pulpy, Silver Age with the usual Penguin packaging just makes me smile.

Amanda at the now defunct Life and Times of a “New” New Yorker found it to be a fun and straight-forward read, and the horror writer Jeffrey Thomas considered it to one of his top reads from 2008 at the Fantasy Book Critic.

A Princess of Mars was published in 1917.

The Coming of Conan the Cimmerian by Robert E. Howard 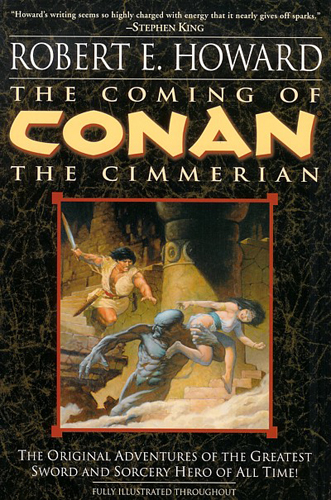 “Between the years when the oceans drank Atlantis and the gleaming cities . . . there was an Age undreamed of, when shining kingdoms lay spread across the world like blue mantles beneath the stars. . . . Hither came Conan, the Cimmerian, black-haired, sullen-eyed, sword in hand . . . to tread the jeweled thrones of the Earth under his sandalled feet.”

Conan is one of the greatest fictional heroes ever created–a swordsman who cuts a swath across the lands of the Hyborian Age, facing powerful sorcerers, deadly creatures, and ruthless armies of thieves and reavers.

In a meteoric career that spanned a mere twelve years before his tragic suicide, Robert E. Howard single-handedly invented the genre that came to be called sword and sorcery. Collected in this volume, profusely illustrated by artist Mark Schultz, are Howard’s first thirteen Conan stories, appearing in their original versions–in some cases for the first time in more than seventy years–and in the order Howard wrote them. Along with classics of dark fantasy like “The Tower of the Elephant” and swashbuckling adventure like “Queen of the Black Coast,” The Coming of Conanthe Cimmerian contains a wealth of material never before published in the United States, including the first submitted draft of Conan’s debut, “Phoenix on the Sword,” Howard’s synopses for “The Scarlet Citadel” and “Black Colossus,” and a map of Conan’s world drawn by the author himself.

Here are timeless tales featuring Conan the raw and dangerous youth, Conan the daring thief, Conan the swashbuckling pirate, and Conan the commander of armies. Here, too, is an unparalleled glimpse into the mind of a genius whose bold storytelling style has been imitated by many, yet equaled by none.

First off—no, I have never seen the Arnold Schwarzenegger films, and have no desire to. But the upcoming film starring Jason Momoa looks like hearty B-movie fantasy fare, and man, do I miss the days when mediocre fantasy films just happened; no concerns over whether or not moviegoers would go see it or not. And I don’t think I’ve ever read action-adventure short story collections, so bring it on.

Larry at the OF Blog praises Howard’s pacing and tension, but points out that these stories can be very backwards when it comes to race and gender. Carl V. at Stainless Steel Droppings absolutely loves them, though.

The Coming of Conan the Cimmerian was published in 2003.

11 thoughts on “The Literary Horizon: A Princess of Mars, The Coming of Conan the Cimmerian”