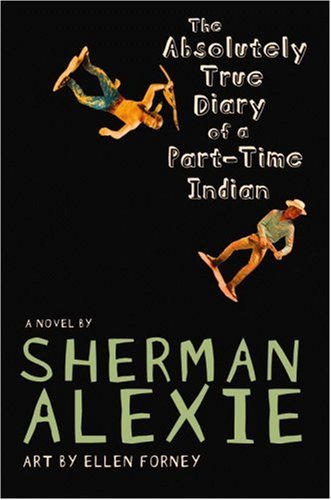 Ever since I started college, spring brings with it a new ritual—laying out on the quad and sunning myself like a cat as I read a book. While I don’t like the gender essentialism that comes with it, I’m always reminded of Jan Morris’ theory that women have a thinner barrier between them and nature and respond to nature accordingly. In any case, I stretched out on the first sunny day I could on the quad with The Absolutely True Diary of a Part-Time Indian. Now, as I’ve mentioned, most of the books for my children’s and young adult literature class can be hammered out in an afternoon, and this was no exception—but because of its compulsive readability, not just because of its length and target audience.

The Absolutely True Diary of a Part-Time Indian is the semi-autobiographical tale of Arnold Spirit Jr., a fourteen year old Native American living on the Spokane Reservation. Junior, as he’s known, is both poor and rife with medical problems. He survives mostly on his wit, the help of his best friend Rowdy, and cartooning. Junior looks forward to high school until he realizes that he’s being taught with the same books his parents were. With the encouragement of a teacher, Junior decides to enroll in Reardan High School, a wealthy school populated mostly by white kids. This decision forces Junior to grapple with his identity, history, and, of course, the pains of growing up.

I can’t believe this came out when I was sixteen. I feel as if I’ve known about this book for much, much longer—in my head, I think it morphed with Garrison Keillor’s writings on his own youth and ended up, in my memory, as a novel about a kid on a reservation during the 1970s. I suppose this may have come from the fact that, at the one dance featured in The Absolutely True Diary of a Part-Time Indian, Junior has to attend in one of his father’s suits from the seventies. In any case, this novel took me by surprise. It’s stunningly raw. Have I mentioned that one of my all-time don’ts is wanton cruelty to animals? I will remove a book off my reading list for this very reason; I don’t deal with it well. This novel opens with cruelty to animals, but it’s so important to show just how Junior and all the residents of the reservation have to survive—there’s barely enough money to feed the family on a semi-regular basis, let alone pay for a surgery for a dog. The Absolutely True Diary of a Part-Time Indian deals with these issues head-on spectacularly through the voice of its protagonist.

Junior feels like a real teenager—cocky yet insecure. His voice is loud, brash, and unapologetic, even to himself; he berates himself for his mistakes. As he navigates the new unspoken rules of Reardan, he discovers that nobody actually gets in fights—something Junior has had to deal with every day of his life. The first fight we see Junior involved in is incited by a trio of thirty year old men who beat up Junior for being different. He misses his friends, he focuses on the small stuff, and he loves girls. I suppose the semi-autobiographical element of this novel helps a lot, but everyone has a voice like this; even Penelope, his girlfriend, whose problems look trivial in the face of Junior’s, sounds like a real girl. It’s fantastic. Erin at Erin Reads has mentioned that the audiobook presentation, read by Alexie himself, is superb. I’d be interested in investigating it a few years from now, once I’ve forgotten enough.

In this class, we read books with an eye on social justice, and The Absolutely True Diary of a Part-Time Indian is ripe with such issues—poverty, information access (Junior is pitted against a Mac lover), alcoholism, violence, and oppression, just to start you off, all through Junior’s unique worldview. Scattered throughout the novel are Junior’s cartoons, some funny and most of them wildly revealing—I was stunned by his depiction of who his parents could have been, as well as the cartoon depicting a half-white and half-Native American Junior, with all the success on the white side. Junior deals with death without the benefit of his community during the day, and becomes outraged at the consumption of alcohol at a wake for someone who died in an alcohol-related incident. He rails against the system to the degree that he understands them; the inciting incident of the novel is just one of these. It’s a remarkable piece of work, combining an exploration of these heavy issues with a fantastic main character I think young adults will identify with. I am so glad I got to read this as part of the class; the reading list is partially redeemed by its inclusion.

Bottom line: The Absolutely True Diary of a Part-Time Indian succeeds wildly by marrying an exploration of deep issues at a human level with a fantastic and identifiable protagonist. A remarkable piece of work.

I bought this book from Amazon.

6 thoughts on “Review: The Absolutely True Diary of a Part-Time Indian”