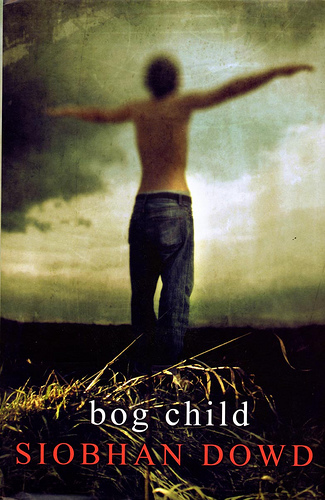 My children’s and young adult literature course is winding down; soon, there will be no more writing fanfiction for class. (I find this practice delightfully subversive, and I will miss it.) We’ve still got a pile of books left, but it’s already April—I’ll miss it and the discussions. But to be brutally honest, I won’t miss the majority of the books we read for the class. As I write this review, Speak and The Absolutely True Diary of a Part-Time Indian are ahead of me, and I really hope they’re amazing to make up for some of the lackluster material we’ve read for this class. Alas, Bog Child is definitely in the latter category.

Bog Child takes place in Ireland in 1981; the Troubles are in full swing and Fergus McCann just wants to get through his exams so he can study medicine in Aberdeen. When he and his Uncle Tally discover a bog child while cutting peat, Fergus assumes the worst—but Mel, as he’s nicknamed her, turns out to be a relic from the ancient past. As Fergus becomes involved in the research on Mel by Felicity O’Brien and becomes interested in Felicity’s teenage daughter, Cora, he tries to deal with his brother’s hunger strike in jail, pressure to run packages for the IRA, and the tension in his family.

Bog Child has a remarkably interesting premise; a kid during the Troubles discovers a bog child. Juxtaposing those two elements, which would be plenty of material for a young adult novel on their own, is an interesting combination, but Mel’s story is the only story I found interesting here—and even it fell flat. You see, Fergus has some sort of mental connection with Mel; he dreams about her life. But instead of assuming he’s dreaming stuff up, he assumes it’s what actually happened. During a board meeting about what to do with Mel, Fergus proposes a theory based on his dreams—a researcher who we are clearly not meant to sympathize with reasonably calls him out on it, but he’s run over by everyone else congratulating Fergus instead of merely taking it under consideration and asking him how he even knows that. And there’s no explanation for why Fergus and Mel have a connection. It’s just left unanswered, which frustrated me. This juxtaposition would have been better served with alternating chapters between Mel and Fergus. Still, her story is interesting in the short snippets of it we get; I would have liked a novel about Mel, but… well, I shan’t spoil it.

Dowd does capture the spirit of a teenage boy in Fergus, though much less in Fergus’ utterly useless friend Padraig; I honestly have no idea what Padraig adds to the story, other than really lame jokes we are supposed to find hilarious. (Because they’re lame? Because they’re funny? I don’t even know.) School struggles for primacy as he tries to sort through his reaction to his brother Joe’s hunger strike; his mother wants him to convince Joe to stop, while he begrudgingly respects Joe’s commitment to the cause. And his minor involvement with the IRA is motivated by his love for his brother; it takes Fergus a while to sort through his feelings on his Irish identity. But he often reacts… oddly. There’s a huge reveal at the end, where Fergus discovers just what he’s been running across the border. Had this happened to me or, I feel, any rational human being, I would have been consumed with a white hot rage—there’s simply no excuse for what Fergus’ immediate superior has done to him. But Fergus, after a punch or two, just laughs it off. I was utterly flabbergasted by this, and it made Fergus feel less like an actual human being and more like a character in a book; we can’t deal with the repercussions of this act because we’ve got other plot points to get to. The idea is not to let me see behind the curtain, people.

Dowd’s writing is nothing to write home about—in fact, her imagery often falls flat and draws you out of the story. There’s a moment where Fergus ponders the exam he’s just taken in such melodramatic imagery that I burst out laughing. I was astonished to check the summary on Amazon and find so many reviews gushing over the imagery; perhaps I just have different taste, but it felt so melodramatic and unnecessary to me to the point that I’m pointing it out here. Thank goodness Sherman Alexie is next on our literary itinerary for the class—I need something good.

Bottom line: An interesting premise—a teenager during the Irish Troubles discovers a bog child—falls flat in Siobhan Dowd’s Bog Child. The psychic connection between bog child and teenager is never explained, you can see the strings on the teenager, and the imagery is laughable. While the bog child’s story is interesting, reading the entire book isn’t worth it.

I bought this used book off of Amazon.