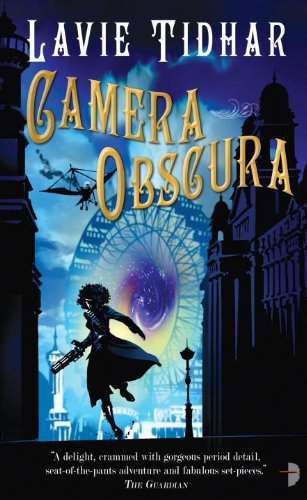 I feel I tend to neglect smaller presses when it comes to my reading list. I’m skittish when it comes to new books; I have a hard time wandering through a library or a bookstore and picking up something on the spot. I need to do research; I need to know what people whose opinions I trust think of it. Not that this saves me from reading bad books, but it does prevent some of the worst offenders from crossing my desk. But this reserve must be neatly folded away when I’m dealing with NetGalley; I just have to suck it up and reach a hand in. Hence Camera Obscura, which caught my attention because its protagonist is Milady de Winter from The Three Musketeers.

Camera Obscura takes place in a steampunk alternate universe, where machines rule France and mysterious lizards dominate the British Empire. In the late 1800s, Milady de Winter, an agent for the monolithic Quiet Council that secretly rules France, investigates a murder over a jade lizard statue that will change everything, including Milady herself. The investigation and its further implications will take Milady across the world and test the very boundaries of reality itself.

Milady de Winter was the reason I picked up Camera Obscura, and Tidhar’s Milady does not disappoint. (Incidentally, I find it hilarious that Milady is called such in literature—“Milady” sounds exotically British and like a reasonable name in French, but translators never parsed it out when translating it to English. Ah well, it’s too late now.) Milady is an African immigrant from Dahomey, whose mother died on the voyage over. It’s left ambiguous as to whether her mother chose this journey or they were forced, but the implications remain much the same to Milady. She’s tall, dark, and hard, although that last one occasionally goes over the top. (Milady enters the novel intimidating the police out of following up the initial murder and shooting at whatever she damn well pleases.) But she’s a complex character that goes through quite a lot in this novel; it’s hard not to be invested in her, and that’s really all I ask from a protagonist. (Eye-patches are optional, but Milady provides.) I’m still a bit unsure as to why characters from The Three Musketeers, which is set in the 1600s, are still kicking around in the late 1800s; in fact, Tidhar does the same thing with The Hunchback of Notre-Dame, which is set in the 1400s. But despite this anachronism, I thoroughly enjoyed Tidhar’s reimagining of one of the best baddies in literature.

The story itself is stuffed with action and plot—you get plenty of bang for your buck here. Milady journeys through underground Paris, aquatic laboratories, and Vespuccia, struggling with other factions as they all seek the jade lizard statue for their own nefarious purposes. She fights Chinese agents trained in martial arts, attends clockwork clubs and balls to ferret out information, and seeks to fulfill her own code of honor even against the wishes of her employer. There’s hardly a dull moment, which, of course, leaves little room for introspection, although Tidhar gets enough in for Milady that we get to know the woman behind the assassin. I imagine this would be a great read for a plane trip or a long road trip, although it sticks to the ribs in a way that most airport novels don’t. Call it a steampunk thriller, if you’d like. There are twists and turns not because the plot dictates, but because character politics dictate—while some of them can seem a little far-fetched to simply fulfill the Rule of Cool (kiss your productivity good-bye!), there’s ultimately some grounding and motivation for them. And that’s exactly how you should go about plotting… well, plots.

Camera Obscura is dark and violent—if you can’t stomach the first few chapters, there’s little hope for you. There’s severed limbs, a serial killer, and lots of drugging going on, not to mention a zombie-like virus that follows Milady as she searches for the jade lizard statue. (Oddly, they didn’t send the zombie klaxon sirens in my head off, so the zombie-phobic are safe here.) The darkness also goes over the top occasionally. But it all serves the story, and it serves the world as well. I was very impressed by Tidhar’s world-building, especially after Spellwright—what, no characters are telling each other things they already know for no reason? We only learn about Vespuccia, an alternate American democracy run by America’s indigenous population, when Milady goes there, despite having worked there often enough, and we learn about the lizards through organic conversations, although we ultimately discover where they came from. And I haven’t even touched on the other literary and historical cameos—even my beloved Irene Adler makes an appearance in a brief aside. Camera Obscura is the second novel in this series (after The Bookman), but you don’t need to have read it to enjoy this novel the way I did.

Bottom line: Camera Obscura is dark, violent, and a fine steampunk thriller that’ll stick to your ribs in a way other thrillers don’t. It’s stuffed to the gills with action and plot; while it does go over the top from time to time, the world-building is deftly done. And Tidhar’s Milady de Winter is fantastic. If you like steampunk or just action in general, it’s well worth a read.

Camera Obscura will be released on the 26th—tomorrow!