Marriage, a History by Stephanie Coontz 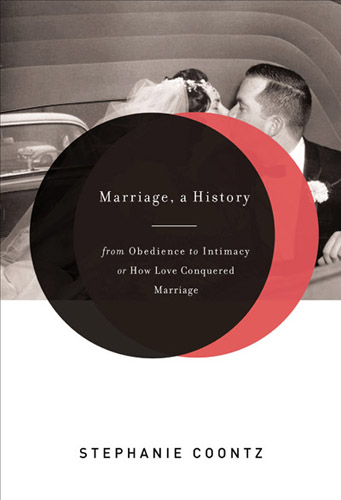 I’ll be honest with you—marriage freaks me out a little. At weddings, where others might see bittersweet moments as the father walks the bride down the aisle and later dances with her, all I see is the patriarchal history of the institution bearing down on what should be a private moment between a couple. Naturally, being asexual (even panromantically so) plays into this—considering what it would take to get me to the point of marriage, odds are slim, so I don’t ponder it all that much. Marriage, then, holds little interest for me save historically and sociologically, hence my interest in Marriage, a History.

In Marriage, a History, Stephanie Coontz takes a very close look at the Western tradition of marriage and breaks down so-called “traditional marriage”, which is, in fact, a remarkably recent innovation in marriage—the love-based male-breadwinner marriage under siege now is younger than the United States of America. Starting with why marriage cropped up in the first place and ending with the modern day, Coontz’s history of Western marriage is certainly revealing.

After I learn something interesting about the world around me, I try to spread the joy—for instance, did you know that royal antelope are tiny West African antelope? I, for one, enjoy living in a world where tiny West African antelope frolic. So it’s a compliment to Coontz’s research when I tell people what I learned from her work. I’d always understood marriage as an institution before, but Coontz taught me that marriage, as an institution, offered only one thing early societies couldn’t get any other way—in-laws. It was also the basic economic unit for a while; due to the gender division of work (each gender ending up with plenty), there was no way to be a single person running a farm in the medieval period in Europe. After the beginning, which is full of interesting anecdotes like the fact that “in the Chinese language the term love did not traditionally apply to feelings between husband and wife”, Coontz spends little time on marriage in other cultures to focus solely on Western marriage (16). I would have liked more, but Coontz has plenty of ground to cover even with that restriction.

As marriage lost its function as a basic economic unit and a linking mechanism between families and marriage became more and more of a private decision by individuals, the seeds of the love match was sown, and eventually came to fruition the late Victorian period—love and sanctuary became the primary motivations for marriage. (As opposed to the medieval period, when true love among the elites was celebrated—but usually found outside of one’s politically beneficial marriage.) What Coontz does best, I think, is examine how Western culture tried to function and maintain the patriarchy while holding up values that, taken to the logical extreme, should have encouraged gender and marriage equality. I was delighted to learn that the fight for same-sex marriage is nothing new; as laws against interracial marriages broke down in the 1970s, gay rights groups began to call for marriage equality, leading President Nixon to make the oddly prophetic remark that “I can’t go that far—That’s the year 2000” (256). Ultimately, though, I feel that Coontz didn’t explore same-sex marriage too much; I realize it’s not the focus of her book, but, as it does have an effect on her final conclusion, I would have liked to see more.

Despite the source material, Coontz can be dry. While I quite enjoy that she lets the research mostly speak for itself, I wish she’d offered a bit more insight throughout instead of almost exclusively at the end. I picked this up during my spring break in early March, and it felt like it took much longer than a 366 page book ought to take me. Perhaps the copious notes section made a visual impression on me that my mind just couldn’t shake. But ultimately, I’m glad I read it—it’s given me plenty to think about when it comes to the strange institution we call marriage.

Bottom line: In Marriage, a History, Stephanie Coontz explores the concept of marriage and its history in Western society, revealing such startling truths as the extreme youth of so-called “traditional” marriage. While I appreciate that she lets the research speak for itself, it can be quite dry until the end. Still, a very interesting read.

2 thoughts on “Review: Marriage, a History”