As I mentioned in my review of Jan Morris’ Conundrum, my female gender identity is rooted in connotations and images, not in my actual sex (though I am cisgendered). My gender identity is elastic enough that being read as male doesn’t bother me a whit, although it’s less common now I’ve got the princess hair (which handily turns into Legolas hair in a pinch). So you can imagine that gender essentialism gives me acid reflex. So today, we’re going to look at two books—one that looks at the supposed differences between the sexes, and one that looks at the social construct of gender.

Between XX and XY by Gerard N. Callahan 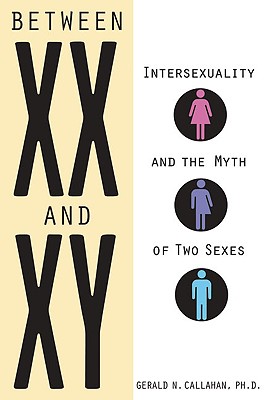 “On October 10, 1970, the day she was born, she was named Dorothy Maree Alaniz–a baby girl. Curiously, though, no one filled out a birth certificate that day. When the certificate was finally filed on November 5, the name on it was Rudolph Andrew Alaniz. Within less than one month after her birth, this girl became a boy.”

Every year in the United States, more than two thousand children are born with an intersex condition or disorder of sex development. What makes someone a boy or a girl? Is it external genitalia, chromosomes, DNA, environment, or some combination of these factors? Not even doctors or scientists are entirely clear. What is clear is that sex is not an either-or proposition: not girl/boy, XX/XY, switching between two poles like an on-off switch on a radio. Rather, sex is like the bass and treble knobs on that radio.

Between XX and XY provides a fascinating look at the science of sex and what makes people male or female. There are people born XXY, XXXY, or XXXXY, or with any number of variations in X or Y chromosomes, but those who do not fit into society’s preconceived notions about sex often face a difficult path in life.

Dr. Callahan explores why humans are so attached to the idea of two sexes, and examines our obsession with sex and sexual intercourse through the ages.

This is a recommendation from Nancy Pearl’s Book Lust; I wonder when I’ll read all the recommendations I got from her? In any case, after reading Natalie Angier’s Woman, biological essentialism drives me up the wall, and I want to see it torn down. Callahan’s work seems like a fine place to start.

Amy from Amy Reads found it thoroughly enlightening and fascinating, while Alan Ashton-Smith from PopMatters found the language a bit flowery, though ultimately an interesting and educational text.

Delusions of Gender by Cordelia Fine

A brilliantly researched and wickedly funny rebuttal of the pseudo-scientific claim that men are from Mars and women are from Venus.

It’s the twenty-first century, and although we tried to rear unisex children—boys who play with dolls and girls who like trucks—we failed. Even though the glass ceiling is cracked, most women stay comfortably beneath it. And everywhere we hear about vitally important “hardwired” differences between male and female brains. The neuroscience that we read about in magazines, newspaper articles, books, and sometimes even scientific journals increasingly tells a tale of two brains, and the result is more often than not a validation of the status quo. Women, it seems, are just too intuitive for math; men too focused for housework.

Drawing on the latest research in neuroscience and psychology, Cordelia Fine debunks the myth of hardwired differences between men’s and women’s brains, unraveling the evidence behind such claims as men’s brains aren’t wired for empathy and women’s brains aren’t made to fix cars. She then goes one step further, offering a very different explanation of the dissimilarities between men’s and women’s behavior. Instead of a “male brain” and a “female brain,” Fine gives us a glimpse of plastic, mutable minds that are continuously influenced by cultural assumptions about gender.

Passionately argued and unfailingly astute, Delusions of Gender provides us with a much-needed corrective to the belief that men’s and women’s brains are intrinsically different—a belief that, as Fine shows with insight and humor, all too often works to the detriment of ourselves and our society.

This recommendation comes directly from Nymeth of things mean a lot, who wants to hand this out to everyone she meets. Debunking new science that just affirms tired gender stereotypes sounds like a good time, and if Nymeth likes it, you bet you should read it. (She has impeccable taste.)

You can read her sparkling review here, which is an interesting read in and of itself. Katherine Bouton, writing for The New York Times, found it well-written and well-armed against its critics—she points out that sometimes Fine just lets her opposite numbers speak their mind and reveal their own neurosexism.

3 thoughts on “The Literary Horizon: Between XX and XY, Delusions of Gender”