Over the year and a half (I don’t want to say years yet), you may have gathered that, while I have a wildly eclectic taste in books, I don’t talk about romance novels much. Perhaps you may have concluded that I don’t like romance novels. However, this isn’t the case. I like romance novels, but there’s usually so many problematic elements raised from assumptions of heteronormativity and depictions of supposedly healthy relationships that I usually dispense with the genre unless someone recommends some to me. All of this is to say that we’re going to look at two romance novels on my reading list—both of which are historical novels.

A Tapestry of Dreams by Roberta Gellis 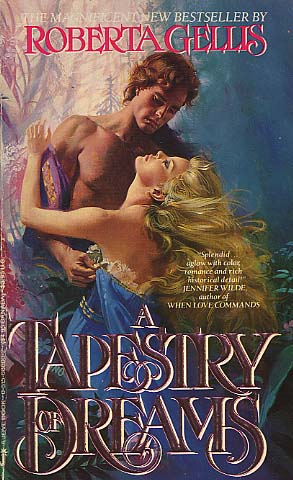 In the name of peace, Lady Audris locked away her dreams of a passionate love, until Hugh Licorne, the only man in England strong enough to defend her from her enemies, claimed her as his own.

Wow. Check out that cover. (Also, is it just me or does “Hugh Licorne” sound like a failed dirty joke?) But its delightful dated nature aside, I believe this is one of the few romance recommendations I picked up from Book Lust and More Book Lust. Even the most tired story can feel new with fresh and interesting characters, and a woman who actually tries to do the right thing when it comes to love in a historical setting sounds fresh and interesting to me.

Ana T. at Aneca’s World enjoyed it, pointing out that Audris and Hugh actually communicate to each other—most of the conflict is outside drama. (Yay!) The review in Publishers Weekly characterizes it as “perfect for readers who like an extra dose of history in their romance“.

A Tapestry of Dreams was published on June 1, 1985. It is currently out-of-print, but will be reissued on May 1.

A Tailor-Made Bride by Karen Witemeyer 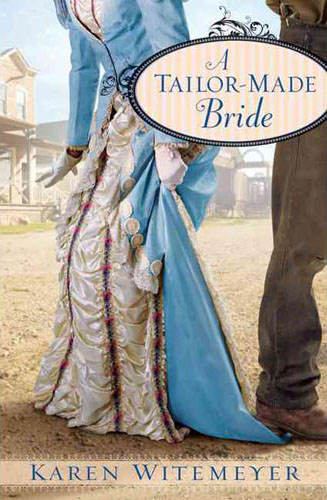 When a dressmaker who values beauty tangles with a liveryman who condemns vanity, the sparks begin to fly! Jericho “J.T.” Tucker wants nothing to do with the new dressmaker in Coventry, Texas. He’s all too familiar with her kind–shallow women more devoted to fashion than true beauty. Yet, except for her well-tailored clothes, this seamstress is not at all what he expected. Hannah Richards is confounded by the man who runs the livery. The unsmiling fellow riles her with his arrogant assumptions and gruff manner, while at the same time stirring her heart with unexpected acts of kindness. Which side of Jericho Tucker reflects the real man? When Hannah decides to help Jericho’s sister catch a beau–leading to consequences neither could have foreseen–will Jericho and Hannah find a way to bridge the gap between them?

A Tailor-Made Bride caught my attention when it was reviewed in Publishers Weekly—the premise sounded cute, and an exploration of beauty versus vanity sounds like an interesting anchor for what otherwise might be a fluffy romance. And, to be totally, honest, it sounds like good, clean fun.

Kim at Window To My World thoroughly enjoyed it, pointing out Hannah’s viewpoint and the pride of the two main characters. (Yay, butting heads because we can’t talk about our feelings!) But Becky at Becky’s Book Reviews had doubts about the villain, whose birthmark causes him to be ostracized by both the community and the main characters.

4 thoughts on “The Literary Horizon: A Tapestry of Dreams, A Tailor-Made Bride”