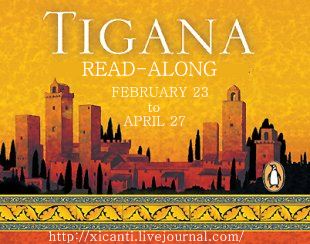 Of course she knew why Brandin needed to stay here in the Palm, why he needed to use his sorcery to prolong his life here in what was surely a place of exile for him in a hand of grief.

And with this post, I ought to be all caught up! I’ll be able to finish up Tigana this week and write up these posts at my leisure, along with the review at the end. I’m so glad—I’ll be able to fully participate now. Yay for a bimonthly read-along schedule! Let’s dig into the second part of Tigana, “Dianora”. Spoilers abound!

“Dianora” differs from “A Blade in the Soul” because it focuses solely on one character, Dianora di Certando, secretly Dianora di Tigana, a Tiganese survivor who has spent years getting herself close to Brandin of Ygrath, one of the conquerors currently entrenched in the Palm. Dianora’s aim is to kill him, but she’s forced to examine her motives and the path that led her here when she saves the man she’s trying to kill from an assassin.

Faced with the destruction of her city, her province (I think the Palm was divided into nation-states before getting conquered twice over), her parents, and her beloved brother, Dianora sets out to construct an alternate identity for herself almost solely based on sexuality—she laughs, she drinks too much, she’s gorgeous, and she tells great stories. Forced to live as a prostitute for a few years, some of her clients are so taken with her that they propose marriage. Like Tomasso, Dianora creates a mask for herself to gain power—one that she occasionally slips into too easily. While Tomasso’s mask is based on crude gay stereotypes (I’m still not over penis canes, guys), Dianora’s mask is based on beauty and sex appeal. Over dinner, Dianora observes to Brandin that “one of the measures of difference between men and women was that power made men attractive, but when a woman had power that merely made it attractive to praise her beauty” (159).

During the court audience that makes up most of this section, Kay draws an interesting parallel between Brandin, Dianora, and Solores, the other most powerful woman in the harem, and the three deities followed in the Palm—Adeon, Morian, and Eanna. Brandin, naturally, is the god who is sacrificed each year; he’s actually in secret training (given his age) for a religious ritual men in Chiara perform each spring. Solores is Eanna, the creator goddess and light-giver—her name is “Solores”, for Pete’s sake—and Dianora is Morian, the goddess whose jurisdiction also includes death. It’s an interesting parallel; all three are as powerful as they can be, but Dianora and Solores are powerful because of their beauty and sexual appeal to Brandin, not because of physical force and sorcery.

It’s an interesting exploration, especially with Dianora, who is hyper-aware of her mask and who she is beneath it. I am looking forward to seeing more of the religiously powerful women we encountered in “A Blade in the Soul”, however.

Kay takes the family and community presented in “A Blade in the Soul” and twists them with the revelation that Dianora committed incest with her brother for six months. This act makes concrete the connection between family and community in much the same way that the Winklevoss twins in The Social Network were the ultimate expression of an exclusive group that Zuckerberg could never get into. (Without the incest, obviously.) It’s his leaving that spurs Dianora onto her long-term plan. In fact, early in “Dianora”, she imagines restoring Tigana and her brother hearing about it in some faraway land—his approval is important to her.

But her rescue of Brandin from the assassin calls her loyalties into question and forces her make a choice between the pampered, if fragile, life she lives now and her teenage ideals. Dianora ultimately chooses Tigana—I think—but it does call into question the community she’s created in the harem with the eunuchs, one of whom is her most trusted friend.

That’s it for “Dianora”—check back here on March 23rd for my thoughts on “Ember to Ember”.