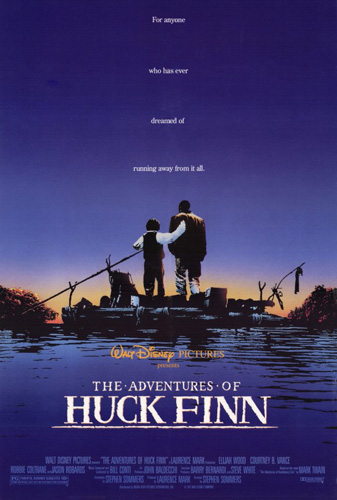 In a fit of concern for Elijah Wood’s career, my friend Natalya and I stumbled across the 1993 Disney film The Adventures of Huck Finn. And I would be absolutely lying to say if our viewing of this film did not include plenty of cackling about how this was a depiction of Frodo’s childhood, complete with jokes about running from Big Folk and not wearing shoes. The future star-studded cast is also a source of hilarity; it includes Robbie Coltrane, Anne Heche, and a young Laura Bell Bundy. But I have to admit, I was pleasantly surprised by it.

The Adventures of Huck Finn is set in the mid-1800s and follows one Huckleberry Finn, a young ruffian who has been adopted by the Widow Douglas and her sister, Miss Watson, who attempt to civilize him. When Huck’s abusive drunk of a father rolls into town and takes Huck in order to get at his son’s inheritance, Huck decides to fake his own death and runs away from home. In his flight, however, he encounters Jim, a friend of his and slave of Miss Watson, who is also running away. While Huck initially decides to turn Jim in, their adventures on the Mississippi teach Huck to question the world around him and about the power of friendship.

Despite Elijah Wood’s success as a child actor, I’d never really seen him as a child in anything before, so I was quite impressed with his work here. His mischievous Huck is natural and organic, a kid who starts off selfish and begins to realize that there are other people in this world to care about and look after. (I can only imagine the delight the young Wood took in discovering Huck gets to curse.) Courtney B. Vance (whom you probably last saw in Flash Forward) is a solid Jim, an average and usually upbeat guy trying to escape slavery and make a better life for his family. The friendship of Jim and Huck is key to any adaptation of The Adventures of Huck Finn, and Wood and Vance really sell it—their chemistry is organic and they play off each other well; there’s a sweet moment where Jim and Huck discuss the existence of French and end up play sword-fighting on the raft. The rest of the cast is equally solid; Ron Perlman is terrifying as Pap Finn, Robbie Coltrane and Jason Robards are wonderfully despicable as the Duke and the King, while Anne Heche and a young Laura Bell Bundy are lovely as the Wilkes sisters with dialogue. (Bundy’s scrunched up suspicious face made me crack up, mostly because she never changes her expression.)

The adaptation from the book is fairly liberal—Tom Sawyer, in fact, is never even referenced, so the ending has to be changed. But, for the most part, it stays true to the spirit of the book, focusing on friendship and the evils of slavery, including the hypocrisy of a civilized slave-based society. The rewritten ending is downright harrowing; my friends and I had no idea how it was going to end for a moment, but things tie up nicely and its final moments are taken from the book. I’ve mentioned before in other reviews (usually of other Disney properties!) the difference between something meant for kids and something suitable for all ages, and The Adventures of Huck Finn is firmly in the latter category. It doesn’t talks down to its audience, dealing frankly with slavery, racism, and child abuse—as Perlman (and, to be far, most of the cast) can pick up the young Wood with one hand, the threat is very real—no wonder Huck has to live by his wits. The cinematography is quite nice; according to IMDb, no digital effects or even sound stages were used on this film, which makes it a visual improvement over other Disney live-action pictures. (Although Wood’s hair is a little ‘90s, but we can blame the Widow Douglas, can’t we?)

But I think the best part of The Adventures of Huck Finn is that it never pretends to be anything it’s not—it’s a solid, though not amazing, period film about friendship and adventure. The suitable score never demands you to see moments as bigger as they are (as some films do—I’m looking at you, 1988 The Lion, the Witch, and the Wardrobe), and everyone seems to be having fun without undermining the more serious moments. Since my main experience with live-action Disney flicks of the early ‘90s is The Three Musketeers, this was a nice and pleasant surprise. And it came with The Lord of the Rings jokes on top; what more can I ask for?

Bottom line: The Adventures of Huck Finn is a nicely unpretentious liberal adaptation of The Adventures of Huckleberry Finn with a fun cast (including a young Elijah Wood as Huck and Courtney B. Vance as Jim). It’s a solid little film, and it comes with the added hindsight bonus of all the hobbit jokes you can crack. Worth a watch.

I bought this VHS tape from a thrift store.