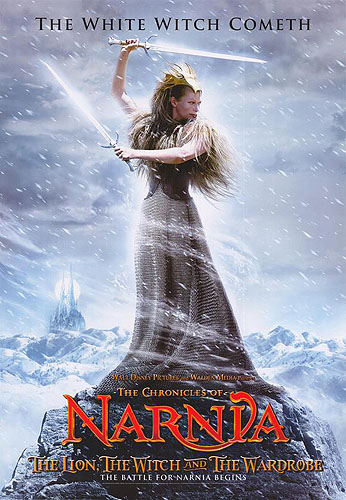 The Chronicles of Narnia is a franchise born out of panic; with the success of The Lord of the Rings and Harry Potter, Walden Media acquired the rights to a property that contained elements of both—British children traveling on a train to somewhere mystical, complete with an association to Tolkien through Lewis. I’m not saying that Lewis’s books wouldn’t have been adapted independent of The Lord of the Rings and Harry Potter film franchises, but it’s quite clear that the Walden Media adaptations are a reaction to both film series. The Lion, the Witch, and the Wardrobe was filmed in New Zealand, for crying out loud, and WETA Workshop was called in. (And let’s not even mention the Extended Edition, which adds a whole eight minutes to the film.) All this being said, I do enjoy these films, although, as my friend Natalya puts it, it’s a bit excessive.

The Lion, the Witch, and the Wardrobe follows the four Pevensie children, Peter, Susan, Edmund, and Lucy, as they are relocated from London to the country mansion of a kindly professor during World War II. Playing hide and seek in their new home, Lucy hides herself in a wardrobe and discovers a magical country known as Narnia, a once peaceful and beautiful place now ruled by the White Witch and covered in eternal winter, and makes friends with the faun Mr. Tumnus. But when the Pevensies return to Narnia, Mr. Tumnus has been imprisoned by the White Witch, and the Pevensies’ efforts to save him turn into an effort to save Narnia itself—with the help of the mystical lion Aslan and without the help of their brother Edmund, who has been turned to the Witch’s service.

This production has done an impeccable job casting the kids—they not only play their characters well, but look and act like a cohesive family. (I’m especially fond of the choice to cast Susan and Edmund with similar coloring, perhaps as a way to foreshadow Susan’s fate in the books.) Georgie Henley makes for an adorable Lucy (I can’t believe she’s fifteen now!) , but also a Lucy full of inner strength. As I’ve mentioned, I really like the relationship between Peter and Lucy, and Peter Moseley and Georgie Henley have an affable and sweet sibling chemistry. Anna Popplewell makes a fine Susan, whose time in Narnia teaches her (as well as Edmund) that you don’t need to grow up all at once, a difficult lesson to take in wartime England. But I think Skandar Keynes (fantastic name, by the way) is the standout here. Edmund is a hard character to play, and he manages to be both insufferable and sympathetic, trying to do his best to make up for his mistakes after Jadis reveals her true colors. As the kids are the heart of the series, I can forgive a lot for such a fantastic cast of kids. The adults are uniformly good, but Tilda Swinton’s Jadis is phenomenal; cold, cruel, and manipulative. Her costumes certainly don’t hurt. But, I have to admit, I can’t deal with James McAvoy’s Mr. Tumnus. He’s too young, too attractive, and too human—his relationship with Lucy makes all the warning bells go off in my head. (Being shirtless the entire film does not help. At all.)

As an adaptation of the book, director Adamson takes several liberties, some of which work, some of which don’t. I like the ones that place the story more firmly in its historical context, such as the introductory bombing of London, the use of period music, and the Pevensies breaking a window while playing cricket, hence hiding in the Wardrobe. I don’t like the ones that try to up the epic quotient; in the moment, I enjoy them (“Look! Tilda Swinton has two swords! Cool!”), but it’s too much of a liberty. Adamson has said that he remembered a big battle at the end of The Lion, the Witch, and the Wardrobe, which is why he put one in, but I find that a little flippant. I like the moment where Susan and Lucy, after spending all night with Aslan, suddenly see Peter and the army getting decimated. It just seems like a ploy to show a big battle from start to finish rather than focus on Lucy and Aslan. There’s also a handful of little things that have been fudged to be more similar to The Lord of the Rings; Peter and Edmund known of Aslan’s death, giving the battle a desperate last stand feel (gee, I wonder where I’ve seen that before), Edmund and Tumnus talk in prison, and Cair Paravel is a cliff fortress. What I like about the films is that, at their best, they maximize the unique flavor of Narnia (it’s a fantasy series about getting to know Jesus set in the 1940s and a magical land!) while minimizing and even erasing some of the problematic elements (women are involved with war and Edmund is made more complex); when they pull stuff like this, it just seems like it’s trying too hard when I already like it for what it is.

Bottom line: The Lion, the Witch, and the Wardrobe boasts a fantastic cast, especially for the Pevensies, and does well when it’s putting the story further into its historical context—but it occasionally feels like it’s trying too hard to be Peter Jackson’s The Lord of the Rings, which is a shame; the film, at its best, manages to capture the unique flavor of Narnia while minimizing the problematic aspects of the book.

I bought this DVD from a thrift store.