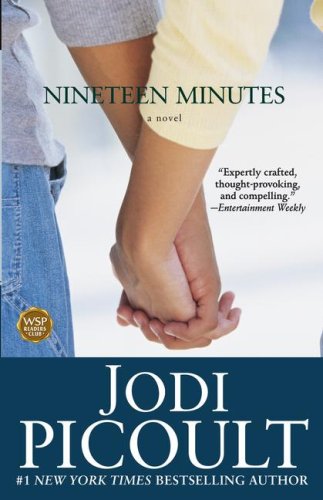 I used to read a lot of Jodi Picoult in high school—so much so that, when I graduated, the library donated a Jodi Picoult book to the library in my name. (To be fair, they did this for every senior in the book club.) But after a while, I just started getting tired of them. You see, Picoult has a formula or, at the very least, several elements that she constantly uses. The story is usually ripped from the headlines, one of the characters is a woman in a legal profession who is focused on her career (to the detriment of her love life and/or family life), there’s a court case, and, in families containing a main character and more than one child, one child is valued above the other. At some point, it feels less like a story that needed to be told and more like going through the motions. Still, I’d always wanted to read Nineteen Minutes—as it’s about a school shooting, it wasn’t available at my high school library. So I picked it up to clear out my head after A Clash of Kings.

Nineteen Minutes takes place in Sterling, New Hampshire, a small town where a school shooting has occurred. The perpetrator, Peter Houghton, is in police custody, a force that includes detective Patrick Ducharme. His parents, Lacy and Lewis, who have already lost one son, are devastated, wondering if it was something they did. Superior court judge Alex Cormier is expected to preside over the court proceedings, but she may be conflicted, as her daughter, Josie, was a student and a witness of the shooting. As Peter’s defense attorney, Jordan McAfee scrambles to put together a defense based on not what Peter did—as it’s heavily documented—and focuses on trying to explain why Peter did what he did; a heavy question in the mind of every parent and child in Sterling.

Picoult’s writing style is extremely readable. (I recall managing to whip through one of her novels in a day during high school.) It’s clear and direct, with little (though present) imagery. Her famously thorough research shows here, from the legal scenes to the motives to the in and outs of high school. The structure is solid, pivoting around the actual event and jumping before and after to show us the events leading up to and the aftermath of the shooting. The characters are well-rendered and distinctive. Technically, it’s quite a good novel, methodically checking off everything a novel needs to be, well, a proper novel. (Incidentally, this is the sort of thing that nets you three stars in my rating system—a novel doing its job properly.)

But it rings hollow. Already familiar with Picoult’s formula, I knew Cormier and Ducharme were going to get together as soon as humanly possible, there would be a hopeful ending, and well-rendered jail scenes. Familiar with popular culture, I knew the supposedly surprise twist as soon as Josie’s boyfriend revealed himself to be an despicable human being. While the characters do have organic motivations, the execution is off. For instance, one of the things that pushed Peter over the edge was that he, unlike other children bullied at Sterling High, did not have a supportive family that valued him. Good and logical enough, right? In one scene, Peter’s kindergarten teacher talks to Lacy about the bullying and is very realistic about the fact that Peter is going to have to either fit in or stand up to his bullies. Lacy turns out and tells Peter—a five-year-old child, mind you!—that if he doesn’t stand up to his bullies (who are older and larger than he is), he will be grounded and kept from seeing his only friend. What. Right thing to do, wrong way to do it. It’s this sort of thing that dogs the novel, a logical misstep that keeps you from identifying with and embracing these characters—while they’re well-rendered (I particularly Jordan McAfee, Peter’s delightful shark of a defense attorney), you get the feeling that, at their core, they’re automatons who could never surprise their writer and, thus, her readers. (I suppose this explains the lack of a Picoult fandom…)

I can see the appeal in this—it doesn’t demand much from you, which I sorely needed after A Clash of Kings, while never exactly talking down to you (though it likes to spell out subtle emotional moments). But it almost slides off your memory once you close it, easily forgotten. Franz Kafka once said, “I think we ought to read only the kind of books that wound and stab us.” I like that image, doing battle with a text and, later, proudly displaying the wounds—the moments, the language, the power—that stay with you, scarred into your memory and popping up when you least expect it, now part of you forever. Picoult’s work could never land a hit, much less wield a sword.

Bottom line: While Jodi Picoult’s Nineteen Minutes is a good technical novel (extremely readable, well-researched, good characters, and a solid structure), it rings hollow—these aren’t characters who could ever surprise their writer, much less her audience. While there is something comforting about a novel not demanding too much from you, it slides off the brain as soon as you close the book. If you must.