As December comes to a close and Christmas rolls around, I’m feeling downright cheerful about winter—and I’m a cold-blooded person, so I usually don’t care for the weather. But I’m almost excited about the prospect that it might snow on Christmas here in Georgia. To celebrate that unique feeling of winter, today I’m going to feature two speculative titles that thematically deal with winter and coldness—and it doesn’t hurt that they both have female leads! 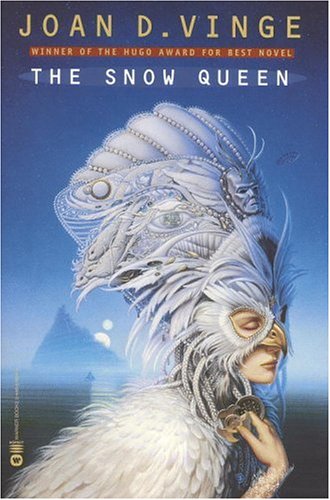 As the end of her third lifetime draws near, Arienrhod, the ancient ruler of far Tiamat, clones several heirs, and seeds them on different islands throughout her sea-dark world.

The Snow Queen came to my attention when Josh Wimmer featured it on io9 a little while ago; to put it crudely, it can be seen as a feminist answer to Star Wars while the original trilogy was still incomplete. (Nobody even knew Darth Vader was Luke’s father yet! A world beyond my comprehension, like a world before The Lion King.) It even won the Hugo in 1981, but sadly, it appears to be out of print—Amazon has no listing for it beyond third-party sellers pedaling new and used copies. Which strikes me as odd, since The Snow Queen is part of a series; The Summer Queen and Tangled Up in Blue are novels set in the same world. Luckily, my library has it, but look at that gorgeous cover! I want to own that.

Steven Wu at Steven Wu’s Book Reviews found the worldbuilding impressive, but everything else a bit lackluster—a sentiment echoed by Russ Allbery at Eagle. Perhaps the worldbuilding and parallels to Star Wars will keep me distracted from the lackluster bits.

The Snow Queen was published in 1980.

From one of the genre’s finest writers comes a bold new epic fantasy in which science and magic are locked in a deadly struggle.

It is the dawn of a new age… The Industrial Revolution has begun, factories are springing up across the country, and new technologies are transforming in the cities. But the old ways do not die easy.

Cat and Bee are part of this revolution. Young women at college, learning of the science that will shape their future and ignorant of the magics that rule their families. But all of that will change when the Cold Mages come for Cat. New dangers lurk around every corner and hidden threats menace her every move. If blood can’t be trusted, who can you trust?

Cold Magic caught my eye because the phrase “Arctic steampunk” springs to mind when I think about it, which, in return, reminds me of some key passages in His Dark Materials, a series I quite enjoyed. I haven’t read enough steampunk to see it deal with the growing pains of the Industrial Revolution, so I quite look forward to that—and, of course, the eternal battle between science and magic.

Jia at Dear Author points out Eliott’s apparently amazing worldbuilding; there’s a very large helping of alternate history even before we get to the steampunk, and she loved the two female leads. Lexie at Poisoned Rationality points out the same things, as well as the earnest friendship between the two girls that feels real and refreshing.

Cold Magic was released on September 9.

5 thoughts on “The Literary Horizon: The Snow Queen, Cold Magic”