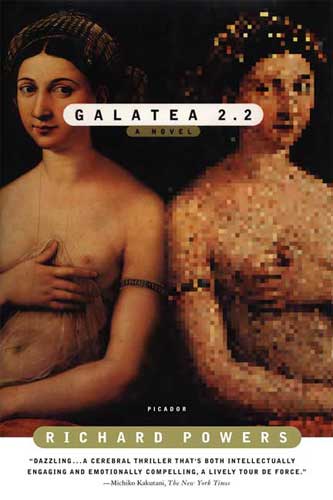 One of the joys of reading is being surprised by a book, such as the experience of reading Fingersmith for the first time. (Remember, every time you spoil that book, another YA paranormal romance franchise pops up.) Galatea 2.2. came to me by way of Nancy Pearl’s Book Lust, and it was advertised as a science fiction retelling of the myth of Pygmalion. As soon as I opened up my library’s crooked copy of Galatea 2.2, however, I realized it was something much different–and equally enjoyable as anything I’d been looking forward to.

Galatea 2.2 follows a fictionalized version of the author as he returns home to the United States from the Netherlands after the end of a ten-year relationship with a former student, known only as C. He takes up the position of Writer-in-Residence at his alma mater, whose computer science department is massive, perhaps in response to the end of the millennium. Dragging his feet about writing his next novel, Powers makes friends in the computer science department, especially Philip Lentz, an abrasive genius who traps Powers into helping him with an insane bet–in a year, they will build a machine that can pass a comprehensive exam in English, as tested against a flesh-and-blood human. As Powers helps Lentz, he reflects on his own past, the nature of knowledge, and the human condition.

Like many novels that are classified as “literary fiction” (a phrase I loathe with the power of a thousand suns), Powers has a very poetic style with an eye for detail–but he lacks the optimism and warmth of, say, Michael Chabon. Powers’ world is where technology and literature meet. My notes read “Sebastian style”, which means that it reminded me a bit of Sebastian Flyte from Brideshead Revisited; wry, sharp, but always with an undercurrent of sadness to the proceedings. While Galatea 2.2 is definitely set in the 1990s, there’s a dystopian vibe to the whole proceedings. This doesn’t mean that it’s unrelentingly sad–the wryness lightens it up a bit, and there’s some bright moments when Powers reflects on his life with C. in the Netherlands. The ending is, against all odds, hopeful, with a twist as neat as a magician’s trick. But it’s not a warm and fuzzy book; Powers occasionally reaches for grotesque and depressing imagery.

I was utterly fascinated by the fact that this is a pseudo-autobiographical novel. I kept myself from looking up Richard Powers on Wikipedia so I could continue trying to figure out what was real and what was not. I didn’t even realize it until I checked the little biography on the back flap and realized that the real Powers’ first book was also the fictional Powers’ first book. This blurring of reality and fiction is quite interesting, although I do wish he’d done more with it. It can be unsettling at times; Powers gets very personal about his own faults, but the ambiguity keeps the reader from deciding one way or another. Part of the reason it took me a week to finish Galatea 2.2 is because it’s less of a plotted novel then a pseudo-autobiography with a conceit to allow Powers to hold forth on human consciousness. If you are looking for a science fiction retelling of Pygmalion, this isn’t it–while Powers is certainly training Helen and he occasionally ponders on the three women in his life (C., Helen, and A., her competition), it’s never developed more than that. I’m unsure why it’s advertised as such.

The technological jargon is well-done–according to Galatea 2.2 and backed up by his Wikipedia page, Powers has worked as a computer programmer. While it gets pretty thick towards the end, Powers the character, as a man devoted to writing despite his crippling writer’s block, breaks it down for the reader well. The focus isn’t the technological jargon, of course, but the miracle of Helen, a well-earned machine (Powers and Lentz go through seven versions of their computer before Helen) discovering the world backwards, language-first. If Galatea 2.2 wasn’t enrobed in Powers’ pseudo-autobiography and interesting, if cold, style, and focused more on Helen, then it would be a fairly predictable story–machine gains consciousness, looks at the human world, and decides it isn’t worth it. But Powers plays with it quite well. It’s an odd novel, but it is interesting.

Bottom line: I haven’t a clue why this is advertised as a retelling of Pygmalion–instead, Galatea 2.2 is a sharp but cold pseudo-autobiography of author Richard Powers, with the conceit of teaching a machine literary analysis to allow Powers to hold forth on love, literature, and other important things. An interesting, if odd, read.