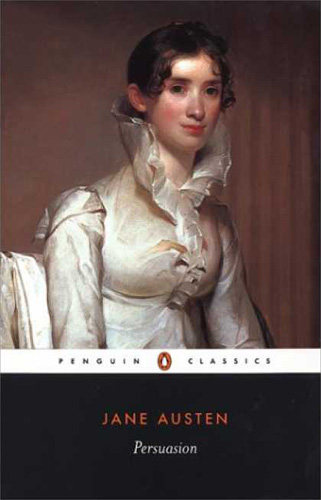 I’m really going to miss my Jane Austen class, I’ve got to say–although I’m certainly looking forward to my young adult and children’s literature class next semester. (Why yes, my school is awesome.) While even I, chin deep in mass paperback fantasy, had heard of Mansfield Park, I had never heard of Persuasion. My only acquaintance with it was encountering the DVD of the film adaptation while poking through my local Blockbuster, trying to find a copy of Star Wars Lucas hasn’t messed with. (A Herculean task, I assure you–ancient VHS tapes are my only recourse, but I digress.) Still, it was a calming 250 pages compared to Emma, and I picked it up with relief.

Persuasion follows Anne Elliot, the daughter of a very self-absorbed, classist, and recently impoverished baronet. In order to make up the lost money, Sir Walter Elliot reluctantly rents out Kellynch Hall to Admiral and Mrs. Croft and replaces to Bath with Anne’s eldest sister, Elizabeth. Anne remains behind with her youngest sister, now a Mrs. Musgrove, and discovers that Mrs. Croft’s brother is Captain Frederick Wentworth–a man she once was engaged to, when his fortunes were yet to be made, and which engagement she broke off at the suggestion of her friend and mentor, Lady Russell. Now twenty-seven and still unmarried, Anne is unsure how to deal with the reappearance of a man she still might love.

After getting through Mansfield Park and Emma, Persuasion felt a bit… spare. It’s a very simple and straightforward story; Anne deals with the downturn in family fortunes and deals with the reappearance of Captain Wentworth. The focus is on the Elliot family, albeit spread out into the Musgroves, whom Anne’s younger sister, Mary, married into. It’s very clean and enjoyable, but it still feels a bit skeletal– perhaps I feel this way because I’m reading these in the order Austen wrote them, and it’s hard to see her backtrack, in a sense, to the cleaner plots of Pride and Prejudice and Northanger Abbey. I did like that Persuasion focused on Anne, a quiet but bright “older woman” (by Regency standards, naturally) who is moderate in her spending but unfortunately ignored by her family. In this class, we were asked to write some thoughts down that could, hopefully, turn into a paper; I wrote about Anne’s fascination with the Navy, which neatly mirrors the involvement of the Navy in Austen’s own life–two of her brothers were in it. Even as Anne remains unsure of Wentworth’s intentions, she finds nautical people who like and appreciate her–Captain Benwick, whom she recommends some hearty prose to lift him out of his poetic doldrums, and especially both of the Crofts. While I was very pleased that Lady Russell was never vilified (in fact, Anne boldly defends her earlier decision to Wentworth), I was also pleased that Sophia was presented as the sort of woman Anne wanted to be.

In fact, the lack of vilification of Lady Russell can perhaps explain the slow, sauntering pace of Persuasion; there’s no antagonist to provide the stakes that Anne, as a baronet’s daughter with, if not wealth, security, lacks. While Austen’s books are hardly page turners, they’re still quite engaging because there are stakes involved for these young women, even Emma, who, instead of securing herself a place in the world, needs to secure her head out of the romantic clouds. Anne doesn’t particularly grow over the novel; she’s always made her wants and desires clear, it’s just that her father and sister completely ignore her. (In one of the meanest scenes, Elizabeth confides to a Mrs. Clay, a woman clearly angling for Sir Walter’s hand in marriage, that she values her more than her own sister–which, of course, Anne overhears with perfect clarity.) She simply finally gets her chance to shine, by marrying Wentworth (like that was ever in question!) and becoming a sailor’s wife. She’s constantly useful and rational throughout the novel; a lovely character and ideal woman, but not the most engaging of Austen’s heroines. (Perhaps that’s why you rarely hear of Anne Elliot in popular culture, as opposed to sarcastic Elizabeth or controlling Emma.)

But unlike Austen’s other novels, which usually reaffirm a fairly conservative view of class (especially in Persuasion’s sister books, Mansfield Park and Emma), Austen takes some swipes at the old money families she’s been idolizing. Sir Walter and Margaret are arrogant, if elegant, snobs, who trip over their own feet trying to please the exceedingly dull Lady Dalrymple and are confused when Anne won’t break off a date with an impoverished and very ill schoolfriend to have dinner with them; even William Elliot, a cousin proposed as a romantic match for Anne (and thankfully turned down, as he turns out to be quite the rogue), teasingly reminds Anne of the difference between the good company (the Dalrymples) and the best company (lively, modest banter). I did quite enjoy the emphasis on the Navy and the self-made man in Persuasion, but between the low stakes and the fairly static Anne, it doesn’t stand up to the rest of Austen’s canon–which is quite a shame, as Austen died a year after completing this.

Bottom line: Austen’s last novel makes romantic confusion stand in for conflict for Anne Elliot, the baronet’s daughter who identifies much more with sailors and their wives. Anne, as the oldest Austen heroine, is nicely bright and quiet (although she does stand up for herself), but her character remains mostly static through the novel, and there’s no particular need for her to get married to secure herself in society, which makes for a slow story. Austen’s last was not her best, although it’s still worth a read.

I bought this book from Barnes & Noble.