Tangled
based on “Rapunzel” by the Brothers Grimm 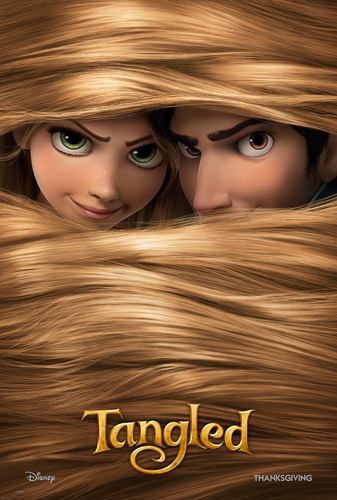 As you may have gathered, I am a Disney freak. I was reared on the darker Disney films–The Lion King, The Hunchback of Notre Dame, and Pocahontas. So believe me when I say I’ve been waiting a long time for Tangled; roughly four years, through two wildly different scripts (Rapunzel Unbraided!), different voice casts (Cheno!), and different designs (Regency!). I was even concerned that I’d overhyped myself, which I’ve certainly done before. But I was the over the moon to discover that I hadn’t. Now, let’s see if I can’t walk that fine line between fannish glee and analytical thinking…

Tangled starts once upon a time on an island kingdom. When the pregnant Queen falls deathly ill, the people of the kingdom seek a magical flower that can heal even the worst wounds. Unfortunately, it’s being abused by Gothel, a vain woman who uses its magic to keep eternally young. When the flower is discovered, the Queen is healed and gives birth to a beautiful baby girl, Rapunzel. But when Gothel discovers that the magic of the flower is kept in the baby’s hair, she kidnaps the child and raises it as her own, telling her that the outside world is full of horrors. Eighteen years later, Rapunzel dreams of getting out of her tower in order to see the lanterns that appear in the sky every year on her birthday for herself. When a passing thief, Flynn Rider, takes refuge in her tower, she makes him her reluctant guide–but there’s much more than just lanterns out there for Rapunzel and Flynn.

Where do I start? This is a beautiful film. The digital animation was overseen by Glen Keane, the fine gentleman who did character animation for The Little Mermaid, Aladdin, and Beauty and the Beast. If you’re wondering why Rapunzel bears a passing resemblance to Ariel, that would be why. And it’s really quite impressive–it manages to blend together the warmth of 2D animation with the more delicate things digital animation can do, such as Rapunzel’s beautiful hair and her freckles (which would be a nightmare to animate traditionally, let me tell you). The best example of this is Rapunzel’s parents, two characters who never speak a single word, but whose struggle and characterization is apparent through their animation. It’s also just a lush film; there’s several wide shots of her tower that are just breathtaking, particularly one where her hair floats in the summer breeze, emphasizing her isolation and her desire to get out. Considering the years it’s been in development, I would really expect nothing less–there’s thought in every frame, which any creative work should have.

I have always liked Flynn for clearly being the son of Tulio from The Road to El Dorado for years, but Rapunzel herself is fantastic. With her underbite and a goofiness that never takes away from her dignity, she’s thoroughly endearing. She’s spent her captivity teaching herself all sorts of useful skills, including beating people up with frying pans. She’s sweet and a bit naïve, but extremely capable–when Flynn, trying to lose her, takes her to a pub and ends up in a very unbalanced fight, Rapunzel leaps to his rescue without a second thought. And then she charms them all into a musical number. She and the very funny Flynn play off each other well, especially since Flynn is (initially) such a worldly, slick charmer–who has little to no effect on Rapunzel. She only starts to like him romantically after a near-death experience, when he begins to open up to her. I love their relationship; I’ll say little else for fear of spoiling, but they’re perfect together. Gothel, as the main villain, is fascinating–a brassy, vivacious woman who can turn cold and deadly on the spot, especially as she gets more desperate towards the end of the film. Her villain song, “Mother Knows Best”, is not only a great song, but it’s fantastically staged, too.

I have to admit, The Hunchback of Notre Dame is my favorite Menken score, but Tangled’s is fun. Like many a Menken film, the songs tend to vacate the premises in the second art, which certainly happens here. Rapunzel’s cheerful “When Will My Life Begin?” lightens the mood after a fairly dark prologue, and “I’ve Got a Dream”, the musical number with the pub thugs, is hilarious–even if Menken playfully considers it to be “one of the dumbest songs I’ve done in my life”. The musical inspiration here is folk rock, which is really apparent in the fairly subdued love duet, “I See the Light”. (Also, Zachary Levi can really sing. Wow.) I was also over the moon that Tangled avoids the power dynamic pitfalls some Disney princesses fall into–Rapunzel and Flynn are always on equal terms, as are her parents (despite the lack of dialogue for them, it’s apparent that the Queen is her husband’s rock), there’s no teenage wedding (Ariel!), and I don’t think it’s really a spoiler to say that the film makes it explicit that Rapunzel will one day be Queen, thus outranking all the Disney Princesses. All in all, it’s tons of fun.

I really could go on and on, but that’s what fandom is for, really. I will restrain myself to pointing out one Easter egg–the pub thug that’s sent to go fetch the guards? He’s an early design for Flynn; they’re even wearing the same colors. Ha!

Bottom line: After all those years in development, you’d hope Tangled is amazing–and it is. The animation is stunning, marrying the best of 2D animation with the efficiency and vastness of digital animation, the music is solid (though it could be better), and the characters are fantastic–Rapunzel and Flynn are a fantastic couple, and Mother Gothel is a refreshing villainess. If you love Golden Age Disney, musicals, or just want to feel all warm and fuzzy, I can’t recommend it enough.

I saw this movie in theaters.