While I’m glad I’m making more of an effort to showcase other genres on The Literary Horizon, I won’t lie–I’m always pleased as punch when I realize I can feature fantasy again. (The rule, if you haven’t been playing along at home, is that I can’t read or feature a genre twice in a row.) Today, we’re looking at two fantasy titles from the ’00s–one that’s technically historical supernatural fiction and one that’s solidly fantasy.

The Shadow of the Lion by Mercedes Lackey, Eric Flint, and Dave Freer 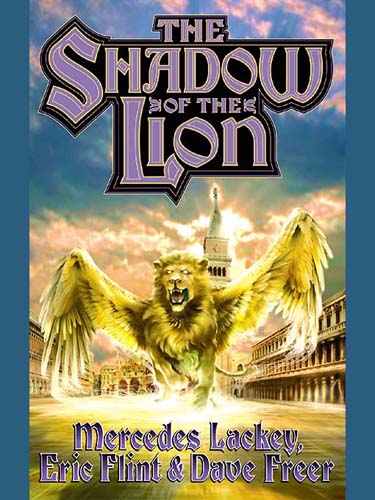 As the bronze statue of the great winged lion stares out across the Piazza San Marco, a failed magician must find courage. An orphaned outcast must find his strength. A reluctant prince must choose between duty and pleasure. All will be consumed by an evil greater than they have ever known.

The Shadow of the Lion has been recommended by many people as my introduction to Mercedes Lackey, including homophobic booksellers. (That’s not a selling point, merely an opportunity to retell a story.) I haven’t been dragging my feet about it, but it has sort of vanished at the book of my reading list. However, I recently discovered the Baen Free Library and was shocked to discover that The Shadow of Lion was available for free! So I’ll probably get around to it sooner than I might have otherwise.

Despite the fairly recent release date, I can’t dig up any book blogger reviews of The Shadow of the Lion–nor ones from other sources! So my little preview will have to consist solely of the Amazon reviews, where it holds a respective 3.5 stars–readers tend to enjoy it, but note how long it is and how dense the story can be. As someone reared on doorstopper fantasy, I’m not intimidated–but reading it on my computer might turn out interesting…

In a family torn apart by poverty and violence, Hekat is no more than an unwanted mouth to feed, worth only a few coins from a passing slave trader.

But Hekat was not born to be a slave. For her, a different path has been chosen.

It is a path that will take her from stinking back alleys to the house of her God, from blood-drenched battlefields to the glittering palaces of Mijak.

This is the story of Hekat, precious and beautiful.

I love prickly heroines; the pricklier the better (but there is a line between prickly and flat-out rude). Empress has been floating in my periphery for so long that I was shocked to discover it was published Stateside only two and a half years ago–it certainly felt like longer! While Karen Miller’s The Innocent Mage disappointed me (you need to put a whole novel in your, you know, novel), Empress appears to be solely the story of Hekat (who becomes the villain in The Riven Kingdom).

Trin at Realms of Speculative Fiction thinks Empress had potential, but found Hekat annoying and one-note after a while (to be fair, Trin also didn’t like Catelyn in A Game of Thrones, to help you gauge). Rob H. Bedford at sffworld.com had a similar reaction; while he enjoyed the first half to some degree, he found himself hating Hekat. This may sound like a book I ought to drop, but I’m interested in a trilogy that starts off with the story of the main villain. I still want to give Miller a chance; but I’m not hoping for much.

4 thoughts on “The Literary Horizon: The Shadow of the Lion, Empress”