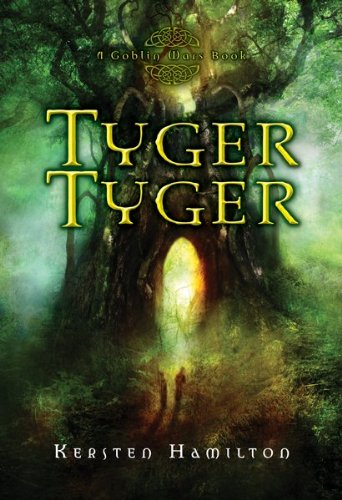 I have to admit, my initial perusal of NetGalley descended into childishly greedy glee pretty much immediately, although I did maintain some level of control–I requested Tyger Tyger because of Celia’s glowing review. After Sisters Red, I needed something restore my faith in young adult supernatural fiction. Tyger Tyger didn’t succeed, but it was a step in the right direction.

Tyger Tyger follows Teagan Wylltson, a science-minded teenage girl with a loving family–her librarian father, John, her musical little brother, Aiden, and her artistic mother, Aileen, who was adopted and raised by Irish Travelers. When Teagan’s “cousin”, Finn Mac Cumhaill, is found on the street, Social Services place him with the Wylltsons. But Finn brings with him the attention of goblins and other supernatural creatures bent on destroying him, since Finn is the Mac Cumhaill–the one chosen to fight goblins. When the goblins attack and kidnap her parents, the cousins join forces to go confront the Dark Man himself, the ruler of the goblins–Fear Doirich.

Tyger Tyger’s worldbuilding is, though bit shaky, quite refreshing. It uses Irish mythology very well and, surprisingly, reconciles with Christianity. A lot of supernatural fiction, young adult or not, tends to gloss over religion and how it might react to the supernatural, so it’s nice to see a family that prays together and the mythology taking into account Irish Christian lore, particularly the story of a one St. Patrick. Any infodumps are successfully presented as stories Aiden asks Finn for; Lynn Flewelling uses a similar tactic in Luck in the Shadows. But it can be shaky, as several of the enemies go down far too easily–the concept is there (one enemy, for instance, can control you–if he can speak), but the execution is weak (instead of choking him, they gag him). Part of this, I think, comes from the fact that Tyger Tyger is the first installment in The Goblin Wars, which is, of course, no excuse.

I enjoyed Teagan, a science type with ambition–she wants to go to Cornell, works hard at her internship, and has, quite reasonably, decided that she won’t have time to devote to romance with the busy schedule she keeps. Of course, Finn has to go and creep me out in his first appearance by promising to change that plan that doesn’t include romance, even though Teagan, despite noting her attraction to him, wants to set it aside. Despite that poor first impression, Finn grows on you–he’s a street-smart guy grabbling with his status as the Chosen One, who respects Teagan’s boundaries and focuses at the task on hand. While I’m still creeped out by the fact that they’re technically cousins, I was pleased to see a romance that didn’t derail the story or make characters make stupid choices. When Finn attempts to leave Teagan and Aiden behind to protect them, she points out that Aiden is the only one who knows where they’re going. Hamilton has written lots of middle-grade and younger novels, so it’s no surprise that Aiden is well-rendered, operating just like a little kid should. In fact, most of the cast are good, if briefly sketched–save for one glaring exception.

Teagan’s best friend, Abby, is annoying, arrogant, and unfunny. In fact, Abby represents Tyger Tyger’s identity crisis; it can’t decide if it wants to be a wacky and hip novel (with several references that will date poorly and plenty of juvenile humor) or a fairly serious supernatural adventure (where its unique atmosphere shines). Abby makes retorts and remarks only small children would find witty (such as the observation that literature is so called because “it litters your mind”), manages to turn her sexuality into a way to reaffirm heteronormativity in the most infuriating manner (she doesn’t respect Teagan’s decision to not date to the degree that she’s the first to propose a relationship with her technical cousin), and is, in general, dumb. She brings the novel to a screeching halt and makes the first half hard to get through. To be fair, there are pacing issues (the climax is so light and fluffy, it could be used as a dessert), but most of it is Abby and everything she represents–gender binaries, disrespect, and unfunny jokes. Once Abby mercifully disappears (she doesn’t get eaten by goblins; but a girl can dream, can’t she?), the novel comes into its own, but it takes a while to take off. There’s a lot of promise in Tyger Tyger, but there are problems, too.

Bottom line: Tyger Tyger can’t decide if it wants to be a wacky, hip novel (complete with instantly dated references and unfunny, juvenile humor) or a fairly serious supernatural adventure (where the main characters and the atmosphere shines). Most of this has to do with the main character’s wacky best friend, a truly infuriating and annoying character who slows down the first half of the novel with her unfunny antics. But once she leaves the picture (unfortunately, she’s not eaten by goblins), Tyger Tyger gets the chance to show off its interesting worldbuilding, spooky atmosphere, and good main characters. But it definitely has problems.