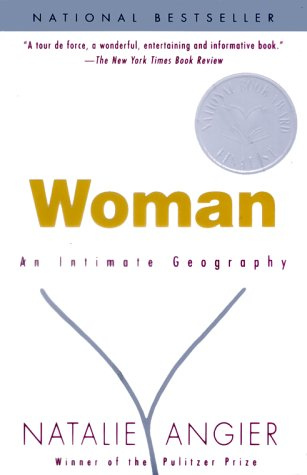 When I was a wee lass (which, in my case, means prior to fourteen), I found a copy of The Female Eunuch at the independent bookstore in my hometown. Being a budding feminist, I took to it like a duck to water, marveling over Greer’s work. In a way, Woman: An Intimate Geography reminds me of The Female Eunuch; both works go through the female body piece by piece and insert a female perspective into largely male-dominated science. There’s a bit in The Female Eunuch where Greer talks about how you can’t conclusively tell the sex of a skeleton, and Woman: An Intimate Geography takes that sort of thing and runs with it.

Woman: An Intimate Geography is exactly what it says on the tin. Natalie Angier, sick of evolutionary psychology that smugly presents its findings as confirmation of all the old gender stereotypes, takes a look at various parts of the female form, strips them down, and discusses new and interesting theories and findings that aren’t getting as much airtime as studies “proving” men want more sex. (As Angier eloquently puts it, ask men again after sex has just as many risks, physical and social, for them as it does for women.) Through this, Angier presents a very unique and scientific celebration of the female body.

In her introduction (entitled “Into the Light”, which reminds me of Scissor Sisters’ “Invisible Light”), Angier instantly endeared herself to me by taking a shot at Camille Paglia, a cultural critic who recently managed to insult asexuals while criticizing Lady Gaga. Angier’s writing style is very lyrical; lots of long sentences and metaphors. For the most part, it works brilliantly; after critiquing a scene in Jerry Maguire, Angier shrugs and wonders if perhaps she’s reading too much into fluffy entertainment–and then warns that too many sweets rot your teeth. However, it can occasionally feel a bit forced, especially during “Wolf Whistles and Hyena Smiles”, a chapter on testosterone and women–she talks about aggression in young girls and calls the media presentation of little girls “goo girls”, which just sounded off to me. But it’s worth powering through moments like that for some particularly beautiful language.

Angier digs through various scientific studies to bring us gem-like ideas that will change the way you view your body. The first six chapters, from human egg to hysterectomies, are downright powerful, from the first comparison of the human egg to the sun to women defending their right to have a hysterectomy from people who place too much emphasis on the uterus as the defining trait of a woman. In this way, it’s quite stunning. Angier makes sure to present different views, noting in her introduction that, while biased towards women, she wants to present several different striking ideas and theories. This is especially noticeable as we move away from biological fact (did you know male twins are more identical than female twins?) and towards social theory (why did women start outliving their reproductive systems?). She’s careful to tell her audience what she does and does not know, and adds in anecdotes from her own life to supplement the scientific material gathered here–the last page of the book includes Angier’s hopes for her daughter, then a small child. This is the heart and soul of the book; helping women redefine their bodies away from a male perspective.

This isn’t to say that it can’t be a bit dry; my mind was wandering off as we probed the intricate details of estrogen, and wandered back in when Angier started in on social theory, contrasting patriarchal humans to matriarchal primates. I think part of this stemmed from the fact that, as a feminist and a reader, I’ve seen some of this before. I’m also not a mother (nor ever plan to be one), so some of the particularly beautiful ideas and moments concerning motherhood sailed past me. (I was, however, properly awed by the fact that women retain, in their bloodstream, cells from each and every one of their children–they are forever linked.) There’s also the lack of a chapter on transwomen, although intersex women get a chapter of their own to dismiss the idea that sex and gender are clear-cut and always correlate. But Woman: An Intimate Geography is an immensely important piece of work, taking a much more scientific stance than, say, The Female Eunuch. This is the sort of thing a cisgendered woman ought to read at least once, and I can see this being a particularly lovely book to give to a teenage girl, to help them see their bodies as not something to be ashamed of or hide, but to celebrate and love. And anything that does that is a good book in, well, my book.

Bottom line: In Woman, Natalie Angier presents dozens of gem-like ideas about the female body to counter the evolutionary biology she’s so sick of and help women to understand and celebrate their bodies. It can get a bit dry when it deals with hormones and it does lack an chapter on transwomen, but it’s a book that I think definitely benefits cisgendered women, helping us redefine our bodies away from a male perspective.