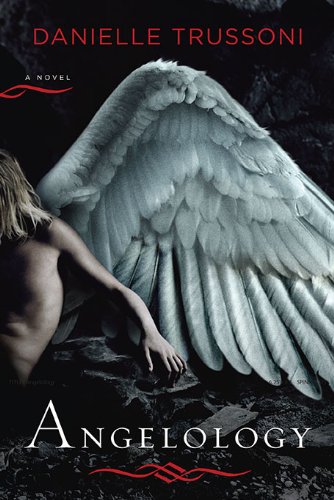 Eva of A Striped Armchair recently put up a post where she discussed Angelology and aptly described it as “if Dan Brown had written The Historian with angels instead of vampires”. I went back through my reviews to see what I had thought of Angelology (this useful ability is one of the reasons I started a book blog), and discovered that I had never posted the review I’d written at the beginning of July! I now correct that oversight, and present you with my review of Angelology… and you know I despised The Historian, right?

Angelology starts off when Sister Evangeline, of the Franciscan Sisters of Perpetual Adoration, receives a request from an art historian, Verlaine, for access to letters sent between Mother Innocenta, a former abbess, and Abigail Aldrich Rockefeller concerning an artifact from Eastern Europe. Curious, Sister Evangeline researches them for herself–an act that forces her to confront her past, discover the true purpose of the Franciscan Sisters of Perpetual Adoration, and come face to face with Verlaine’s mysterious employer, Percival, one of the evil Nephilim, a product of the unholy union between angels and humans.

Angelology’s problems start with the structure of the novel. It’s separated into four parts; parts one, three, and four occur in 1999, as Sister Evangeline and Verlaine race to stop Percival from getting his hands on the ancient artifact discussed in the letter, a lyre. Part two, however, makes a sharp detour into the 1940s and the expedition that uncovered the lyre, as told by another Sister of Perpetual Adoration. The story itself is interesting, although I didn’t like the decision to tell it in first person since it wasn’t framed as a story told to Sister Evangeline. However, placing it smack in the middle brings the action of the 1999 story to a screeching halt. Considering that the 1999 story takes place in the space of two days, it’s  painful. I would have vastly preferred to see the stories alternate in third person, which wouldn’t have slowed the momentum down as much as the actual structure does. It’s very frustrating.

I quite liked Sister Evangeline, although I grimaced when she (of course!) falls for a man within a day of meeting him and being forced to leave the convent. I should really stop hoping that unnecessary romantic subplots will just die off, shouldn’t I? (Indeed, the minor romance motivates only one scene that could have easily been written around. Ugh.) While I felt her initial impulse to start researching Mother Innocenta and Mrs. Rockefeller was a bit weak, I liked how matter-of-fact she was and how controlled she liked her environment. Verlaine, the male lead, did not exactly endear himself to me with his negative image of nuns, but he’s suitable, with a weakness for nice things and wanting to redeem himself once he realizes what’s happening. The best characters, however, are the villainous Nephilim themselves. Percival’s motivation is wonderful, and his hilariously named sister, Otterly, is so cool and efficient that I was quite surprised by the twist in her story. The only problem is that, for whatever reason, Trussoni often makes her characters speak so unnaturally that it’s almost funny. (Almost.) When characters relate stories of their past, they tell them as if they’re novelists themselves, which makes me suspect that their stories were originally written out as narrative before being changed to dialogue during the writing process. It’s distracting and contributes to the halting pace for what should be a snappy thriller.

I do have to hand it to Trussoni, though, when it comes to worldbuilding. Her explanation of how wings work for Nephilim and angels is just brilliant–they’re part of their lungs! I’ve no idea if this is based off any biological possibility, and I don’t care, because it’s so cool. Everything related to the history of the Nephilim and the lyre, especially the lyre’s uses, is quite well done, and Trussoni resists the impulse to tell us too much, especially in places where it’s very tempting, like the training academy for angelologists. However, how she tells it is less successful. The term Nephilim first crops up in a chapter from Percival’s point of view, but it’s not explained until the next chapter, which very much annoyed me–either remove the term for dramatic suspense (is the villain an angel?) or explain it there. I think this is related to the faulty structure; the raw materials are pretty good, but they’re put together poorly.

I do have a problem with the ending, but I’ll try not to spoil anyone–let’s see how this goes! After establishing that the Nephilim are evil and soulless beyond a doubt, we encounter one Nephilim who is pondering their fate. For a moment, I thought Trussoni was going to go with a delightfully ambiguous ending, like The Magicians (well, not anymore; good one, Grossman), where the Nephilim would commit suicide (or not!) since all Nephilim have been established as evil. But it ends on an note that clearly indicates which way it goes, which absolutely frustrated me. It basically brushed aside all the internal logic about the Nephilim aside for the sake of this specific Nephilim. That absolutely violates a main tenet of speculative fiction, or even just general fiction, to me; once you establish a certain thing, you can’t go back and say, “Oh, well, this character is just special.” (Stephenie Meyer barely gets a pass for what she did with vampire reproduction in Breaking Dawn, partly because she did try to justify it and partly because the results were hilarious.) The ending is ultimately what soured me against this book.

Bottom line: An interesting premise and solid worldbuilding suffer fatally from a flawed structure and an ending that throws the internal logic to the winds in Angelology. Disappointing.