I recently finished judging for Book Blogger Appreciation Week, which added a considerable amount of new books and blogs to the list and the RSS Feed. Two of the books I ran across are young adult fantasy novels with heroines–something I’ve never mentioned on this feature, right? (I appear to have an infestation of young adult fantasy on my list! It’s the best kind, really.)

Keturah Reeve is a beautiful young woman of sixteen who lives with her grandmother in a cottage near the forest owned by Lord Temsland. Keturah is renowned in the village for her captivating storytelling, and this beautifully woven novel is a response to a request from Keturah’s eager audience for yet another of her fascinating tales. She tells of her experience of being lost in the forest, her eventual meeting with a dark figure on horseback who is Lord Death and her bargaining with him for her life-and for the lives of the villagers who are threatened by an onset of the plague.

With its richly textured medieval setting, Keturah’s story exposes the tensions and desires of the villagers, the dangers that loom in their future and how they place Keturah’s life in jeopardy. Keturah’s escalating bargains with Lord Death allow her to protect her friends and reveal to them their true talents and destinies. But even as she negotiates with Death, she becomes more isolated from the people she is seeking to protect and seems less and less likely to achieve the dreams of her own heart.

The startling resolution of the novel confirms Martine Leavitt’s reputation as a treasure of a writer, a storyteller who can weave magnificent spells. Leavitt confronts readers with issues and revelations that, while they occur in a setting far from their own experience, bear the intimacy of next door.

Keturah and Lord Death caught my eye simply because of the title. I don’t normally go in for overt romance in my novels, but I can deal with it. There’s also the Scheherazade-esque nature to her story, but I doubt it’ll hew so closely that it’ll make me uncomfortable. (How would one respond to whitewashing something like the The Thousand and One Nights?)  The frame story does give me pause, as I’d rather read a straight story, but it still interests me.

Julie at A Small Accomplishment adored the lead characters as well as the book itself, although the prologue needed to be cut. (Uh oh.) Angie at Angieville enjoyed the setting, but thought the book needed to be much more fleshed out. Sounds like my usual take on YA romance–hit or miss. 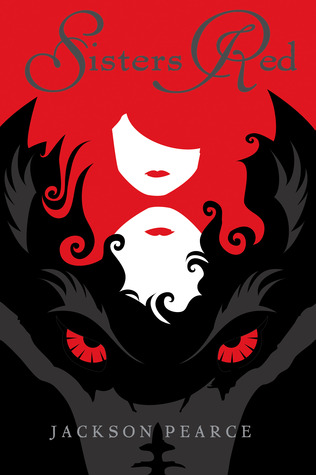 Scarlett March lives to hunt the Fenris–the werewolves that took her eye when she was defending her sister Rosie from a brutal attack. Armed with a razor-sharp hatchet and blood-red cloak, Scarlett is an expert at luring and slaying the wolves. She’s determined to protect other young girls from a grisly death, and her raging heart will not rest until every single wolf is dead.

Rosie March once felt her bond with her sister was unbreakable. Owing Scarlett her life, Rosie hunts ferociously alongside her. But even as more girls’ bodies pile up in the city and the Fenris seem to be gaining power, Rosie dreams of a life beyond the wolves. She finds herself drawn to Silas, a young woodsman who is deadly with an ax and Scarlett’s only friend–but does loving him mean betraying her sister and all that they’ve worked for?

I know, I know, I need to stop reaching for pretty covers, but… holy crow, just look at it! A dark reimagining of Red Hiding Hood with a dash of Snow White (redheaded sister and black-haired sister), complete with hunting and vengeance. I always like redheads with eyepatches, so that’s just the icing on the cake! (Also, Jackson Pearce? She’s from Atlanta. Georgia, represent!)

Cindy Hannikman at Fantasy Book Critic enjoyed it, but notes that’s very, very dark (save for a weirdly bubbly romance) and that the plot can seem a little thin. Nicole at Linus’s Blanket loved the treatment of the issue of identity and humanity in the face of unpredictable and horrific violence, but was also disappointed in the romance subplot. I think I’m going to roll my eyes at this romance, but I also think I’ll enjoy the rest of the book.