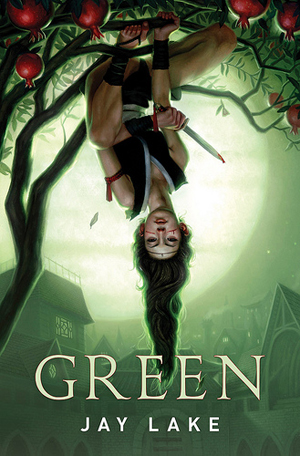 Green is definitely an example of a book that turned my head with an exquisite cover. An Asian girl hangs upside down from a fruit tree, cuts on her face and a vague, European city behind her. Despite the obnoxious piece of copy (“Her exquisite beauty and brilliant mind were not enough to free her from captivity. That took the power of a goddess… and her skill with a knife.”), the post-colonial fantasy the summary promised sounded quite interesting.

I really need to stop gravitating towards pretty pictures, don’t I? (Although now I have discovered the work of Daniel Dos Santos, so it’s not a total loss.)

Green follows the life of the self-named Green, a girl sold at a young age and taken from her rural home across the sea to be trained as the perfect woman to add to the Undying Duke’s collection of women. Green receives more training than a usual slave; the man who took her, Federo, and a pardine (wolf-like) lady, the Dancing Mistress, train her in subterfuge and combat to a secret end. But Green has determined that she will be the tool of no man and no god, and her rebellious nature will forever conflict with a city whose politics will hunt her around the world.

Green starts off with a great deal of potential, and I was irritated to watch it waste a lot of that potential. Green is separated into three distinct story arcs–Green’s slavery, Green’s new life in a Temple back home, and Green’s return to Copper Downs, the scene of her slavery. The first arc is absolutely fascinating, the very sort of post-colonial fantasy I like to read. I especially loved the use of Green’s continual attempts to remake her belled silk, an important part of a rural Selistani woman’s life, as she can’t help but adapt to the life she lives now, always wanting to return to where she belongs. I love fantasy because it allows us to examine parts of the human condition and experience in different ways, and the first arc of Green raises plenty of interesting questions about imperialism, sex slavery, and child-trafficking. It’s actually quite self-contained, and the book could have ended after Green’s slavery arc as a satisfactory novella.

The second arc is also somewhat interesting, especially once Green has a chance to return home and see what her life would have been like had she not been sold–brutal and short, further complicating the issue of her slavery. I enjoyed seeing the Southeast Asian-inspired part of Jay Lake’s world in the second arc. But the third arc, which drags Green back to Copper Downs and has her fight gods, was just a slog for me. All those interesting social issues were abandoned for epic battles and political intrigues, and the few nuggets of world-building, like the Orchard of the Dead and Green’s frustratingly short encounter with another woman raised in slavery like she was, can hardly begin to make up for it. Especially frustrating was Green’s quest to stop child trafficking, although I suppose it’s done indirectly after the final battle. I enjoyed the first arc so much that I was absolutely crestfallen to see that the other two arcs abandoned so much of what I had enjoyed. I also think the second and third arcs suffer for their unnecessary sexuality.

I consider myself a fairly open-minded person when it comes to sexuality, probably because I’m ace–there are so people who straight up don’t believe in asexuality (I’m Tinkerbell, guys!) that I say live and let live when it comes to anything between consenting adults. But I feel there’s too much of it in Green. It’s stated and more firmly implied that sex and orgies are institutionalized parts of religious orders, which is all fine and dandy, until you realize Green is sixteen or younger during her time at the Temple and she has often slept with her teachers. She suddenly sleeps with a traveling companion for no other reason than to make his death supposedly more meaningful and impregnating her. Aces occasionally define themselves by who they’re romantically attracted to; Green comes across as a woman who is incapable of romantic connection, only sexual connection. This would be fine if she wasn’t underage for the entirety of the novel. Add to that the fact that Green is dedicated to Jay Lake’s daughter thusly: This book is dedicated to my daughter whose story it is. Someday she may choose to reveal which parts are true and which parts were made up by her dad. That just isn’t right, people. (Oh, and there’s a scene involving menstruation that’s on par with Gregory Maguire’s misunderstanding of it in Mirror Mirror. Gentlemen, believe me when I say it’s not that big a deal.)

If you think Green sounds interesting, I highly recommend picking it up and then stopping around page 180. That way, you can enjoy everything I did without the bitter disappointment of reading the rest of it.

Bottom line: After an interesting first third that uses the story of the titular Green to examine child trafficking, slavery, and imperialism, all of these interesting issues are thrown to the wayside in favor of epic battles and needless constant sexual encounters for the underage Green–kind of creepy in a novel that declares itself, in the dedication, to be the story of the author’s daughter. Despite its immense potential, give this one a miss.