Good Show, Sir, the blog that encourages readers to photograph terrible speculative fiction covers and send them in, is a constant source of delight and nostalgia for me. It’s just good clean fun with lots of weirdly muscular cat people involved. However, there are these covers that I’m itching to send into Good Show, Sir, that I can’t, because I can’t produce pictures of it in the wild (although I have run across the fourth and most hilarious cover in the wild, and neglected to take a picture). While I’ve discovered the first of them, you really need the other three to appreciate the entire picture. So, in tribute to Good Show, Sir, I give you the… interesting covers to the fifth Ballantine Books edition of The Lord of the Rings.

Ballantine Books has a history with the good Professor Tolkien’s work, being one of his first US publishers after the unauthorized American editions were dealt with. For the most part, the art selected by Ballantine Books to grace the covers of The Hobbit and The Lord of the Rings are decent, despite the extremely trippy first American edition (which Tolkien despised). They used artwork by Tolkien himself, as well as the work of Darrell K. Sweet; while Sweet’s covers are hardly masterpieces, they’re a legitimate interpretation of the series and the cover for The Hobbit is quite charming (which is why I keep one around). After the fifth edition, Ballantine Books uses work by Ted Naismith to decorate the covers when they’re not using film stills from Jackson’s The Lord of the Rings film adaptation.

The fifth edition is something to behold, I feel. It boasts artwork by Michael Herring, who is, I am sure, a fine, upstanding gentleman and actually a very good artist. All of these covers are technically quite good. It’s the design philosophy and the interpretation that makes them, well, hilarious. (If the gentleman in question is reading this, let me be the first to say that this is all in good fun. Thank you for these covers.) Let’s dig in.

This was actually my first exposure to The Hobbit. Yes, this adorned the copy of The Hobbit that every child in my fifth grade Enrichment class received to read along. While the Bilbo isn’t too bad, it’s the alien Gollum that gets me. Quite technically, you can make this interpretation from the description of Gollum, which does describe him as “dark as darkness” with “two big round pale eyes”, but this is a Gollum I can’t quite see playing at riddles in the dark. 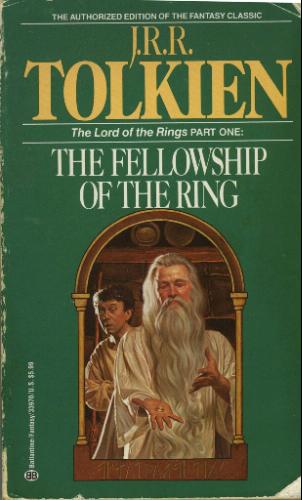 Out of all four of the covers, this is actually the best. While I’m a bit concerned about Gandalf’s expression (and the fact Frodo looks a bit dopey), it’s a legitimate interpretation from the character descriptions (although shouldn’t Gandalf be… grey?). Gandalf’s absolutely pristine nightgown still makes me laugh, though. 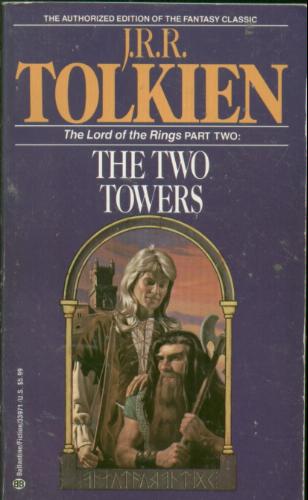 This was truly the largest image of this cover that I could find. As I parsed my way through the bonus material on my The Lord of the Rings DVDs, I watched the design team talk about just how to incorporate bird’s wings in the Gondorian helms and helmets, something that was specifically outlined in the books. What Aragorn here is sporting is exactly what they were trying to avoid. Between that and the light source that is either emanating from him or above him, you get a very strange cover indeed.

In other news, my reading has been going quite well. I finished the wonderful Tooth and Claw by Jo Walton, and I’m currently reading This Book is Overdue! by Marilyn Johnson, which is quite interesting. I had to turn in The Irresistable Henry House without reading it, which annoyed me, but I hope the next person on the hold list enjoys it. Yesterday, I went to a casting call in Atlanta, which involved standing around in the sun for about three hours, but at least I wasn’t one of the poor souls who was turned away at the end of the line, though I was quite close. (It at least gives me a new endurance record–three hours for hot sun to add to my nine hours for very, very cold!) I’ve also been feeling very warm and fuzzy towards VHS tapes recently, which my library is rife with, so I took home a copy of Robin Hood: Prince of Thieves, which was ridiculous and hilarious. Alan Rickman chewing scenery faster than they can make sets, quite honestly.

What ridiculous book covers have you run across in your bookish wanderings?

4 thoughts on “The Sunday Salon: Good Show, Sir (A Tribute)”